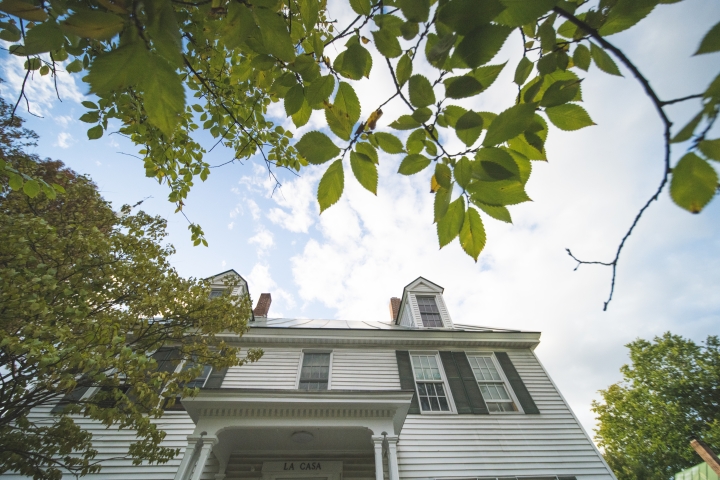 Representatives of La Casa, the Spanish and Portuguese department’s living and learning community, helped organize an event for the celebrations. (Photo by Katie Lenhart)
9/29/2022
Body

Food, music, lawn games, and more are on the menu for today’s kick-off of a monthlong celebration of Latinx and Caribbean history. The event from 4 to 7 p.m. on the lawn of the Shabazz Center for Intellectual Inquiry will also feature the release of the full celebration calendar.

The student-led celebration is designed to raise awareness of Latinx and Caribbean culture and the contributions of Latinx and Caribbean people in the U.S. and on campus. The student organizers, convened by the Office of Pluralism and Leadership, are also collaborating with other student groups and offices on intersectional programming, says Angélique Bouthot, program coordinator of community and leadership development at OPAL. The rain location for the kickoff event is the Latin American, Latino, and Caribbean House at 38 N. Main Street.

Students want to talk about the ways Latinx and Caribbean communities have both shared experiences and also hold unique cultural differences.

Attribution
Angélique Bouthot, program coordinator of community and leadership development at the Office of Pluralism and Leadership

This year, students chose to include Caribbean history in the celebration title, Bouthot says. “Students want to talk about the ways Latinx and Caribbean communities have both shared experiences and also hold unique cultural differences.”

That’s also reflected in this year’s theme—“Under the Same Moon,” which was inspired by the 2007 Mexican-American film Bajo la Misma Luna.

The theme emphasizes unity among the Latinx and Caribbean communities that exist at Dartmouth, according to a statement provided by the student planning committee, led by Briana Maldonado ’24 and Monzerrath Sandoval ’25. It acknowledges “the nuanced differences in culture and traditions among people in our communities, as well as various shared experiences, including resistance, resilience, and vibrant celebration.”

Some of that vibrancy will likely come through on Friday at 9:30 p.m., when the electro-cumbia act Terror/Cactus, and New York-based Colombian rock quartet Combo Chimbita take the stage at Sarner Underground. The show is sponsored by the Sykes Concert Fund, Collis Center, and the student organization Friday Night Rock, with support from OPAL’s Latinx and Caribbean History Celebration Committee.

Muxes, pronounced mu-shay, are a recognized third gender among the Zapotec indigenous people in the Mexican state of Oaxaca. They are born men but identify with roles often associated with women.

“In the U.S., we call them the third gender, but in their language Zapotec, there is no masculine, no feminine, no grammatical genders,” says María Clara de Greiff a Spanish lecturer, co-founder of FUERZA, and the live-in faculty member at La Casa, the Spanish and Portuguese department’s living and learning community. “They do so much for the community, and are respected, loved and visible. They are a social gender, as opposed to a sexual one.”

The event will feature a screening of Mitzary—Muxe and the Visibility of Otherness, by award-winning documentarist Tonatiuh Ramírez Rocha. The film is about Mitzary Regalado, who was crowned Queen of the Muxes for 2022. A conversation with Regalado will follow the showing. 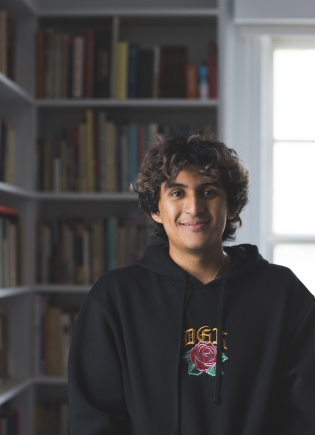 Edgar Morales ’24, a La Casa undergraduate advisor who helped organize the Muxes event, says it celebrates a gender that is “not within this binary that we are so used to seeing.”

“This is an important conversation that we need to have, especially moving forward as we start to deconstruct these gender norms that we have set for ourselves, and more specifically within the Latinx and Hispanic community,” says Morales, who’s majoring in English and Latin American, Latino, and Caribbean studies.

De Greiff, an independent journalist and co-founder of FUERZA, says this month should be not only a celebration of history, cultures, and traditions, but also of “seeing each other and saying, ‘Yes, you’re here. Yes. Thank you.’ Because I can learn something from your culture, and then my culture is going to be richer.”

A related digital exhibit explores Latinx student experiences at Dartmouth and the development of Latin American and Caribbean Studies and Latino Studies on campus. The exhibit was created last spring by students in Introduction to Latino Studies, taught by Bryan Winston, a former postdoctoral fellow for the Dartmouth Digital History Initiative. It focuses largely on the late 1970s to the early 2000s.