Gillibrand ’88 Honored as the First Alumna in Congress 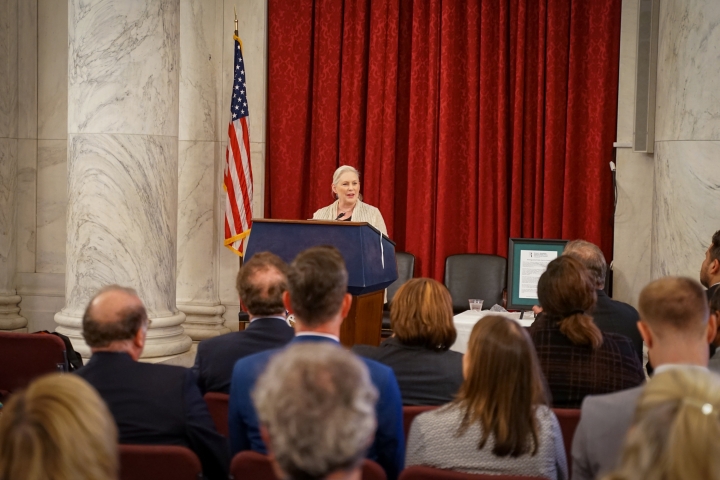 Sen. Kirsten Gillibrand ’88, D-N.Y., receiving the Nelson A. Rockefeller Distinguished Public Service Award at a ceremony in the Russell Senate Office Building on Capitol Hill on Sept. 27. (Courtesy of the Office of Sen. Gillibrand)
10/07/2022
More Reading

Gillibrand '88 Returns as a Presidential Candidate

The Nelson A. Rockefeller Center Board of Visitors presented Sen. Kirsten Gillibrand ’88, D-N.Y., with the Distinguished Public Service Award at a ceremony in Washington last week.

Timothy Harrison ’78, chair of the Rockefeller Center’s board of visitors, who presented the award in the Russell Senate Office Building on Capitol Hill on Sept. 27, noted that Gillibrand, following her election to the U.S. House in 2006, became the first Dartmouth alumna to serve in Congress.

“Your career is an object lesson on leadership and civic engagement,” Harrison told Gillibrand at the ceremony. “You are an inspiration to the many young leaders who seek their education at Dartmouth College. You evoke the very best of the pragmatism, values, character, and spirit of Nelson Aldrich Rockefeller ’30.”

Gillibrand said she is proud “being part of this community, of what the Rockefeller Center has done, certainly since I was a student. I had a Rockefeller social science grant to intern at Senator (Alfonse) D’Amato’s office when I was a student. They gave me $500 so I would have a stipend and so I could tell my mother I was making money. And I worked all summer at Alfonse’s office.”

Gillibrand said one of the lessons she learned during her time at Dartmouth that has stayed with her in the Senate “is to be resilient and never shy away from life’s toughest challenges. It’s in those moments that we really learn what we’re all made of.”

Senator Gillibrand has a long history of leadership and civic engagement at the highest levels, serving as an inspiration to many Dartmouth students.

Attribution
Jason Barabas ’93, director of the Nelson A. Rockefeller Center for Public Policy

“Sen. Gillibrand has a long history of leadership and civic engagement at the highest levels, serving as an inspiration to many Dartmouth students,” Barabas says. “During the award ceremony, the senator linked her career in public service to an internship she had while in college, which reminds us of the important role that Rocky plays in developing the next generation of public policy leaders.”

Gillibrand majored in Asian studies at Dartmouth and serves on the Senate Intelligence and Armed Services committees, among other panels. After serving two years in the U.S. House, she became a senator in early 2009, taking over the seat vacated when Hillary Rodham Clinton was appointed secretary of state. Early in her Senate tenure, Gillibrand successfully helped push for repeal of the “Don’t Ask, Don’t Tell” policy which discriminated against LGBTQ members of the military. She briefly ran for president in the 2020 cycle.

Also at the event honoring Gillibrand was her Senate colleague, Rob Portman ’78, R-Ohio, a past recipient of the Rockefeller award and a former member of the board of visitors.

The award was established in 1990 to honor Rockefeller, a longtime Republican governor of New York who served as vice president during the Ford administration.

The board voted to honor Gillibrand in 2020 but delayed presentation of the citation during the COVID-19 pandemic until members could meet again in person. Other past winners include Sen. John Hoeven ’79, R-N.D., the late Surgeon General C. Everett Koop ’37, former Secretary of Labor Robert Reich ’68, and former Democratic National Convention Committee CEO Leah Daughtry ’84. 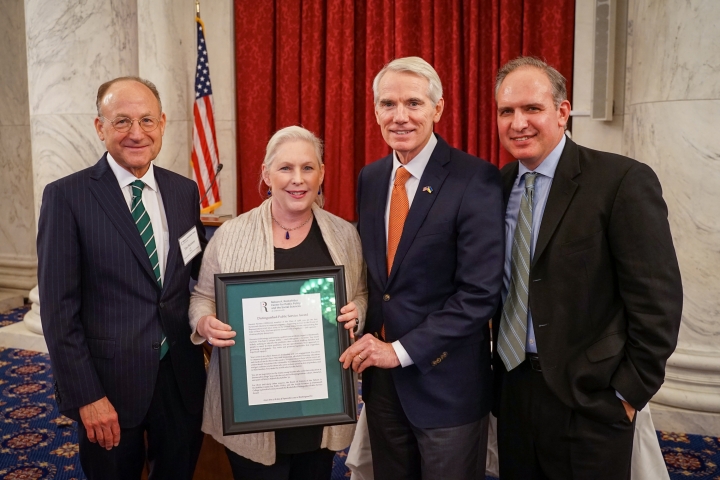 From the left, Timothy Harrison ’78, chair of the Rockefeller Center Board of Visitors; Sen. Kirsten Gillibrand ’88; Sen. Rob Portman ’78, and Jason Barabas ’83, center director. (Photo courtesy of the Office of Sen. Gillibrand)
Written by
Bill Platt
Share this
FacebookTwitterEmail
Articles