The weekend celebration, Nov. 11-12, features the rededication of Dartmouth Hall. 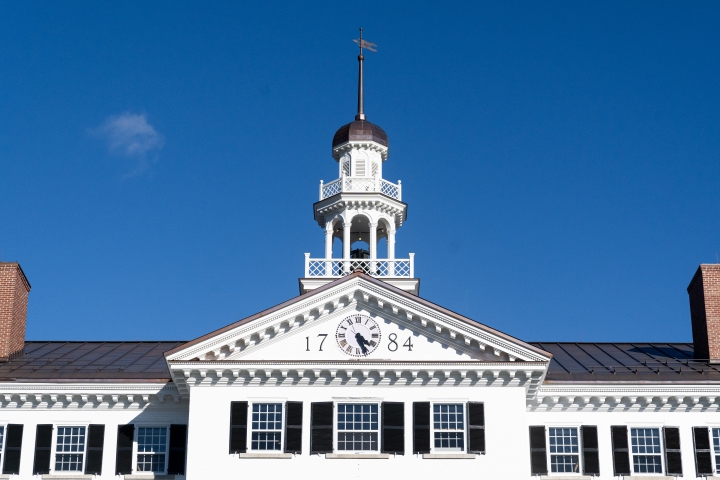 The newly renovated Dartmouth Hall reopened last month and will be rededicated on Nov. 11 during a weekend celebrating 50 years of coeducation at Dartmouth. (Photo by Julia Levine ’23)
11/02/2022
More Reading

Mark your calendars: A Celebration of Women: 50 Years of Coeducation at Dartmouth, featuring eight panel discussions with alumnae from a range of fields, a conversation with Dartmouth’s president-elect, and a ceremony to rededicate the newly renovated Dartmouth Hall, is set for Nov. 11 and 12.

More than 1,200 people are expected to attend in person or watch the events over livestream. The weekend will celebrate women’s contributions to shaping Dartmouth, highlight their fields of expertise, and foster connections between alumnae, students, and faculty.

Dartmouth Hall—one of the most iconic buildings on campus—reopened last month following extensive renovations made possible by the largest alumnae-led fundraising effort in Dartmouth’s history.

“We are thrilled to be able to gather together to commemorate these landmark events,” says President Philip J. Hanlon ’77.

“Dartmouth women have been making history for 50 years, both on campus and beyond,” President Hanlon says. “Their extraordinary efforts to support the renewal of Dartmouth Hall will benefit the Dartmouth community now, and for generations to come.”

The weekend will be an exciting opportunity to explore and celebrate the newly reimagined Dartmouth Hall, which emerged from the remarkable vision, leadership, and generosity of Dartmouth women.

In 1971, the Dartmouth Board of Trustees voted to admit women as full matriculating students, effective Sept. 1, 1972. The celebration honoring Dartmouth women will wrap up a year-long series of events commemorating 50 years of coeducation.

The Dartmouth Advancement division and several volunteer groups collaborated to present the coeducation weekend, which features alumnae-led panels, social activities, and a career networking session with alumnae and students.

The opening events on Nov. 11 include a reception, sponsored by the classes of 1976, 1977, and 1978, for the exhibit Fifty Years of Coeducation at Dartmouth—Resistance, Persistence, and Empowerment from 2 to 4 p.m. in Reiss Hall, in Baker-Berry Library. An open house and tours of Dartmouth Hall will run from 3:30 to 4:30 p.m., followed by the rededication ceremony at 4:30 p.m., on the lawn in front of the building.

“The weekend will be an exciting opportunity to explore and celebrate the newly reimagined Dartmouth Hall, which emerged from the remarkable vision, leadership, and generosity of Dartmouth women,” says Cheryl Bascomb ’82, vice president for alumni relations. “It also will showcase alumnae contributions to Dartmouth, and to the world, as Dartmouth women continue to make history with their groundbreaking work in myriad professions.”

The panel topics are varied and wide-ranging, featuring stories from world-class athletes; panelists in acting, comedy, playwriting, and filmmaking; discussion of the landmark Title IX civil rights law; a panel on disinformation in the digital world; another on human rights in the U.S. and internationally; corporate decision making and how Dartmouth alumni can advance participation of women in corporate governance; and a panel on the climate crisis.

The renewal of Dartmouth Hall can be traced to 2018, when a core group of alumnae challenged Dartmouth women to raise $25 million to support the renovation. Their call was answered by more than 3,200 donors—including 2,712 alumnae—and also by parents, families, and friends who made gifts totaling $26.1 million, with more than $1 million going to the Dartmouth Hall 250th Anniversary Alumnae Scholarship Fund. The effort, which was the largest alumnae-led fundraising campaign in Dartmouth’s history, signaled a new standard nationally for alumnae-led philanthropy in higher education.

Construction of the original Dartmouth Hall, the first building on campus, was completed in 1791. Often referred to as “The College,” it was, over the years, home to the chapel, recitation halls, the library, and dormitories, according to a reprint of a lecture by Dartmouth English Professor Francis Lane Childs, Class of 1906, that appeared in the December 1957 issue of Dartmouth Alumni Magazine.

The original hall burned down on Feb. 18, 1904, and alumni quickly raised funds for a new building, according to Childs. The current Dartmouth Hall was completed in 1906.

The building is now fully accessible. The plumbing, heating, and electrical systems have been updated, as have the offices and classrooms. Fresh landscaping, open staircases, and new skylights contribute to a bright, inviting atmosphere. 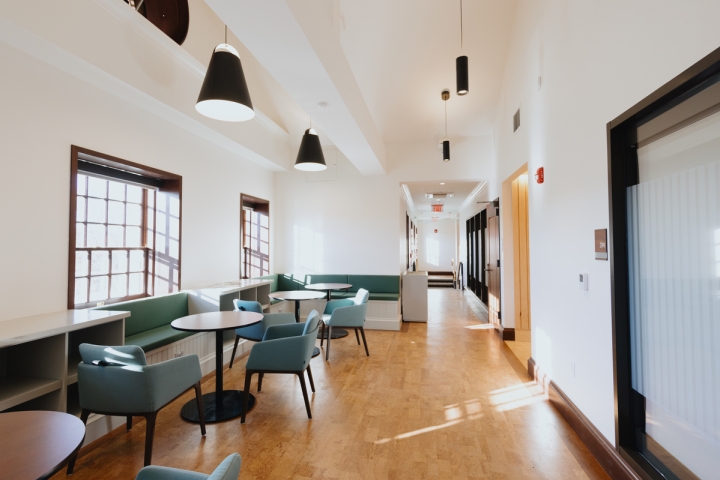 The fabulous new classroom spaces will “allow our students to have a state-of-the-art classroom experience in this venerable old building,” says Barbara Will, the A. and R. Newbury Professor of English and vice provost for academic initiatives who has been deeply involved in advising on the academic goals and impact of the Dartmouth Hall renovations.

Dartmouth 105, an auditorium where the Rev. Martin Luther King Jr. spoke in 1962 to an overflow audience, has been transformed. The only room to keep its original number is now an amphitheater-style space for teaching, lectures, and performances that can seat about 100 people.

Dartmouth Hall is now home to the Leslie Center for the Humanities and the departments of German Studies, French and Italian, and Spanish and Portuguese. Cozy new study spaces are located throughout the building. And, on the garden level, displays chronicle the history of Dartmouth Hall and the experiences of women at Dartmouth over the last half century.

“Consolidating the Leslie Center into Dartmouth Row reaffirms the central role of the humanities in the liberal arts education we offer,” says Elizabeth Smith, dean of the Faculty of Arts and Sciences. “On behalf of the faculty, we are all deeply grateful for the extraordinary alumnae who made this historic renovation possible, and for the dedicated design and construction team who transformed their vision into reality.”

The exhibits tell “an important story about what we value as a campus,” Will says. “I’m really excited about them being open to not just the Dartmouth community, but to anybody who comes to Hanover and wants to know more about the College.”

The weekend’s events will feature panel discussions with alumnae in fields ranging from politics and professional athletics to entertainment and environmentalism and will include a conversation between Board of Trustees Chair Liz Lempres ’83, Thayer ’84, and President-elect Sian Leah Beilock, scheduled for Saturday at 1:45 p.m. Susan Dentzer ’77, a former trustee chair, will introduce the conversation, which will be livestreamed.

The morning keynote panel discussion is “When Dartmouth Women Lead: Creating Space for New Voices and Perspectives,” on Nov. 12 at 9 a.m. The panelists are Laurel Richie ’81, a former chair of the Board of Trustees; Alice Ruth ’83, Dartmouth’s chief investment officer; former trustee and Pulitzer-Prize winning historian Annette Gordon-Reed ’81; Esi Eggleston Bracey ’91, president of Unilever USA; and Allie Miller ’10, a tech angel investor. The panel will showcase inspiring stories from alumnae in technology, academia, sports, investing, and business who have had an outsized impact on society. Former trustee Emily Bakemeier ’82, the vice provost for arts and faculty affairs at Yale, will moderate the panel, which will be livestreamed.

The afternoon keynote panel, also to be livestreamed, “Women’s Rights are Human Rights: In the U.S. and Around the World,” is scheduled for Saturday at 2:40. Panelists Tina Dooley-Jones ’82, Becca Heller ’05, Tanya Ghani ’03, and trustee Connie Britton ’89, who will be joining virtually, will discuss organizations that have promoted women’s safety, security, and equality. The moderator will be trustee Eileen Chamberlain Donahoe ’81. A recorded interview with Sen. Kirsten Gillibrand ’88, D-N.Y., will be included in the panel.

The complete schedule includes the names of alumnae panelists and indicates which events are to be livestreamed.