More Dartmouth students participate in internships than at any other Ivy League school, and Dartmouth ranked No. 3 in a new U.S. News and World Report list of the top 10 universities with the highest rates of graduating seniors with internship experience. 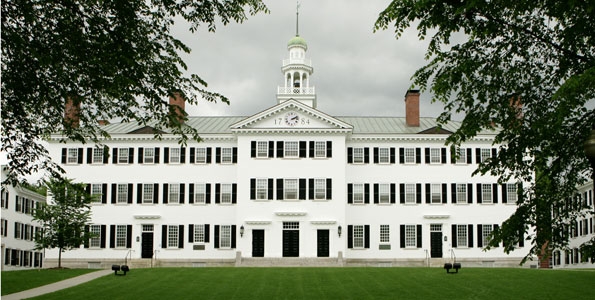 Dartmouth is ranked No. 3 in internships in a new “Short List” ranking by U.S. News. (photo by Joseph Mehling ’69)

In other U.S. News rankings, Dartmouth is:

American University, ranked at No. 82 overall, topped the Internship list at No. 1, with 85 percent of its seniors participating in internships. Colorado School of Mines was No. 2 in Internships, with 81 percent of the engineering and applied science university’s students gaining work experience. Mines was No. 75 in the overall ranking. No other Ivy League school made the top 10 Internship ranking.

Internships give students an advantage in a tight job market, an assessment underscored last month by the President’s Council on Jobs and Competitiveness, which announced that 45 leading industries have committed to doubling their engineering internships. The Council is chaired by Dartmouth Trustee Jeff Immelt ’78, the CEO of GE, which is among the industries increasing opportunities for students.

“Employers are always excited to hear about the breadth and depth of internship experiences that Dartmouth students have acquired,” said Wilson.

The Internship rank is one of a number of “Short Lists” published by U.S. News using data submitted for its overall Best Colleges rankings. The Freshman Retention, Campus Housing and Fortune 500 CEO Degrees are also among the Short Lists.

Date
5/06/2016
Body
Dartmouth is No. 1 on College Magazine’s list of the top 10 colleges and universities with excellent male a cappella groups.“The Dartmouth...