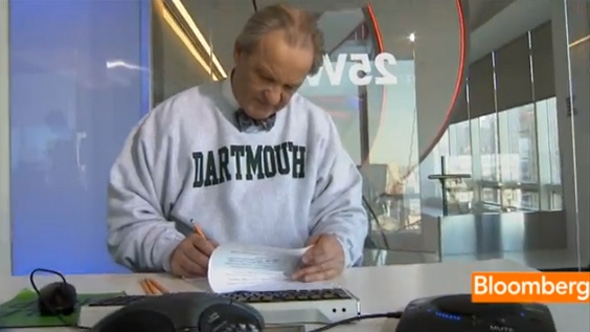 Keene had already accepted another campus challenge—participate in a practice session with the Big Green men’s hockey team, a sport the former Rochester Institute of Technology hockey player hadn’t played in more than 20 years. While shooting pre-debate interviews with faculty and students at Dartmouth on October 6, Keene actually managed to score a goal on preseason all-ECAC Hockey goaltender James Mello in a game of three-on-three. But was the host of Surveillance Midday on Bloomberg Television and co-host of Bloomberg Radio’s Bloomberg Surveillance prepared to take the same exam that William Fischel, professor of economics and Robert C. 1925 and Hilda Hardy Professor of Legal Studies, administers to his Economics 2 class? Without the aid of a calculator?

“It was ugly! I pulled an all-nighter. It was very, very difficult,” Keene admitted after completing the exam at Bloomberg’s headquarters in New York City. Interestingly, he noted that about a third of the questions pertained to the same topics the Republican candidates would face during the debate. However, Keene also said that he believed only about a fifth of politicians could answer the questions posed on the exam.

Blanchflower agreed. “It was a hard test. Dartmouth students could have done it, but it was probably too hard of a test for any of the politicians,” said Blanchflower, who is also a Bloomberg TV contributing editor. “From watching the debate, [the Republican candidates] certainly didn’t look like any of them would come near to passing it.”

When asked to comment on how the Bloomberg anchor fared, Blanchflower was tight-lipped. “Tom did fine, and I’m not going to reveal any secrets,” said the former member of the British Monetary Policy Committee. “He passed with flying colors, that’s all I’m going to tell you. Whatever his score was is a state secret. I’m sworn to secrecy!”

Written by
Jessica Chen '12
Share this
FacebookTwitterEmail
In the News