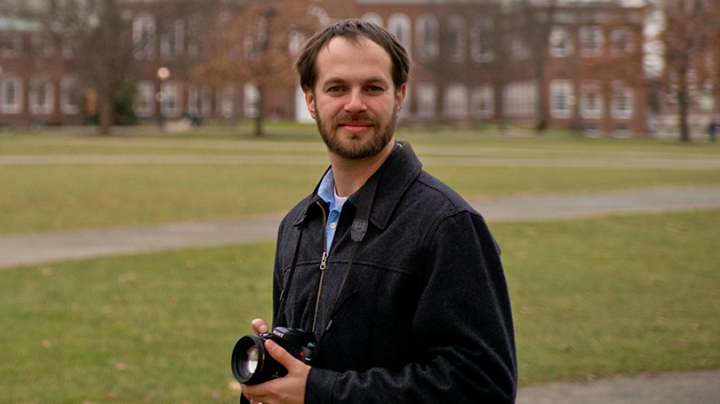 Eli Burak (who also publishes his work as Eli Burakian, a name that combines his original surname with that of his wife Julia Martiesian ’01) joined the Office of Public Affairs team this November as the official college photographer. Burak, a member of the Class of 2000, says he never expected to come back to his alma mater as a full-time staff member but found the position to be the perfect fit.

“When I heard Joe Mehling ’69 [the previous College photographer] was retiring, I immediately became excited about the position,” says Burak, who has lived in Windsor, Vt. since shortly after graduation. “I love Dartmouth, I love the region, and I love taking photos. It was a perfect fit!”

As Dartmouth’s fourth photographer, Burak hopes to “embed” himself in student life by establishing deep connections with his subjects and exploring various aspects of campus. A former manager of the College’s Moosilauke Ravine Lodge, Burak has strong personal interests in the outdoors and the Dartmouth Outing Club (DOC). But he anticipates photographing the diverse facets of Dartmouth by immersing himself in each activity.

“I’m excited about not only going out and taking pictures, but spending time with the students to get to know them,” says Burak, who grew up in Bennington, Vt. “I hope to accompany people on trips, spend quality time with them, and get more than just the superficial shots. Meeting everybody and seeing everything that this school has to offer is one of the benefits of this job.”

While at Dartmouth, Burak majored in geography with a minor in earth sciences. Outside of class, he raced on the Alpine Development Ski Team, enjoyed the outdoors with the DOC, and hiked 1,000 miles of the Appalachian Trail. During his senior year, Burak joined The Tabard, a co-ed fraternity, where he met his wife. The two were married in 2008.

Burak has spent much of the past decade as a freelance photographer. He discovered his passion for photography while traveling through New Zealand, finding himself inspired to capture the beautiful natural landscape with a camera. Despite having no formal training, he released his first self-published book in July 2009, Moosilauke—Portrait of a Mountain, revealing the simple beauty of the changing seasons in his most beloved location. That book was a finalist for the 2010 Banff Mountain Book Award.

Burak also worked as the co-photographer for a series of books published by Globe Pequot Press that cover topics ranging from chess to billiards to raising puppies. Most recently, Burak has been working on a pocket-sized “Kickass Guide” book series that will begin with The Kickass Guide to Skiing and Riding in Vermont.

In 2013, Dartmouth’s new photographer will climb Denali (Mount McKinley) as the photographer for the 100th anniversary expedition. He will be tackling the mountain with two of the great grandsons of the original summit team.

When he’s not taking photos or hiking, Burak and his wife like to spend time with their two dogs, Milton and Tigran.