Vox Populi: Under the Trees of Zuccotti Park 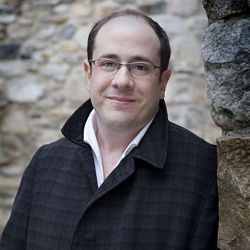 Sharlet, Mellon Assistant Professor of English, spent some part of every week between October 6 and November 15 researching Occupy Wall Street in New York City’s Zuccotti Park. The night described in this story was in early October. In addition to the piece excerpted here (originally published in Bookforum), Sharlet’s writing on the Occupy movement has been published in Rolling Stone magazine. It also appears on the Occupy Writers website, of which Sharlet is a co-founder.

Dusk falls, cars honk, the jackhammer the city has set to racketing across the street competes with the thumping aural blur of the drums down at the southwest edge of the park. Bongos is too fun a word for that ceaseless noise. There’s a celebrity of some sort beneath the three giant red girders bound together into a city sculpture on the southeast corner called Joie de Vivre. Susan Sarandon? “I just watched Rocky Horror last night,” says a policeman, delighted. A line begins to wind around the kitchen at the heart of the park—two thousand served daily, when I was there last—and the halal carts and smoothie carts and veggie carts rev up for evening supper, and the smells of falafel and grilling meat settle in with the Hasidim who as evening comes seem to flock to the park, their politics moot (a wink is all one will give me by way of explanation), some of them singing in Yiddish and Hebrew, some of them circling the perimeter along with a certain kind of well-weathered middle-aged man, scoping but not leering, contemplating, doubting, wondering. “I don’t know what these kids are doing,” says an old guy named Walt. “But I want to—I don’t know what these kids are doing.” He keeps shuffling around.

This is the “human microphone,” an adaptation of the old church style of call-and-response for the NYPD’s rule against amplification. The Spaniards have been using it so long now they consider it passé, but it came to Zuccotti Park by way of a woman named Marina Sitrin, editor of a 2005 book called Horizontalidad: Voces de Poder Popular en Argentina, since translated into English. One person speaks, the crowd repeats, everybody hears the crowd and their own voices. Born of everyday hassle, it has become one of the movement’s most brilliant maneuvers. Its humor is inherent; it is funny to repeat another person’s “like, I think.” Its politics are implicit: We will have to collaborate for any of us to be heard. And its effectiveness is stunning. As the evening’s general assembly, the daily ritual of deliberative democracy, begins, you find yourself repeating things you don’t agree with. And you watch the inevitable cranks and complainers who are forced to repeat the crowd’s pleas for them to let the meeting proceed. You become intimately aware of language, parceled out in short phrases; you reconsider which of your own words are really necessary.

The meeting moves faster than most town-council meetings. A half hour is spent on, say, a proposal to spend part of the general fund on more sleeping bags, or bins to aid in cleanup efforts, or whether to allow a visiting celebrity to jump the “stack,” the speaking line. The answers come relatively fast: yes, maybe (more debate is required), no. And each answer brings applause, some whoops, a shout: “Consensus!”

Of course, that’s not really true—there are always dissidents, angry ones, grumblers, people with better ideas, imagined and actual. And what kind of story is it, anyway, that can’t travel? Can this kind of decision making go beyond a crowd of a few hundred? How far? A few thousand? A million?

But there are always questions, and answers are like demands: They take time, and if they’re any good they’re probably not easy. Tomorrow they’ll try again. For now, there is cake: kitchen volunteers stepping over bodies, moving through the dissipating crowd with great platters of it, fluffy and frosted.

At 10 p.m., the quiet hour agreed upon with the local community board, the noise ebbs—it doesn’t vanish, just stretches out like a thin tide moving off to sea—and people begin repairing to their sleeping bags. After a beer with a few 99 percenters at a fireman’s bar around the corner, I stop by the comfort station for some bedding (bedbug free!) and lie down beneath the honey locust with The Pagan Rabbi. The night, cooler but softer than the day, is the ritual at the marrow of the Occupy movement. Like the human mic, it’s an adaptation. The police said no tents. So we all sleep together. So deep in the funk of several weeks’ camping that the smell becomes normal, so close to strangers that the strange becomes comfortable, so tired beneath the trees, the lovely honey locusts ashimmer in the yellow sodium [light], that our books fall upon our noses sometime in the early morning. What time it was, I couldn’t tell you.

Excerpted from the December 2011/January 2012 issue of Bookforum.