A Conversation with Christopher Meledandri ’81, Producer of Dr. Seuss’ The Lorax

Christopher Meledandri ’81 was understandably jazzed when Dartmouth Now caught up with him on February 28. The president and CEO of Illumination Entertainment was en route to a Dartmouth Alumni Relations advance screening event for his widely anticipated 3-D animated film Dr. Seuss’ The Lorax, which opens nationwide today. Meledandri was also buoyant because he’d just left a recording session with Al Pacino. The Academy Award- winning actor is making his animated film debut as a villain in Despicable Me 2, the sequel to Meledandri’s hugely successful inaugural Illumination Entertainment film. 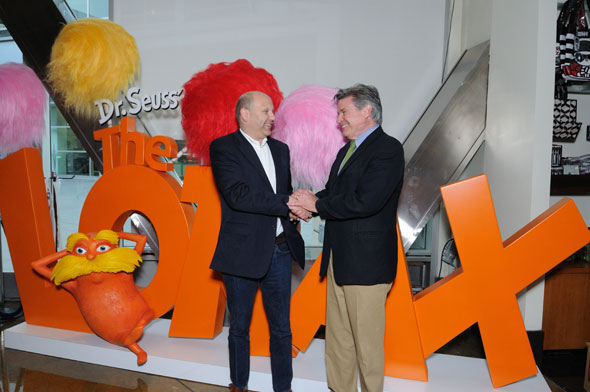 Producer Christopher Meledandri ’81, president and CEO of Illumination Entertainment, spoke to Dartmouth alumni in Los Angeles this week during a “green-carpet event” and advance screening of Dr. Seuss’ The Lorax. Meledandri is pictured with Professor Donald Pease, who wrote a 2010 biography about Dr. Seuss and also spoke at the event. (photo by Leroy Hamilton)

“That was a great experience, watching [Pacino] work and create. It was amazing,” says Meledandri, who guided 20th Century Fox’s animation division and produced Ice Age and Horton Hears a Who!, among other films, prior to founding Illumination Entertainment in 2007.

A New Yorker who came to Dartmouth with the intention of studying drama and theater, Meledandri discovered the film department at the end of his first year and says, “I just kept taking film course after film course and didn’t go back to the theater.” He found his primary mentor in department head David Thomson, but was also influenced by longtime professor Maurice Rapf and newcomer David A. Parry, who came to Dartmouth in 1979. A member of the Dartmouth Film Society, Meledandri says the films he “delved the deepest” into while at Dartmouth were Citizen Kane and Apocalypse Now.

“Both films became windows into a much broader education than simply an education about film theory,” says Meledandri. “My exploration of Apocalypse Now led me back to Joseph Conrad’s Heart of Darkness. It was really this doorway that I walked though to have a much deeper education about ideas, literature, and writing because I wrote extensively about them from a comparative point of view.”

But it was producing films, rather than writing or directing, that interested him most.

“In high school theater, what really appealed to me was how all of the various aspects of a production converged with a stage manager,” says Meledandri, whose first job after graduating was working as an assistant to legendary television and film producer Daniel Melnick (Altered States, Footloose, All That Jazz). “And I found an analogous challenge in producing, where there was tremendous responsibility on many levels. I like being involved in all the facets of a movie, from the inception of the idea to the marketing of the movie and everything in between. It can start with what ideas we’re going to explore as possible stories, to the hiring of the writers, to guiding the writing process, to choosing the directors. It’s a very comprehensive approach to producing.”

In the conversation below, Meledandri talks about Dr. Seuss’ The Lorax, his decision to focus on animated filmmaking, and his collaborations with Audrey Geisel, the widow of Ted Geisel, Class of 1925 (Dr. Seuss).

You produced a number of live action films initially. Why did you decide to shift your focus to animation?

When I was at Fox, because Cool Runnings was released as a Disney family film, I was perceived as somebody who could do family movies. They asked me to work with John Hughes, and they also asked me to help out with a new initiative to produce animation.

I of course agreed, which started a very steep learning curve for me because I knew absolutely nothing about animation. After four to five years of struggling to understand the parts that were not directly analogous to live action filmmaking, I found a level of fulfillment that became quite appealing and found myself focusing more and more on that medium.

How does animation compare to live action filmmaking?

Live action films are developed all around the writing process. And in animation it’s a marriage between words and visuals. I find that the artists’ involvement in the creation of story and character is very dynamic. I also discovered that the medium is much more rewarding for a producer who enjoys rolling up their sleeves and remaining deeply involved in the process.

It’s also invigorating to be surrounded by so many talented people who come together to collaborate on an animated film. We have probably close to 300 people working on our current movie (Despicable Me 2). It’s a very powerful process to be a part of.

Horton Hears a Who! was your first collaboration with Audrey Geisel. How did your partnership with Audrey come about?

I had pursued her to discuss my interest in adapting Horton and she agreed to see me and begin a discussion about how and what I wanted to do. And after almost a year of off and on again discussion, she agreed to proceed. 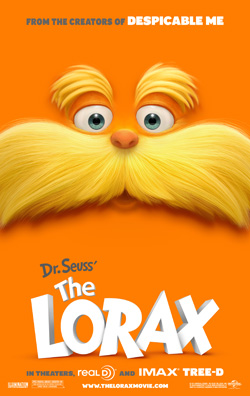 Why did you want to make The Lorax?

It started with Audrey, and her interest in it is what ignited my own. I think she’s passionate about this story for two reasons. First and foremost, I think she sees the tremendous relevance of many of the book’s themes. And secondly, I think his [Dr. Seuss’] creation of that book came at a point where it was very meaningful in both of their lives.

You added the characters of Ted and Audrey to the Lorax film, a wonderful homage to the book’s creator and his widow. But how did you take a 61-page illustrated book and transform it into a feature-length film?

There’s an approach that we developed to looking at adapting Ted’s work during Horton. And that is first and foremost you keep going back to the text and the imagery. You do that throughout the process from the first day that you begin the story process all the way up to the day that the film is locked.

We look at what happened potentially before the book began, what happened theoretically in between the pages of the book, and in this case what happens after he finishes the story.

In doing that, we’re also reading as much as we can about Ted’s own ideas about the book. And fortunately there’s material available in which he was writing about what his intent was with The Lorax. We spent a great deal of time interacting with Audrey and having conversations with her about her perception of his intent.

We also look at how he approached writing and illustrating for children. There were very clear themes as to what he was doing and why he was doing it. We use all of these different sources of input and then discover the expansion.

What have you learned about storytelling from Dr. Seuss?

I can tell you that one of the most inspiring aspects of how he worked was that he used his imagination to engage and delight his readers. But simultaneously he frequently was also conveying ideas of real substance.

That very simple approach is a wonderful approach that potentially is analogous to our approach in making films. We very much want our films to entertain audiences, but we also strive for the films to have thematic values. When an audience is being entertained they’re open to ideas that can reach deeper.

You also have a Dr. Seuss biopic in development with Johnny Depp attached to star. What can you tell us about this project?

Not much because we’re really at the very early stages of developing. It’s a movie that is inspired by Ted’s life and there’s a tremendous responsibility that one takes on when you agree to tackle a project like that.

There’s a responsibility when you take on any of his work because it’s not only about the individual project, it’s also about protecting and building his legacy.

What does it mean to you to be the guardian of his legacy? It seems like that’s what you’ve become, in a certain sense.

I feel like I’ve helped Audrey and her group, but I feel that I am in service of her mission. I feel she is the guardian and I believe that the only way you can help that mission is to be willing to place that goal as an absolute in all facets of decision-making around the film.

That’s what we aspire to, but it doesn’t mean we don’t make mistakes because we do. And it doesn’t mean that people won’t have a different point of view about how successfully or not we have achieved our goal.

Do you have any other Dr. Seuss film projects in the pipeline?

We have not yet announced what my next collaboration with Audrey will be, but we’ll be doing that very soon.

Dr. Seuss’ The Lorax is a Dartmouth Tale