Dartmouth Professor Daniel Rockmore and Computer Science Department PhD students James Hughes and Nicholas Foti have taken an innovative mathematical approach to analyzing literary styles and their evolution over time. Rockmore is the William H. Neukom Professor of Computational Science, director of the Neukom Institute for Computational Science, and chair of the Department of Mathematics. 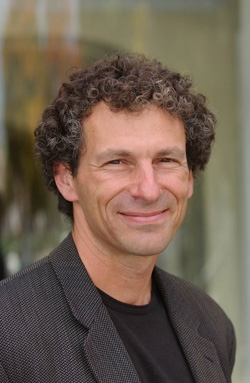 Daniel Rockmore is a professor of mathematics and computer science at Dartmouth College. (photo by Joe Mehling ’69)

The research results appeared in the Proceedings of the National Academy of Sciences with subsequent coverage in New Scientist magazine.  Through their analysis of how writers use “content-free” words such as “to” and “that,” mathematician Rockmore and colleagues were able to conduct what they call the first, large-scale “stylometric” analysis of literature. They drew their study material from the online Project Gutenberg Digital Library.

The researchers state that writers from any given period of time are thought to share similar literary styles, but until now there had been no quantitative evidence for this observation. Using nearly 7,750 works by more than 500 authors from the archive, they focused on the usage of more than 300 words—including prepositions, articles, and conjunctions—and found that authors tended to be stylistically similar to their contemporaries. The authors also found evidence that writers in a given field of literature tend to adopt similar styles.

They contend that stylistic influence is diminishing over time at an increasing rate.  Also, the increased stylistic diversity observed through the 20th century suggests that, as the number of published works increases over time, individual authors are influenced by a diminishing subset of historical works.

The research supports the idea that different periods of time have their own literary styles, and suggests that quantitative analyses can provide fresh insights into the evolution of literature. “This study gives quantitative support to the notion of a literary ‘style of a time’ with a strong trend toward increasingly contemporaneous stylistic influence,” the researchers write.

“This is just one example of the extraordinary opportunities for interdisciplinary work afforded by the digitization of cultural artifacts such as literature, visual art, music, and archaeological finds,” says Rockmore. “I think it’s really just the tip of the iceberg and a nexus for tremendous opportunities for exciting interactions between the arts, humanities, and sciences.”