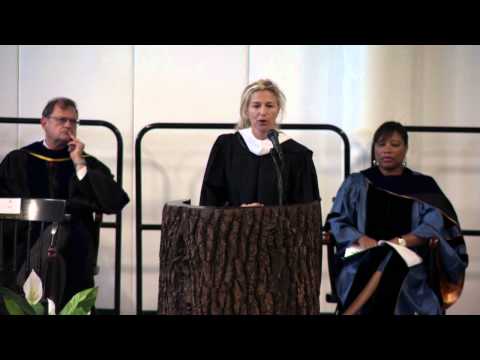 Thank you to Dean Johnson, President Folt, faculty, students, it is truly an honor and a thrill to be speaking to the class of 2016. I couldn’t get Clint Eastwood’s chair today, but I brought my own prop, it’ll be better than his chair, I promise.

I’ll tell you upfront, I don’t have a lot easy answers for you today, because my job as a documentary filmmaker is to ask questions and seek perspective. Whether I’m doing a film about the Darfur genocide, or criminal justice system in North Carolina, or even about the aging female comedian Joan Rivers, I ask questions and define character as a way of creating a lens for telling stories.

And you might think these stories wildly different, but they share a universal theme—of courageous individuals pursuing their dreams against great obstacles. So for the next few minutes, I want you, Class of 2016, to think about your own motives, your own character. What can your unique perspective bring to your experience at Dartmouth, and what story will it leave behind?

You are the first class to experience four years with a new Visual Arts Center and it’s awesome—I just saw it, it’s amazing, you probably haven’t seen it yet, but you will—and a college rededicated to excellence in the arts, as embodied in Dartmouth making this year the Year Of The Arts. So my great hope is that you will incorporate the arts in whatever you study, and use art to tell your story.

What do I mean by art? For me art is universal. Today I listened to the Glee Club—that was art.  It can develop from a musical note digitally reversed in a film score to evoke feeling, or it can seep in from the campus green on a Sunday morning when you’re alone with your thoughts without an agenda.

The disciplines you will learn at Dartmouth will give you ready tools for creating. Think of Leonardo DaVinci and his application of math to the Mona Lisa, or our own beloved Dr. Seuss applying philosophy to his imaginary worlds. You never know when the things you love will come together to create inspired thinking and unexpected outcomes.

Very recently I did a short film about Peter Diamandis, a Harvard trained doctor, who invented the X Prize—a $10 million prize awarded to innovative solutions for the betterment of humanity. So Peter’s latest prize is inspired by his love of Star Trek. He’d like to make a Dr. Spock-like tool and transmit, be able to take information, vitals from a remote village, transmit the information instantaneously to a hospital in the United States for diagnosis.

Peter says, "The day before something is truly a breakthrough, it’s a crazy idea. If it wasn’t a crazy idea, it would be an incremental improvement.”

I think of this because we’re always balancing prescribed learning with creating, and very often pulling back from our crazy ideas because we’re afraid to fail. We didn’t talk about our speeches today and I’m going to talk about failure too—it’s the theme today.

As a documentary filmmaker, I have come to define art as a process that necessarily involves risk and failure—and believe me I’ve failed a lot.  But mine that failure for a kernel of inspiration and then act on it.

On one of the first films, I set out to tell the story of a young boxer on his way to become the next Junior Olympic Champion. I met Joey Rios when he was 12 and he was boxing out of a gym in the basement of a grocery store in the South Bronx. The gym was a creation of Luis Camacho, his charismatic trainer who lived a block away in a row house.

Camacho would step from the city’s burned-out streets into the secret garden he had created behind his house, growing hot peppers in an oasis he built out of garbage cans. Here was a story full of characters, obstacles, life. I turned to two Dartmouth friends to help me tell the story. William Rexer, who is a director of photography today, had a camera and my film director, Annie Sundberg, had a car. That was probably about the sum total of our possessions in those days. And we followed Joey’s story for three years, determined to make a story about the next boxing champ, the real life Rocky.

The problem was that every match we filmed with Joey, he lost, and the year he turned 15, he didn’t win a single competitive fight. Believe me, we tried to take these broken pieces and fit it into this vision we had of greatness. But it really wasn’t until we realized that we had failed to make the film we set out to make, that we realized we had captured a much more universal and deeply emotional one: about the tumultuous time of adolescence—or at least parents can relate to that. By refocusing our lens from our mistakes, we learned a creative truth—there are no correct answers, just new ways of seeing things.

Dartmouth was very different when I was here in the 1980s, but the things that inspired me as a filmmaker are still true for Dartmouth today. It was in this supportive environment, with professors who fostered my work over dinners at their houses, that I had confidence to experiment. It was in this liberal arts environment where I studied literature and psychology, that I learned about the narrative and the human condition. And it was in an unassuming building without state of the art film-school equipment, that I learned to make-do and jerry-rig. I mean here we learn that MacGyvering a solution can actually spark invention.

In one of the earliest films I made, and probably my most life-changing one, came from a phone call from a friend in North Carolina. He told me about an 18 year old man, Darryl Hunt, who had been convicted of raping and murdering a white newspaper reporter. He was convinced that Darryl, a black man, had been wrongly convicted. Something about the phone call compelled me. It maybe was the characters he talked about. Too Tall Wall and Johnny Gray, Marie Crawford, a.k.a. Lil’ Bit, or maybe it was his emphasis on the town’s rush to judgment, or the racially charged news reporting.

But I called my Dartmouth team, Annie and William, and we called our film professor, Michael Hanitchak, who ran sound for us, and we drove to North Carolina. That one phone call led filming for 13 years on and off until 2003 when Darryl was released from prison when the real murderer confessed. Our process paralleled Darryl’s much greater struggle for justice. We lost film, misplaced sound, we fought for financing. And we had no idea that this film would ever get finished, let alone become an HBO award-winning documentary that elevated Darryl’s story to a national platform.

We were young—not much older than you guys—very inexperienced, but I think we persevered because we were just simply inspired to tell Darryl’s story of injustice. And from that experience I learned that sometimes in life, as in art, it is the doing, and the risk-taking, that leads to the unforeseen rewards.

A prolific, writer, director, actor, producer, Mel Brooks once said: “I don’t want to wax philosophic, but if you’re alive you’ve gotta jump around, you’ve gotta to flap your arms and legs, because life is the very opposite of death, and therefore you must at very least think colorfully and noisy, or you’re not alive.”  That was my Mel Books impression—it was really bad.

So trust your colorful thoughts and don’t be afraid to act on them. Our latest film about knuckleball pitchers embodies this thinking.

Knuckleball pitchers—outliers in baseball—throw the pitch off their fingernails with no spin and no clear trajectory.  The balls dance through the air and land unexpectedly. Knuckleball pitcher Tim Wakefield and R.A. Dickey say, “You have to be brave and commit to this pitch because it will either be a strikeout or go wildly afield.”

So if I may use this as a metaphor for your time here at Dartmouth, Class of 2016, there is no straightforward path, no clear trajectory. But I urge you to push forward, not to pull back, especially today when the world is politically fractured and full of unrest. You will be handed broken pieces, but here at Dartmouth you will learn tools for thinking and doing. And ultimately it is up to you what you make of that and what story you leave behind. So I say, wander into the new Visual Arts Center and see what unexpected paths you discover.

Date
9/17/2014
Body
Dartmouth Now takes note when faculty and other members of the community weigh in on issues of the day. Here is today’s “Quoted”:“Asking...
Articles