In a late November game at Boston College, when the Dartmouth men’s hockey team was tied going into the third period against the country’s top-ranked team, you could sense there was something special about this Big Green team. Although they ultimately fell to the Eagles that day, two games later Dartmouth showed they’re a team to be reckoned with when they knocked off No. 2-ranked UNH 4-1 in front of a sellout crowd of more than 4,500 fans at Thompson Arena. 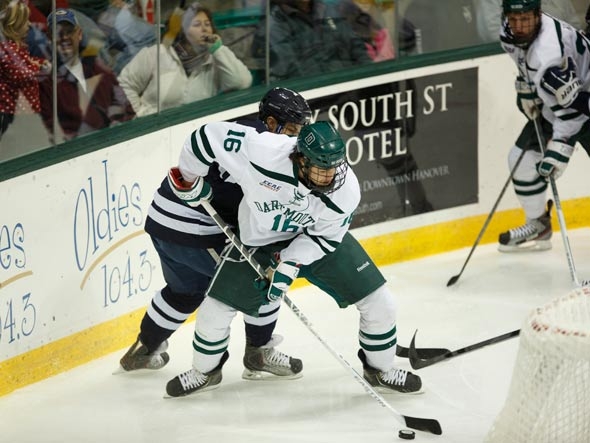 Tyler Sikura ’15 is one of the top undrafted players in college hockey and is being watched carefully by NHL scouts, says Dartmouth Head Coach Bob Gaudet ’81. (Photo by Mark Washburn)

This young Big Green team of 18 underclassmen has been ranked as high as No. 8 in the nation this year. This marks the first time Dartmouth, whose current record is 9-5-2, has attained a top 10 ranking since the inception of national rankings in 1996. Previously, the team’s highest ranking was 12th, and the highest year-end ranking was 15th following the 2004-05 and 2010-11 seasons. Going into this weekend’s games with Brown and Yale (with which Dartmouth is tied for third in the ECAC standings, along with Union), the Big Green is currently ranked No. 11 in the USCHO and USA Today/USA Hockey polls.

One of the keys to the team’s success is Tyler Sikura ’15, who has led Dartmouth in points scored for two seasons. As a freshman, he tied Doug Jones ’12 for the team lead, netting 25 points in 33 games (11 goals and 14 assists). So far this year, the Big Green’s first line center has scored 22 points in 16 games.

“He was an outstanding player for us as a freshman, and this year he’s picked up where he left off,” says Head Coach Bob Gaudet ’81. “Tyler’s an incredibly hard worker, so the influence he has on the team is a big one. He’s developed so much through his hard work. In the spring of last year, he trained hard with our strength coach, Bob Miller (the Holekamp Family Strength and Conditioning Coach). So he’s a bigger, stronger version of himself from last year, and that’s allowed him to be even more of a dominant player.” 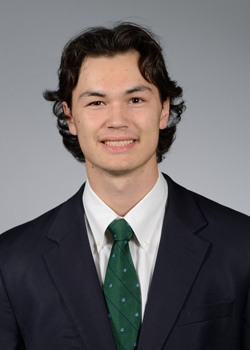 Gaudet describes Sikura as a “really good combination player with great on-ice vision,” and says he’s one of the top free agents in college hockey who will be watched carefully by NHL scouts. But in addition to Sikura’s skills as a player, Gaudet cites his impact as a teammate and role model. “He’s the first guy on the ice and the last to leave, and he has that same mentality in the classroom,” says Gaudet, who is in his 16th season as head coach. “Each practice, each workout, each game, he’s going to give you everything he has.”

Sikura grew up in Aurora, Ontario, where his family owns a thoroughbred breeding farm. His family is originally from Czechoslovakia, but his grandfather fled the country in the late 1940s and eventually settled in Canada. When asked how long he’s been playing hockey, Sikura replies with a laugh, “I’m a Canadian! So I started skating when I was 2 and playing hockey when I was about 4.” 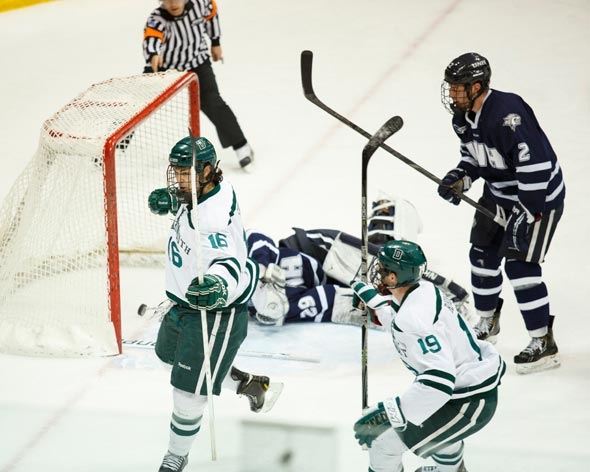 Sikura celebrates after scoring a goal in Dartmouth’s 4-1 victory over No. 2-ranked UNH on December 30. (Photo by Mark Washburn)

Growing up, Sikura had hoped to attend an Ivy League school. He was impressed by Dartmouth’s coaches, and fell in love with the campus when he visited. (His brother Dylan has verbally committed to the Big Green hockey program, and plans to join the Class of 2018.)

“You meet people here who are so brilliant in so many different ways,” Sikura says. "Everyone here is worth knowing. And I’ve been taking advantage of office hours with professors, and invited a couple of professors to come see games. It’s cool for them to see what you do outside the classroom and to get to know them outside the classroom as well. You can build a relationship with your professors here, and I don’t think that’s something you get at a lot of other schools.”

A sociology major, he credits the team’s success to hard work and great camaraderie. “We’re really tight, we have a lot of team chemistry, and we’re always looking to do some extra work,” Sikura says. “But consistency is going to be the key for us in the second half of the season. Finding that consistency and knowing that any team in this league can beat you if you’re not on your game.”

His ultimate goal is to play in the NHL, but for now Sikura and his teammates are focused on qualifying for the NCAA Championship, something the Big Green hasn’t accomplished since 1981. “We want to make the [NCAA] tournament, that’s our goal,” Sikura says. “Everyone thinks we’re capable of it, and we’ve played two games that proved we’re capable of it. And once we get there, the ultimate goal is to win a national championship.”