Eleven Dartmouth undergraduates spent the 2013 winter term making a documentary about Ben Kilham, a Lyme, N.H., resident who has received national media attention for his unconventional scientific research about black bears. Their 30-minute film, Out of the Den: A Winter with Ben Kilham, premieres at 7 p.m. on March 8 in Loew Auditorium at the Black Family Visual Arts Center. 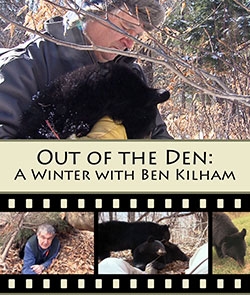 (Courtesy of the Department of Film and Media Studies)

The students in “Film Studies 10: Intro to Professional Videomaking” all have varying degrees of filmmaking experience, and have been guided through the process by Professor Jeffrey Ruoff, chair of the film and media studies department, audio/visual specialist Peter Ciardelli, and student assistant Nina Rojas.

“This is the first time that I’ve taught a class where we’ve just made one film. Everyone worked together on one project and we tried to make a professional-quality film,” says Ruoff.

Kilham approached Ruoff about the possibility of working on a documentary with film students, who would have access to the hundreds of hours of archival footage that Kilham had collected. Ruoff thought it was a great idea, as did his class. “Ben and his bears are wonderful subjects and the film will appeal to people of all ages,” says Ruoff, noting that by showcasing a local personality, students were able to explore the Upper Valley and connect with area residents.

Kilham, the author of Among the Bears: Raising Orphaned Cubs in the Wild, has received national coverage from media outlets such as The Huffington Post and the National Geographic Channel, which reported on the 20 years he has spent raising orphaned black bear cubs and studying their behavior. He has been the subject of a previous documentary, Papa Bear, which was made in 2004 and focused on his work with the bears.

The Dartmouth student filmmakers, however, chose to uncover more about Kilham’s personal life through interviews with Kilham, his associates, his wife, and his sister. Audiences will learn about his theories on bear observation, his gunsmith business, his father’s influence, and his battle with dyslexia.

“We treat the audience to some cool visuals of bears, but the documentary is really about Kilham and how he’s overcome his struggles, and his life philosophy,” says sound editor Ben Feeser ’13 of Richmond, Va.

Kilham, who has lived in Lyme since 1961 and had his home “invaded” by film crews before, says he found the Dartmouth students to be “very professional and dedicated to what they were doing. I know they spent a lot of time outside the classroom working on this project. And from what I’ve seen from the final cuts they did a nice job of telling my story, how I do this work, and how I do it differently.”

Kilham says he is pleased with the focus Ruoff’s class chose. “This film covered the dyslexia aspect of my life, and I think that’s important because there are a lot of people who are affected by dyslexia,” says Kilham. “It’s important to see that you can succeed despite this difficulty.”

Seeking to have his bear research accepted by the scientific community, Kilham is currently working on a PhD at Drexel University. This winter, Kilham and his family also have their hands full with 27 bear cub orphans.

“He’s such an interesting character because he’s out to prove something after being written off by the mainstream scientific community,” Feeser continues. “Kilham struggled through school his entire life because of his dyslexia, but was thought of, in his own words, as either lazy or dumb. Even though he eventually attained a college degree, the scientific community has yet to accept his work on black bears because he has not yet acquired his PhD or published in any academic journals.” 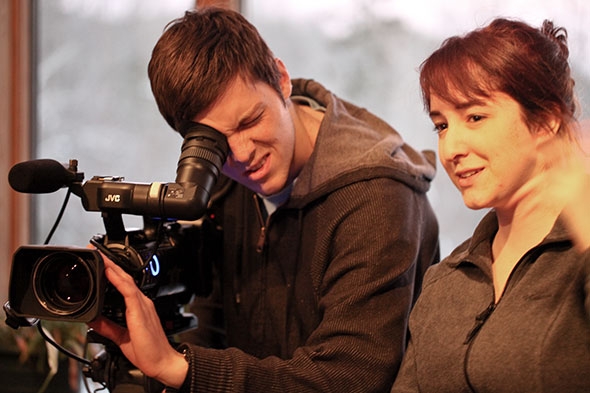 Ruoff’s students say that one of the most enjoyable aspects of the project has been seeing all of their hard work turn into a visually compelling story they can share with audiences. “And getting the opportunity to work with someone who has so much passion pursuing their life dream was very enjoyable and inspiring,” director Sapon-White adds.

The March 8 screening is free and open to the public. A discussion with Kilham and the student filmmakers will follow the film.

(The film’s publicist, Jonele Conceicao ’14, contributed to this story.)