Neuroscientist Says Humans Are Wired for Free Will

Dartmouth’s Peter Tse ’84, an associate professor of psychological and brain sciences, says he has identified a neurological basis for free will in the human brain, challenging a majority opinion that has dominated neuroscience for the last 40 years. 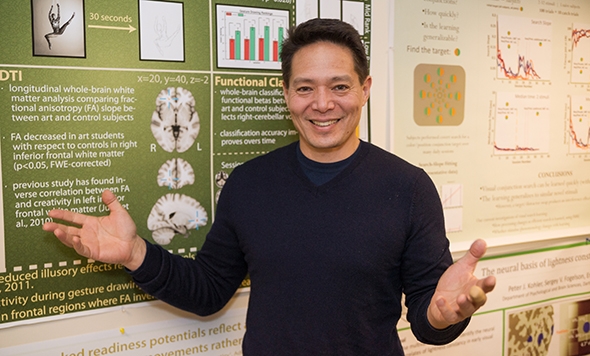 Professor Peter Ulric Tse ’84 argues in his new book that free will is real and can be pinpointed in the microscopic workings of human brain cells. (Photo by Eli Burakian)

Measurements of human brain signals on the level of neurons and synapses have long shown that acts of will are preceded by a buildup of neural activity in the brain. These signals can begin up to seconds before a person is consciously aware of the exercise of volition, according to the weight of data, Tse explains.

Until now, neuroscientists have argued that because this buildup of signals comes before a person acts, or is even conscious of having decided to act, free will cannot exist, because it would require that a thought causes itself to exist before it exists.

“How can something cause its own physical basis? It is this ‘you can’t pick yourself up by your own bootstraps’ idea that has been the main argument against the possibility of free will,” Tse says.

The way around this problem, Tse says in his new book, The Neural Basis of Free Will: Criterial Causation, is to understand that information is realized not only in neural firings in the present. Information is also realized in the strengths or weights of connections between neurons, called “synapses.” Neurons can change the weights of other neurons’ synapses very quickly. These “rewired” neurons will now fire differently upon future inputs than they otherwise would have.

Tse gives the example of sending a train from New York City to San Diego. Since America is covered by a vast mesh of train tracks, a train will reach San Diego only if it is always on a track that brings it closer to San Diego. This requires resetting train track switches so that the train goes onto the correct track. These switches have to be changed before the train passes over a track junction.

Tse argues that the brain is like the totality of America’s tracks, rapid synaptic reweighting functions like flipping train track switches, and bursts of neural firings that he calls “burst packets” function like the train in this analogy.

Take, for example, the process of buying a new car, he says. It begins by setting criteria: The car should get good mileage, have a good reputation, the price will be within a certain range, and the car must be red. Then, when a vehicle comes along that fits the bill, the choice is made.

”That choice does not need to be made consciously. What’s made consciously is the setting of the criteria for making a future choice—coming to the conclusion, OK, I want this kind of car, and when it comes along, poof, you say, ‘Oh, that’s the car I wanted,’“ Tse says.

How does this relate to the question of whether we have free will? Traditionally, people have said that either everything is determined before it happens, and you have no choice, says Tse, or everything is simply a matter of chance, which also excludes the possibility of choice.

”This is the bogeyman of the free will argument,“ Tse says. ”How can we have a middle ground between the two extremes of determinism, where you have no free choice in the sense that things could not have turned out otherwise, and indeterminism or chance, where you didn’t actually decide the outcome?

“The solution is that the brain can set criteria for future mental activity that will be met by future inputs.” This can follow a long period of consideration, or playing things out virtually in one’s mind, before an optimal set of criteria gets wired into synaptic weights so that the system is ready, should the right car comes along.

A Loss of Will

Many of the current theorists who reject the idea of the existence of free will, including Michael Gazzaniga ’61, a former dean of the Faculty of Arts and Sciences at Dartmouth and the author of Who’s In Charge? Free Will and the Science of the Brain, and Sam Harris, author of Free Will, build on the 1970s research of physiologist Benjamin Libet. Using electroencephalography, or EEG research, Libet documented the phenomenon of brain impulses preceding an act of volition.

In his research, Tse used EEG experiments to look at Libet’s work. Tse suggests that Libet’s results are not a strong argument against free will.

“The capacity to freely choose something may not be driven by your conscious feeling of being the cause of something. Much more important is the ability to entertain options and play them out internally,” Tse says.

To find an ally in his campaign to restore a theory affirming human free will, Tse reaches back more than a century. He finds the philosophical roots of his argument in the work of American philosopher and early psychologist William James, who applied Charles Darwin’s theory of evolution to the realm of human thought.

James theorized that, as with natural selection among animals, there are two stages of free will. One generates many possibilities, partly randomly. The other selects the good ones—or deselects the bad ones—by some sort of will, Tse says. But James did not have the tools of neuroscience that Tse has at his disposal.

“I am trying to understand what physical mechanism could explain James’ insight,” Tse says.

“Just as Watson and Crick showed that there is a physical basis, a physical mechanism—namely DNA—that could account for evolution,” Tse says, “I am arguing that rapid synaptic reweighting is the physical mechanism that gives humans the power to exercise free will.”