The University of North Carolina at Chapel Hill on April 12, 2013, elected Dartmouth’s Interim President Carol L. Folt to be its next chancellor. Folt will assume her new role on July 1, succeeding Holden Thorp, who is leaving to become provost of Washington University in St. Louis. Folt will be the first woman to lead UNC-Chapel Hill. 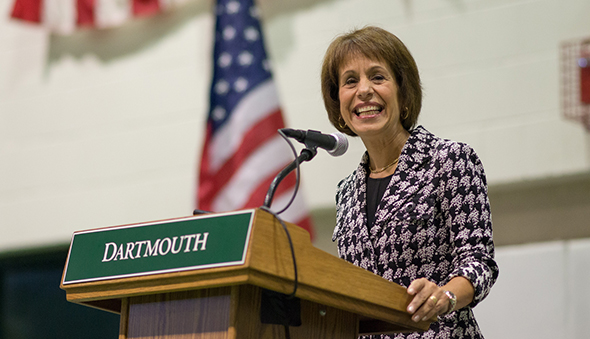 As the 11th chancellor of UNC-Chapel Hill, she will serve as the administrative and executive head of America’s oldest public university. Chartered in 1789, the university ranks among the world’s top academic institutions, with almost 30,000 undergraduate and graduate students and more than 3,000 full-time faculty.

“Carol has an impressive record of academic leadership and innovative scientific research, and I’m thrilled that she has been presented with such a terrific opportunity to lead one of the country’s premier universities,” Dartmouth Board of Trustees Chair Steve Mandel ’78 said. “All of the trustees are grateful to Carol for her excellent leadership over the past year and for her unyielding dedication and commitment to Dartmouth. We congratulate Carol on this thoroughly deserved recognition and wish her every success in her new role.”

Folt became interim president of Dartmouth—the first woman to hold the office—on July 1, 2012, following the departure of President Jim Yong Kim to head the World Bank. She had been serving as provost, a position to which she was appointed in 2010. She has also served as dean of faculty, dean of Graduate Studies, and a leader of several major cross-school initiatives during a distinguished 30-year career at Dartmouth. The institution will soon launch a national search for a new provost.

“Dartmouth has been a wonderful intellectual and personal home to my family and me, and I am deeply privileged to have been part of a community so dedicated to the pursuit of knowledge and innovation,” Folt said. “I would like to thank the entire Dartmouth extended family for your gifts of passion, purpose, and warmth, which have enriched my life and that of my family in so many ways. It’s been an incredible ride and the best possible preparation for the exciting challenge of leading a major research university like UNC-Chapel Hill.” 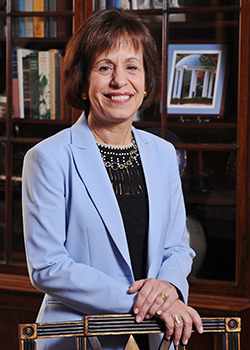 Hanlon congratulated Folt on her election and said, “Carol has dedicated herself to creating an intellectual environment at Dartmouth where groundbreaking research and life-changing learning take place together. She is a leader in higher education and her appointment is well deserved. Carol will always have a special place in Dartmouth’s history.”

Michael Mastanduno, dean of the Faculty of Arts & Sciences, commented, “Whether as a faculty member or administrative leader, Carol has been a devoted teacher and mentor of students, always driven by an unflagging commitment to Dartmouth’s dual mission of education and research. No matter the demands on her time, she has continued to produce important research in environmental science, inspiring budding scientists who found themselves at home in her lab. All of these qualities make her an outstanding choice for chancellor of UNC-Chapel Hill.”

During the past two years, Folt has been driving Dartmouth’s first institution-wide, faculty-led academic strategic planning process. The process has enhanced collaboration and shared mission and provided vital insights into Dartmouth’s assets and opportunities.

Denise L. Anthony, professor of sociology and chair of the Faculty Strategic Planning Advisory Committee, said, “Carol is an excellent listener and team builder, and in leading the strategic planning process she motivated the Dartmouth community to look outward and aim higher as we consider the institution’s future. Thanks to this effort, we now have a set of ideas that will no doubt help shape Dartmouth long into the future.”

Folt also championed Dartmouth’s first Year of the Arts, which has brought a slate of special artistic programs and initiatives to campus this year to shine a spotlight on Dartmouth’s vibrant arts culture and reaffirm the institution’s role as one of the nation’s leading academic arts communities.

Folt is the Dartmouth Professor of Biological Sciences, an endowed chair she has held since 2007. She is a distinguished environmental scientist, known for groundbreaking interdisciplinary research on metal toxicity in aquatic ecosystems and effects on human health and on salmon restoration. Awarded Dartmouth’s Huntington Award for Teaching in 1991, Folt is a highly regarded teacher, adviser, and mentor. In 2010, she was elected a fellow of the American Association for the Advancement of Science (AAAS) in recognition of her scientific contributions and her leadership in higher education.

In addition to her teaching responsibilities, she has served as a senior academic leader at Dartmouth since 2001. As provost, Folt worked closely with President Kim to develop and implement a strategic and financial vision for the institution and, with the chief financial officer, co-led Dartmouth’s successful effort to resolve a $100 million budget gap during the recent financial crisis. As dean of faculty, Folt oversaw an unprecedented period of faculty expansion in Arts & Sciences, including increased levels of women and underrepresented minorities in leadership positions. She launched new academic programs, enhanced the competitiveness of Dartmouth’s graduate programs, and strengthened support for critical student services.