A delegation from Beijing Normal University (BNU), led by its president, Qi Dong, spent two days at Dartmouth recently to meet with faculty, students, and administrators. Dartmouth’s relationship with BNU began in 1983 and currently includes Foreign Study and Language Study Abroad programs, and a faculty exchange. 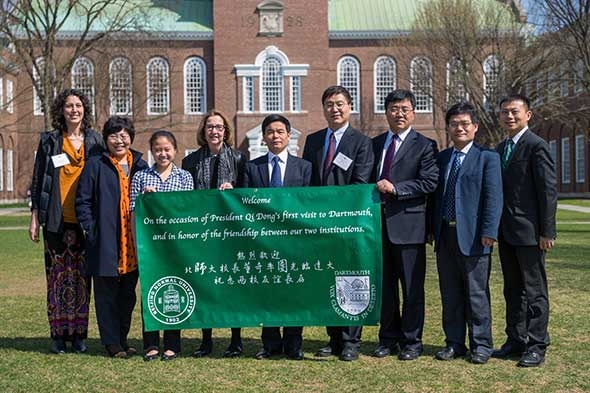 The Beijing Normal University delegation met with members of the Dartmouth community and gathered in front of Baker-Berry Library with a commemorative banner. From left are Kerry Laufer, project manager in the Office of the Provost; Professor Li Chen of BNU; Deborah Yeoh-Wang ’14; Assistant Provost for International Initiatives Laurel Stavis; BNU President Qi Dong; Professor Hongqi Chu of BNU; Guomin Zheng of BNU; Tao Xin of BNU; and Kai Xiao of BNU. (Photo by Eli Burakian ’00)

In a celebration of the two institutions’ 30-year relationship last year, Interim President Carol Folt extended an invitation to President Dong to visit Dartmouth, and the time spent in Hanover by the delegation signaled continued commitment to the relationship, and a desire to expand and enhance collaborative activities.

“Beijing Normal University is one of the finest institutions of higher learning in China,” says Laurel Stavis, assistant provost for international initiatives, “and President Dong is an eminent brain scientist. He is leading his university in bold new directions, and we are delighted that he is interested in seeking input from Dartmouth in this process.”

BNU is creating a new academic center in China based on the liberal arts model.

During its visit to Dartmouth, the BNU delegation held meetings that focused on the structure of liberal arts education, attended a working lunch for faculty in psychological and brain sciences, discussed new models of student exchange, and attended a symposium on music and cognitive neuroscience.

The visit ended with a banquet in the Black Family Visual Arts Center hosted by Lindsay Whaley, interim vice provost, associate provost for international initiatives, and professor of linguistics. “We hope that the ideas shared today will form the basis of an expanded collaboration between Dartmouth and Beijing Normal University,” says Whaley, “a relationship grounded in the strengths of our great institutions, and the commitment of our deep bonds of friendship.

During a meeting to discuss the philosophy and structure of Dartmouth’s liberal arts education, Lynn Higgins, associate dean of the faculty for international and interdisciplinary programs and the Edward Tuck Professor of French and Comparative Literature, says Dartmouth’s curricular requirements strive to give students a “breadth and depth of knowledge.”

Associate Professor of Classics Håkan Tell says, “There is a cross-fertilization along the different courses that students take that is at the core of what we do,” explaining that a student who is studying ancient Greek combines language acquisition with computer programming. “They create associations along the different fields in ways that only a liberal arts education prepares them for.”

The BNU group also toured the Dartmouth campus, stopping in Baker-Berry Library to see the East Asian collections with Librarian for East Asian Studies Nien Lin Xie. They also spent time at the Chinese Language House living and learning residence and cultural center and met with Fang Min Wu, resident director of the house and a visiting professor of Chinese from BNU.

James Dorsey, chair of the Department of Asian and Middle Eastern Languages and Literatures and associate professor of Japanese, says the BNU meetings presented “the enormous range of possibilities that exist. For three decades, Beijing Normal University has been a valued partner. It is exciting to see it move in new directions, and to have the chance to be a part of that evolution.”

During one meeting attended by Dean of the Faculty of Arts & Sciences and Nelson A. Rockefeller Professor of Government Michael Mastanduno, BNU President Dong described a scenario in which Dartmouth undergraduates could take classes in English at BNU, such as economics and government, and BNU students could study at Dartmouth in various departments.

“From an undergraduate perspective we have more than 30 years of collaboration,” Dong says. “But I think we have more space to explore for the future. That is why we came here. We want to create opportunity for your students and for our students.”