Dartmouth placed first in the “electric drive class”, which took place April 30 to May 2 at the New Hampshire Motor Speedway in Loudon, N.H. Race cars were evaluated on their design, acceleration, presentation, and on their endurance and autocross runs. 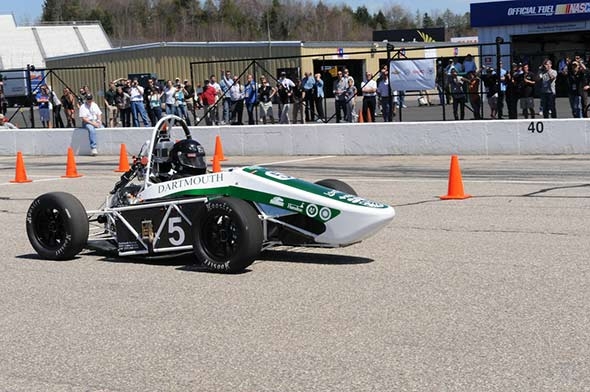 “We set out to win the event and had no idea the challenges we were up against,” says Darren Reis ’13, a Thayer School of Engineering student who drove in the competition. “This year was a great result for us.”

Finishing with 860.89 points, Dartmouth had nearly twice the score of the second place finisher, the University of Vermont, in the electric car category. Twenty institutions registered for the competition, which has electric car and hybrid car divisions. Only 11 colleges and universities brought race cars to the seventh annual event, though, which speaks to the difficult nature of constructing such a car. This was the first time Dartmouth competed with an all-electric car. 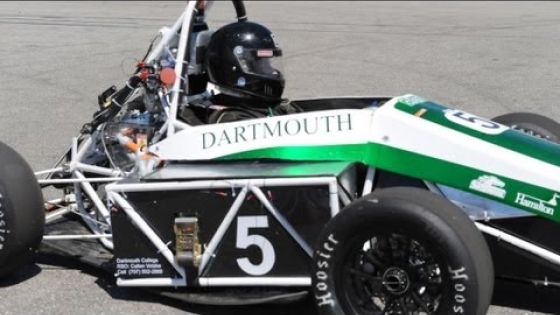 Dartmouth’s car, nicknamed “Paula,” weighed in at 832 pounds. In the acceleration run, Paula covered 75 meters in 6.181 seconds with Thayer graduate student Christen Bilger ’11 behind the wheel.

“I had the time of my life,” says Bilger. “It was extremely rewarding to summarize all the hard work our team had put into the car and do so incredibly in the competition.”

Though it is designed for acceleration more than top speed, Paula can reach up to 60 miles per hour.

In the 22-kilometer endurance run, which tests a car’s efficiency, the Dartmouth car had to stop briefly because of battery overheating. But the team recovered and finished with 56 percent of its energy remaining. The team was also awarded best design in the electric car category.

The competition, hosted by Thayer School, started in 2006. Earlier in the week, New Hampshire Gov. Maggie Hassan visited the event, touring garages and chatting with participants.

David Jensen ’13, Jose Ordonez ’13, and Reis started work on the car last fall as a senior capstone project. Others joined the project in March.

Reis says he hopes future DFR teams can learn from the car they built. In the short term, though, Reis has less lofty plans.

“Now that the competition is over, the real fun starts,” says Reis. “We want to go out and play with the car. Some of the team hasn’t even gotten to drive it yet.”

Reis is excited about his team members getting to hit the gas pedal.

“Driving the car was a special experience,” says Reis. “It was amazing to have the opportunity to compete in a vehicle we ourselves built.”