Forty Years On: The Changing Face of Dartmouth

Dartmouth is a very different place today from the institution of the late 1960s. It was an all-male college with a handful of black, other minority, and economically disadvantaged students, and had little focus on Native American education.

Today, women make up half the undergraduate population at Dartmouth, and half the students classify themselves as a race or ethnicity other than white, with 8 percent of the population African American, 7 percent Hispanic, 4 percent Native American, and 16 percent Asian American. 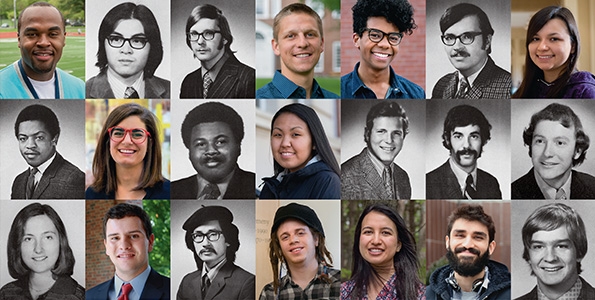 “Stand in the middle of the Green today and the landscape looks the same. But look at the students walking across the Green and it is completely different,” says David Spalding ’76, a student during those years of transformation who returned in 2005 to work for Dartmouth’s administration.

The seeds of change go a long way back. In the late 1940s, Dartmouth leaders were already studying ways to open the opportunities of Dartmouth to anyone who could meet the challenge to excel. Making that ideal a reality was a complex and difficult mission that reached far beyond Dartmouth, involving issues such as secondary educational opportunities for minority and economically disadvantaged students, social barriers for women, and recognition of the importance of minority cultures.

When John G. Kemeny succeeded John Sloan Dickey as president in 1970, the College and the nation were roiling with the issues of civil rights, desegregation, women’s liberation, a building movement for the rights of indigenous peoples, and protests against the war in Vietnam.

Under Kemeny’s leadership, the College graduated its first coeducational class, achieved a rapid increase in racial and economic diversity in the student body, took a leadership role in improving opportunities for black students and poor students in colleges and universities nationwide. He also re-established the College’s commitment to Native American education that was part of the charter of 1769.

By all accounts, Kemeny’s guidance and openness smoothed the way, but the profound changes of that period were the work of many. Here are several of their stories:

When Ellis Rowe ’74, current president of the Black Alumni of Dartmouth Association (BADA), arrived at Dartmouth in the fall of 1970, the minority recruitment effort that started with Dickey in the late 1950s had brought results.  Prior to 1967, one or two black students matriculated each year. By the fall of 1969, 90 black students matriculated at Dartmouth and enrollment stayed roughly at that level throughout the ’70s, according to statistics gathered by BADA.

“Suddenly on our campus there were 200 black students, there were seven or eight professors and people in the administration, and not just people, but their families, living in Hanover, so we suddenly had almost a feel of a historically black college inside an Ivy League college,” Rowe says. Though there was much work left to do, there was a sense of great progress in a few years, he said.

Rowe knew Dartmouth before 1970. Through a national organization called A Better Chance, or ABC, Rowe and thousands of other underprivileged youth, including Dartmouth Rhodes Scholars Willie Bogan ’71 and Jesse Spikes ’72, studied at top high schools and were tutored by volunteer college students. Some, Rowe among them, visited Dartmouth and were tutored by Dartmouth students.

ABC, which is still mentoring students today, began in 1963 when a gathering of prep school headmasters, including former Tucker Foundation Dean Charles “Doc” Dey ’52, then headmaster at Choate, joined forces with Dartmouth for a special residency program for high school students. Hanover High School was one of the first public ABC schools, and Thomas Mikula, also of the Tucker Foundation, was an early organizer of the national program. ABC became a major resource as minority recruitment grew at American colleges. 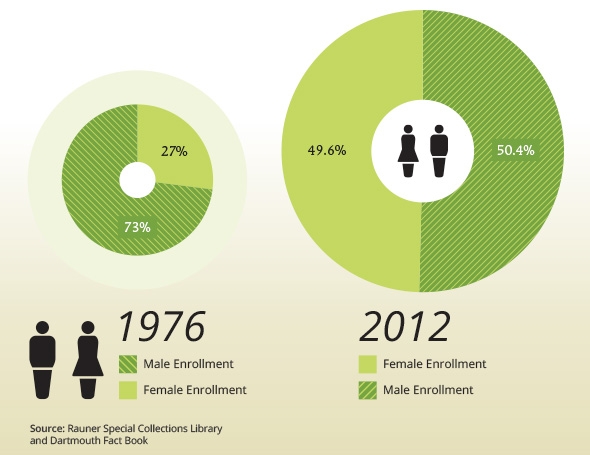 In 1976, the student body was 73 percent male and 27 percent female. In 2012, the population was essentially evenly divided between men and women.

Dartmouth was not a comfortable place for David Bonga ’74, one of 15 Native American students recruited to join the Class of 1974, even though Kemeny’s 1970 inaugural address had called for a revival of Native American education at Dartmouth. The challenge, Kemeny said, was to enable all Dartmouth students, regardless of background or financial situation, to feel that they were full members of the Dartmouth community.

Bonga says that was a struggle. “I felt the campus atmosphere throughout my freshman year depicted an aloofness of the student body toward most issues of interest to Native students.” When he and others petitioned to abolish the Indian symbol as the Dartmouth athletics’ mascot, the atmosphere turned hostile, he says.

Bonga and the other Native American activists found Kemeny’s door open. They called for the creation of a Native American Studies Program (NAS) and elimination of the Indian symbol. The next year, 1972, the Faculty of Arts & Sciences voted to establish the NAS program. In 1974, the Trustees declared the Indian mascot “inconsistent” with the mission of Dartmouth.

“That meeting with President Kemeny, when all of the Native freshman students and four upperclassmen came together to present our suggestions so that the Dartmouth Native Program could become a useful and viable education opportunity for Native students, was my proudest moment on campus,” says Bonga. A few years later, he became the first Native alumnus to serve as director of the Native American Program, which offers support services to Native students at Dartmouth.

Ralph Manuel ’58 was in charge of minority recruitment for admissions in the 1960s, traveling throughout the deep South at the height of the civil rights movement. He quietly and effectively dealt with resistance from those alumni and faculty who saw many of his recruits as unqualified.

Opponents of the recruitment program said applicants without a foreign language or advanced math skills should not be considered for Dartmouth admission, Manuel says, but he looked for the students at the top of their class, regardless of the quality of the school. If they had worked to be the best, they would continue to strive at Dartmouth.

“The point was, if a school didn’t offer a foreign language, how was he to take it? What I looked at was, is the kid a boot-strapper?” Manuel says.

After a hiatus for graduate work in psychology, Manuel returned to Dartmouth in 1971 to find the question of coeducation under intense discussion by the administration and the faculty. Kemeny had made clear in 1970 that coeducation would come; the question was how it would arrive. 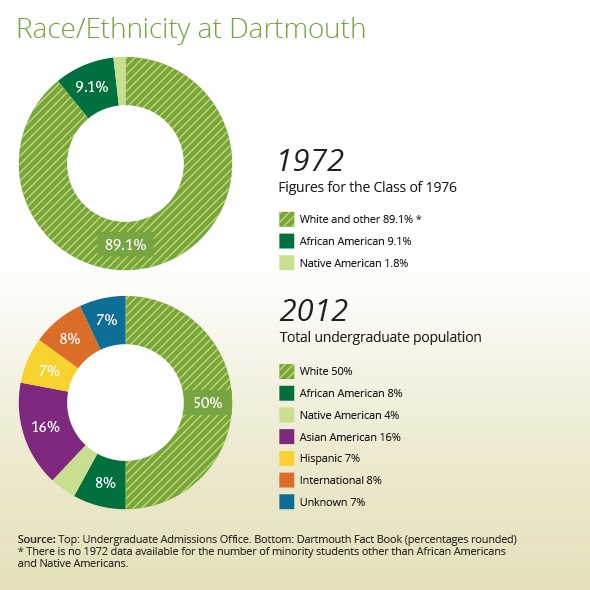 The charts above compare the race and ethnicity figures for the Dartmouth Class of 1976, to that of the total undergraduate population in 2012.

“When I speak of this great diversity of students, I must pause for one moment to note a peculiarity,” Kemeny said in his inaugural address on March 1, 1970. “Dartmouth College, which has such a superb record in the admission of all minorities, does not today consider for admission a majority of high school seniors. ... If we were refounding Dartmouth College today, we would, of course, not discriminate on the basis of race or religion. But I believe that if we were refounding the institution today, we would also not discriminate on the basis of sex.”

When Manuel was considering returning to Hanover to take a job in the Office of the Dean of the College, he was asked flatly if he knew Dartmouth was going coed. Manuel answered flatly that he wouldn’t be applying if it were not. Kemeny was preparing the community for change, and Manuel was one of the foot soldiers in the coming upheaval.

Marysa Navarro, one of a handful of women in the faculty ranks in 1970, was another agent of change at Dartmouth. When the Faculty of Arts & Sciences voted on coeducation in October 1971, a contentious question was how to bring women to Dartmouth without affecting the number of men matriculating. The vote was linked to going to year-round operation—the Dartmouth Plan—but there were few details about how to integrate women.

“In fact, we almost did something that would have been dismal for the institution. We almost built a college across the river in order to have the women there. I was the one who presented the motion on the floor against that, and my motion was to bring in the women to the College, and it passed,” Navarro says.

The Trustees passed the faculty-approved changes in November, but this was only the first step. The debate turned to ratios and quotas and the Trustees did not open that discussion until 1976. In the early years, the College scrambled to work out day-to-day details of housing and equal access to facilities (which was also required under the 1972 federal legislation known as Title IX).

Manuel was again a quiet figure at the center of change. Before the faculty vote, he surveyed the residents of the Mass Row block of dorms for their thoughts on coeducation.

“All of them said they were for coeducation, 100 percent,” Manuel said. “The next fall, that was the dormitory that we were converting to a women’s dormitory, whereupon all the banners came out: ‘Coeds go home.’ ‘No coeds.’ I went over and said, ‘Hey guys, you can’t have it both ways.’ They said, ‘Well, when you asked if we wanted women here the answer was yes, but we didn’t want them in our dorm.’” 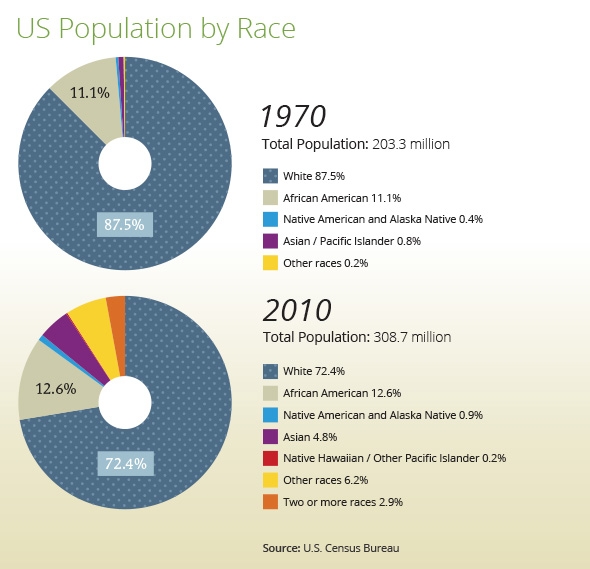 Valerie J. Armento arrived at Dartmouth in September 1971 as an exchange student from the University of California, San Diego, and fell in love with the College. Women had been coming to campus through exchanges in the years leading up to coeducation, but they could not graduate with a Dartmouth degree. When Dartmouth went coed, Armento immediately applied and had the distinction of becoming a member of the Class of 1973.

“We recognized upfront there would be growing pains for the institution as it adapted. One had to have a certain role-with-the-punches attitude,” she said.

Despite difficulties, Armento felt welcome at Dartmouth. “Many of the males in my class and the other classes were pleased about the admittance of women and developed solid, healthy male-female relationships, which continue to this day,” she says.