The U.S. Supreme Court decision to send a closely watched case challenging consideration of race in undergraduate college admissions back to a lower court for reconsideration keeps current policy in place for now, but leaves the issue open to challenges. 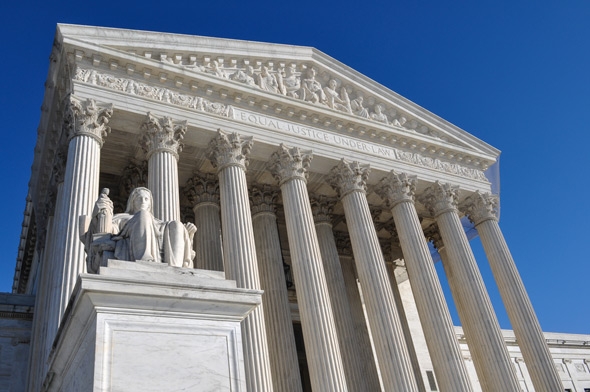 The Supreme Court’s 7-1 decision sends the case, Fisher v. University of Texas, back to the Fifth Circuit Court of Appeals. (Photo by Shutterstock)

Colleges and universities have been following this case, eager to see if the court “would throw a wrench into affirmative action everywhere, but what they did was put it off for another day,” says Sonu Bedi, an associate professor of government at Dartmouth.

While the decision acknowledges diversity as a “compelling interest,” it leaves open the question of how race can be considered as a factor in admissions, says Bedi. In ordering the Fifth Circuit Court of Appeals to apply “strict scrutiny” to race-conscious policy, the Justices are urging the lower court to judge whether the University of Texas system satisfies the requirement of “narrow tailoring” in the means chosen to achieve a diverse student body.

The case was brought by Abigail Fisher, who claims she was denied admission to the University of Texas at Austin because she is white. UT Austin said Monday’s decision will not change admission policy at the state university.

“We’re encouraged by the Supreme Court’s ruling in this case,“ says UT Austin President Bill Powers. “We remain committed to assembling a student body at the University of Texas at Austin that provides the educational benefits of diversity on campus while respecting the rights of all students and acting within the constitutional framework established by the court.”

“As one of our core values, Dartmouth embraces diversity with the knowledge that it significantly enhances the quality of the education we provide our students,“ Hanlon says. ”Our commitment to expanding access and opportunities for talented and promising prospective students from diverse backgrounds, within the confines of the law, is unwavering.“

The 7-1 decision to send the case back to Fifth Circuit Court of Appeals opens a number of paths for the case, but they will all likely end up back at the U.S. Supreme Court, says Bedi, whose soon-to-be published book, Beyond Race, Sex, and Sexual Orientation: Legal Equality without Identity, examines the issue.

The lower court could find that the University of Texas policy does not stand up to strict scrutiny and strike it down, or they could find that it does meet that standard and again uphold the policy. In either case, the losing side would almost certainly appeal to the Supreme Court, Bedi says.

Then, if the high court agrees to consider the case again, ”the Justices would have to decide the case on the merits," he says.