The Remarkable Life and Uncommon Courage of Barry Corbet ’58

Read the full story by Broughton Coburn, published in the July/August 2013 issue of Dartmouth Alumni Magazine. 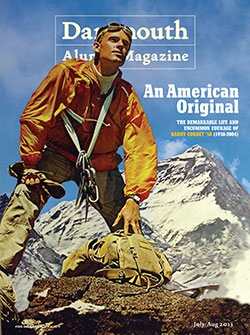 “Until I became a paraplegic, I never had a sense of who I was and what I was doing. The injury forced me to face up to everything,” Barry Corbet ’58 once said. (Image courtesy of Dartmouth Alumni Magazine)

In the summer of 1955 two young climbers from the Pacific Northwest rested at an alpine oasis below the Grand Teton in Wyoming. Barry Corbet ’58 and Jake Breitenbach ’57 were in the prime of youth, able to jog uphill while wearing loaded packs. Corbet was solid and angular, yet gentle and graceful. Breitenbach was all sinewy muscle, topped with a mischievous shock of Dennis the Menace blond hair.

A few days earlier they had navigated Corbet’s battered 1948 Hudson to the Tetons from Dartmouth. During an industrious week they climbed six of the Tetons’ highest and most difficult peaks. Initially they followed piton chips in the rock left by a handsome young student named Jack Durrance ’39, who founded the Dartmouth Mountaineering Club in 1936. Then they broke out on their own and established several new routes in the range.

The Tetons soon became the Dartmouth climbing clan’s untamed, vertical playpen—a proving ground for the skills honed on the primordial rocks of New England. During the summers of the 1950s, Jackson Hole hosted one of the greatest concentrations of Dartmouth students outside of New Hampshire.

Corbet was their ad hoc leader. An astute geology student, he reputedly had the highest IQ at that time of any incoming Dartmouth freshman. “Barry could do whatever he put his mind to,” says his roommate Frank Sands ’58. “He looked at Webster Hall and decided that the three-inch-deep decorative ledge would have to be traversed. The ledge slopes downward, you know, and to remain on it he had to grip the outer edge with his toes. He made it all the way around the building.”