Legendary filmmaker Werner Herzog returns to Dartmouth this week for a five-day Montgomery Fellow residency. The producer, writer, and director of more than 60 films, including feature films Fitzcarraldo, Nosferatu, and Rescue Dawn, and documentaries such as Cave of Forgotten Dreams and Encounters at the End of the World, previously visited Dartmouth in 1986 to accept a Dartmouth Film Society Award. 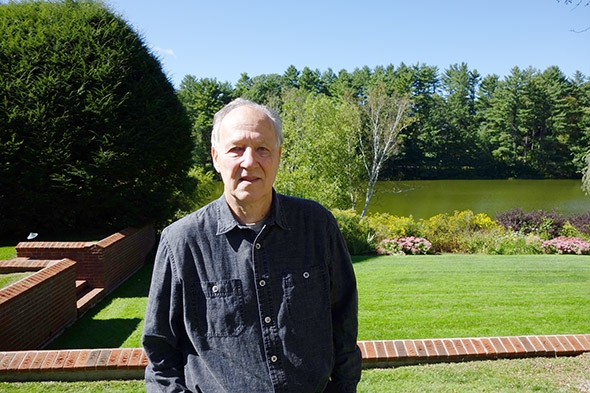 Werner Herzog, who has made more than 60 films, will visit classes in film, anthropology, and German literature, and participate in three public events during his Montgomery Fellow residency. (Photo by Bonnie Barber)

Considered one of the landmark figures of the New German Cinema, Herzog is “one of the world’s greatest filmmakers, working at the height of his creative powers,” says Film and Media Studies Associate Professor Jeffrey Ruoff.

Herzog’s Montgomery Fellowship presentation, consisting of a reel of highlights from his film career and an onstage conversation with the filmmaker, will be held at 7 p.m. on Wednesday, September 18, in Spaulding Auditorium. This is a free but ticketed event, and it is open to the public.

In addition to meeting with students and speaking to students in film, German Studies, and anthropology classes, Herzog will participate in two other public events. A screening of Herzog’s 2005 documentary Grizzly Man, followed by a question-and-answer session with the filmmaker, will be held at 7 p.m. on Thursday, September 19, in Loew Auditorium.

And at 11 a.m. on Saturday, September 21, Herzog takes the Spaulding stage with fellow documentary film director Ken Burns to discuss filmmaking, the challenges and rewards of various projects, and more, in “From Grizzlies to Gettysburg: Ken Burns and Werner Herzog Talk Shop.”

“I can’t wait for this,” says the Hopkins Center for the Arts’ Director of Film Bill Pence, who first met Herzog at the Telluride Film Festival in 1975. Pence says Herzog is “one of a kind. They both have great respect for one another, but they are poles apart as filmmakers.”

Herzog, who was recently in the news for a documentary/public service announcement he made about the dangers of texting and driving, answered a few questions from Dartmouth Now shortly after arriving in Hanover.

So this is the first time you’ve been back to Dartmouth since 1986.

That long? I thought it must have been at least 10 to 12 years, but it’s been even longer. My God. But it’s fine. There’s a certain continuity and it’s because of Bill and Stella Pence. I met Bill at Telluride (at the Telluride Film Festival) when I was there for the first time in 1974 or 1975. I’m settling in here at the Montgomery House, and it’s the most beautiful house I’ve seen in a very, very long time. We’ll use it for informal lunches and dinners with students and faculty. So I’m not the only inhabitant during the day. It’s an absolutely fantastic place to do intense meetings and encounters.

In an interview you did about your documentary From One Second to the Next, you talked about texting as a new form of culture and you said, “It’s coming with great vehemence.” Videos are part of the smartphone culture, and they’re getting shorter and shorter. As a filmmaker, are you worried about the attention span of the viewing public?

They tell you that videos should be no longer than 30 seconds. Crazy cat videos. But it doesn’t make me nervous, because if there’s something of real substance, people do watch it.

When you were approached about making this anti-texting and driving public service announcement, the sponsoring cellphone companies (AT&T, T-Mobile, Sprint, and Verizon Wireless) wanted you to make four 30-second films, correct? Why did you decide to make a 35-minute documentary instead?

Making four 30-second films was my task and I did that. But I had the feeling it should be a longer format because it would be much more effective if you really had a glimpse of the depth of emotion and guilt and the wounds that these catastrophes left in everyone. I simply took initiative, and it was tolerated because in each case—I covered four stories. I had one day of shooting and I didn’t add any days, so it didn’t cost more. But nobody knew what to do with it. I didn’t know either. So the idea came that it should be on the Internet and it went through the roof (the video has been viewed more than 2 million times). It will be shown now in 40,000 high schools across America and in driver’s education classes. If I prevented one single accident, it has been worthwhile.

How do you determine that a subject is right you for? What elements have to be present for you to want to make a film?

I’m a storyteller and I immediately can tell that this is going to be big. What I do is always coming with great vehemence at me. Most of the time things stumble into me. I’ve never searched for a new film. The moment I finish something, I already have five, six, seven films coming at me. The problem is always that I cannot catch up quickly enough. And I’m working faster today than before, partly because of technical advances. I can edit almost as fast as I’m thinking. Grizzly Man was edited in nine days.

So things have changed a bit. In My Best Fiend, about your collaborations with the actor Klaus Kinski, you described taking 11 days to stabilize a large ship in a Peruvian river when you were making the 1982 film Fitzcarraldo.

(Herzog laughs.) If you have a very heavy ship and have to pull it over a mountain, you cannot say, “Yes, at 7:30 we start pulling it.” There’s no precedence in technical history for doing something like that.

What do you think about studying film in an academic setting?

I have my doubts. I even founded my own rogue film school, which is guerilla-style procedures, including lock picking and forging documents. It’s against all that academia normally does. I think if you’re a film student, if you have the courage to fish in the murky waters and prepare for doing your things your way, it’s fine. The technical things you can learn in a week. I prefer people who travel on foot for four months because it probably has more value for you as a film director or filmmaker than four years in film school.

By the time you were 28, you had made something like eight films.

I made Aguirre when I was 28 and that was my 11th film. My first was when I was 19, and I earned the money to produce it myself. I worked as a welder doing the night shift in a steel factory while I was still in high school. I just knew I wanted to be a filmmaker.

You’re going to have a conversation onstage with Ken Burns on Saturday. Have you met him before?

Oh sure, I see him every year in Telluride and I’ve been to his place at Walpole (N.H.) just to talk about the kinds of films we are making, and deeper questions like what constitutes truth in cinema. I’m looking forward to that. He’s such a wonderful man.

Description
Jami Powell, curator of Indigenous art at the Hood Museum of Art, is highlighted in a story celebrating curators who are shaping museums beyond their legacies as colonial institutions.
The Boston Globe
Articles