President Hanlon Welcomes the Class of 2017

After getting to know one another through first-year trips and Orientation, members of the Class of 2017 got to meet a certain alumnus, one who stood in their shoes exactly 40 years ago. 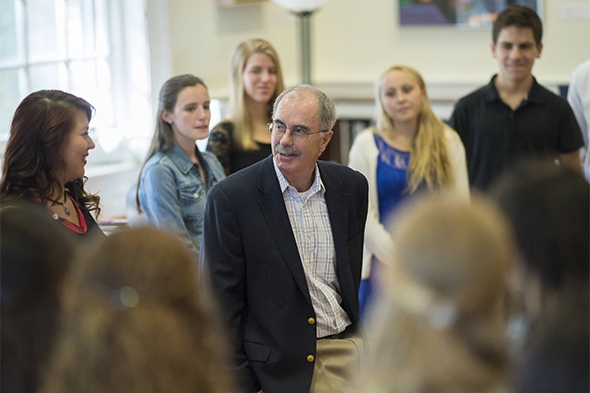 On the eve of the start of fall term—a chilly, clear Sunday—President Philip J. Hanlon ’77 personally welcomed the 1,117 members of the Class of 2017 to Dartmouth during the annual Matriculation ceremony.

“It’s exciting to welcome first-year students and connect with them personally,” said President Hanlon. “This is the start of their transformative journey at Dartmouth, and I’m honored to be a part of it from day one.”

Groups of 25 to 40 students, many dressed formally for the occasion, came through Parkhurst Hall in waves, starting in the morning and continuing into the afternoon. Presidential Fellows led students upstairs to the office of the President, who gave a short speech welcoming them to Dartmouth. After the brief talk, Hanlon spoke briefly and shook hands with each student as he or she left his office.

“It was great meeting President Hanlon. He made me feel really welcome,” said Elizabeth Smith ’17, a first-year student from Cornish, N.H.

“It’s pretty cool that he wanted to meet us personally,” said Glen Brickman ’17, who is from Greenwich, Conn. “It was exciting. I’m excited to start classes.” 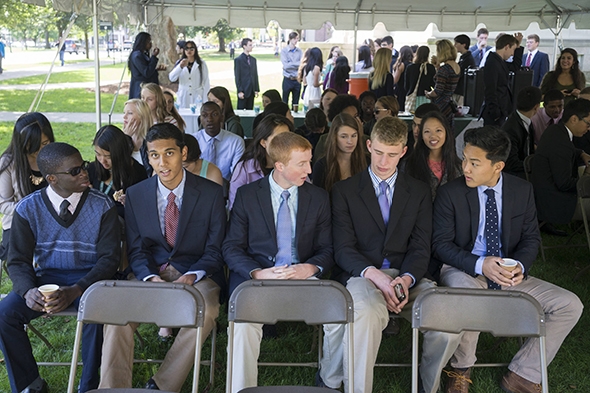 After their tour of Parkhurst, students walked to a tent in front of Blunt Alumni Hall, where they were received by members of the Dartmouth Class of 1967, who arrived on campus 50 years prior to the arrival of the Class of 2017. In keeping with Dartmouth tradition, the alumni presented each new student with a Class of 2017 pin.

Forty-seven percent of the Class of 2017 is receiving scholarship assistance. The average scholarship award is more than $42,000.

Paul Killebrew ’67 attended the event, and said he remembers matriculation from his first few weeks on campus: First-year students shook hands with then-President John Sloan Dickey in a ceremony in the Tower Room.  Killebrew, who lives in nearby Lyme, N.H., said it was a privilege to meet with the new students.

“It’s refreshing. The new students are so excited, it gives me an energy,” said Killebrew. “They’re so eager to start their Dartmouth experience, it makes you reflect on your own and appreciate it.”

The day marked the start of what will be a memorable week for new students, and also for Hanlon. This Wednesday marks his 100th day in office as president, and he will teach his first Dartmouth class—a first-year calculus course—on the morning of Monday, September 16.