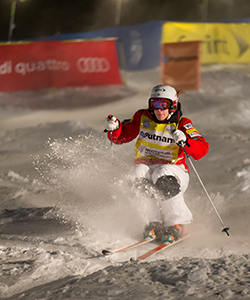 As the defending Olympic gold medalist in freestyle moguls skiing, Hannah Kearney ’15 is considered a favorite to win the event again at the upcoming Sochi Games. “Kearney is the face of her sport,” writes USA Today, noting that the Norwich, Vt., native would make history if she wins another freestyle skiing gold medal.

In the Liberty Mutual Insurance Town Gold film below, Kearney talks about her success, her hometown, and the challenges she has faced during her skiing career. “There’s a million people that have contributed to my life, to my success,” she says. “And I think that’s the case with every athlete, every person. When I succeed it’s a reflection upon them and the success of our community.”

In the film, Kearney’s father, Tom Kearney, talks about the influence that 1994 Olympic silver medalist Liz McIntyre ’87, a New Hampshire native, had on his daughter. “I remember her going to Liz McIntyre’s send-off parade and she came home and she said, “You know dad, I think it would be really cool to ski in the Olympics some day.’”
Written by
Office of Communications
Share this
FacebookTwitterEmail
Articles