“We haven’t held an event like this before,” said Drew Galbraith ’64a, senior associate director of athletics for Peak Performance. “It was an opportunity to bring together the Dartmouth community and the Hanover community, plus alumni here for Reunions, to watch one of the most decorated athletes in Dartmouth history.” 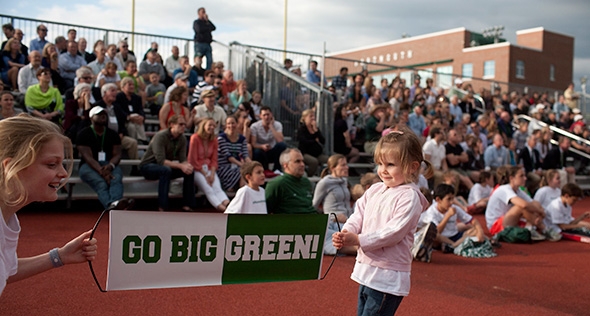 Dartmouth alumni and community members, including President Hanlon and Gail Gentes, gathered at Memorial Field to watch Abbey D’Agostino ’14 compete in her final race for Dartmouth. (Photo by Laura DeCapua)

Via an Internet connection, the 16-foot-high by 23-foot-wide video screen showed a crisp picture of the ESPNU coverage. The audio was also clear, so fans could hear when the announcers talked glowingly about Dartmouth, which they frequently did. Cheers erupted when they said D’Agostino visited the campus four years ago and “fell in love with the place.”

It was a spirited scene, with all sorts of D’Agostino fans. Kids wearing T-shirts with D’Agostino’s silhouette scrambled around the track with pompoms and ice cream near President Phil Hanlon ’77 and his wife, Gail Gentes. Maribel Sanchez Souther ’96, the former Dartmouth track coach who recruited D’Agostino, was there with her three children.

Sarah Geithner ’86 brought her daughter, Kaiya, and her daughter’s friend, Liza, both runners on Hanover High School’s cross-country team. “It’s a great community event, and a perfect night,” said Geithner. Kaiya and Liza said they occasionally see D’Agostino on their runs through rural Hanover. “We love running past her!” said Kaiya, clarifying that she does not “pass” D’Agostino—she runs “past” her in the opposite direction.

Carissa Crawford ’14, a member of the sailing team, said she was there “to support my fellow classmate,” and she was joined by Kim Betts ’12, a first-year student at the Geisel School of Medicine. Katherine Ellsworth ’89, in town for her 25th Reunion, had brought her three children.

As the race concluded, with D’Agostino crossing the finish line in third place, a big cheer went up from the Hanover crowd.