Art Made and Chosen by Students Adorns Parkhurst Walls

Works by a dozen Dartmouth student artists grace the walls of President Phil Hanlon ’77’s office in Parkhurst Hall. The display was selected and designed in consultation with him by six student curators, participants in the Hood Museum of Art’s intern program. 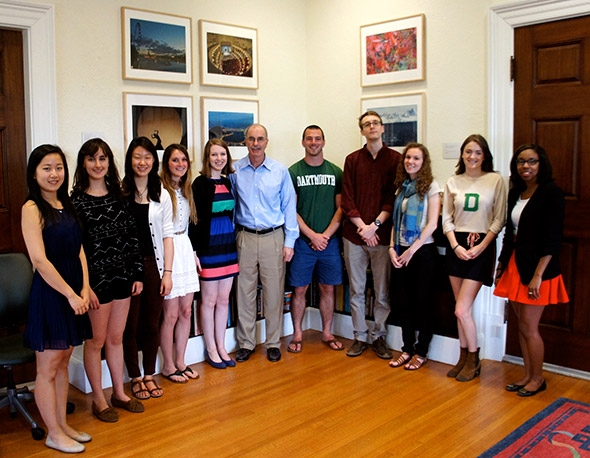 Last fall, President Hanlon extended an invitation to the Hood interns to take what they were learning at the museum and curate an exhibit of student art for his office.

“The exchange between the students and President Hanlon—from the beginning interview to the final celebration of seeing the work installed—was an amazing experiential-learning opportunity for the Hood interns, with a practical—and beautiful—outcome,” says Juliette Bianco ’94, the Hood’s deputy director.

While the museum’s curatorial intern program gives each student curator the opportunity to install an individual “Space for Dialogue” exhibition in the museum’s entryway, this project allowed the six interns to work as a team, Bianco says.

“The process started with the interns interviewing President Hanlon about his preferences for the office space and what kind of art appealed to him,” she says. “Their proposal included creating a Google Sketch-up virtual model—made by intern Xinyue Guo ’14—and placing the proposed art program on the walls within it.”

“The president’s office project was a great opportunity for me to collaborate with other interns on a curatorial task, as well as applying what I have learned in classes and the museum,” says Guo. “I first learned how to use the Sketch-up software during sophomore summer working at the Hood, and learned more about the program last term in my engineering class.”

“One of the pure pleasures of being Dartmouth’s president is having the opportunity to display and enjoy student art,” says Hanlon. “Gail and I appreciate the expertise student curators bring to their role, and we always come away from the process of selecting new pieces excited and amazed by the student artists who call Dartmouth home. That my office can be a venue for engaging others with their work is both humbling and a source of great joy for us.”

Highlighting “students’ talents and their diversity of experiences and interests” was an important goal for Hanlon and for the student curators, says student curator and photographer Julia McElhinney ’14. “We also wanted to show the many ways in which Dartmouth is able to offer students fresh perspectives on the world around them,” she says.

The group sought out campus artists in many venues, she says, including the studio art department’s autumn open studios event, as well as visiting student studios during winter term. “We also connected with the Off-Campus Programs office,” McElhinney says, reviewing entries to their student photography contest. The final selection includes paintings and photographs by a dozen current Dartmouth undergraduates and young alumni.

A still life in oils by Emily Grotz ’16 is among the pieces now hanging in Hanlon’s office, work from “Painting I” with Professor Jennifer Caine.

“Before the class I had never worked with oil paint before,” Grotz says; the course also served as an introduction to color theory and how to apply it. “Professor Caine called this project a ‘rite of passage’ as painters, because we were not allowed to use the same color twice. The entire class had to tackle this still life assignment by individually mixing the colors,” she says, adding that she is thrilled to be one of the artists selected. “The Hood interns selected such great pieces that really give the office a holistic view of what Dartmouth has to offer,” she says. “Some pieces were based on fossils the artist studied in an anthropology class, while others were photographed during study abroad trips or close by at Dartmouth’s organic farm.”

McElhinney expects the project’s impact will reach beyond Parkhurst’s walls. “President Hanlon invited all the student artists to his office for a reception and listened carefully to each of their personal stories and the stories of their artwork. These are stories that I trust he will share with his visitors, and that I hope will encourage him and his colleagues and guests to continue to support a strong liberal arts education,” she says.