E.E. Just Symposium: The Higgs Boson to the Music of Physics

The third Annual E.E. Just Symposium at Dartmouth is set to emerge on Halloween. “From the Higgs Boson to the Music of Physics: Exploring Creativity in STEM” is the title of the 2014 conclave. 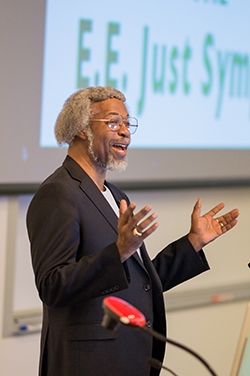 The symposium kicks off on Friday, Oct. 31, with theoretical physicist and television personality Sylvester James “Jim” Gates delivering the keynote address at 6 p.m. in the Arvo Oopik Auditorium in the Class of 1978 Life Sciences Center. All the symposium sessions will be held in Oopik, and are free and open to the public.

Gates, widely known for his appearances on shows such as PBS’ NOVA and The Elegant Universe, will provide a nontechnical introduction to the subject of gravitation waves, phenomena first theorized by Einstein as being ripples in space-time that may be traced back to the Big Bang.

The conference was conceived as a forum in which students in the E.E. Just Program could get access to leading scholars and researchers in the STEM fields of science, technology, engineering, and mathematics. But the annual event has increasingly drawn large numbers of Dartmouth faculty, staff, students, and visitors. Consequently, this year’s symposium is geared toward the entire community.

“The E.E. Just program is a Dartmouth initiative, targeting undergraduate students of color and first-generation students, to bolster their interest in the STEM fields,” says physicist Stephon Alexander, The Ernest Everett Just 1907 Professor and director of the E.E. Just Program.

“We want to develop personal and leadership skills for tomorrow’s scientists, focusing on the creative and collaborative side of the scientific endeavor,” Alexander says. “Ultimately, we want to increase the diversity of Dartmouth students who matriculate to graduate programs in STEM.”

Farran Briggs, Margaret Gellar, John Asher Johnson, and Michael Peskin are among the science stars who will be speaking at the symposium.