For Benjamin Bauer ’15, who grew up in South Strafford, Vt., the strong focus on the undergraduate experience at Dartmouth was a big incentive for him to attend. In addition, he says, “The connection between the College and the natural world around us that the Dartmouth Outing Club (DOC) has forged was a huge draw for me.” 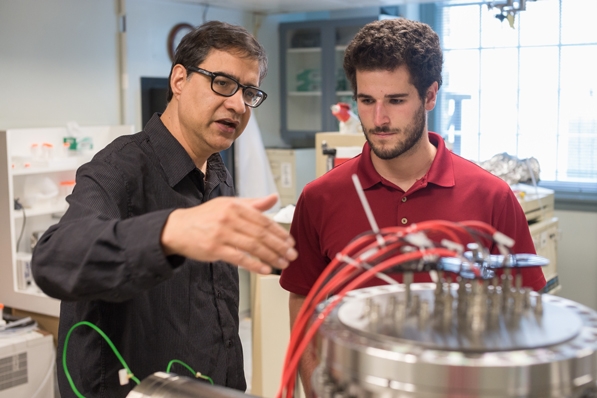 “Professor Sharma helped me to become proficient in both the laboratory and scientific writing,” says Benjamin Bauer ’15, right, about his adviser, Professor of Earth Sciences Mukul Sharma. (Photo by Eli Burakian ’00)

Beyond the lure of the outdoors, Bauer is committed to geological pursuits. “Research, to me, is important because it pushes the boundaries of human knowledge. It forces us to be innovative, creative, and careful about how we approach complex problems and questions,” he says.

“Undergraduate research allows students to be exposed to the meticulous and very much in-depth approaches that are taken in graduate school, which ultimately makes us much more prepared to continue our education. My research has focused on the mineralogy and geochemistry of the Cretaceous-Paleogene (K-Pg) boundary, which was marked by the famous and widely known mass extinction of the dinosaurs 66 million years ago.”

With his adviser, Professor of Earth Sciences Mukul Sharma, Bauer worked toward quantifying the concentration and isotopic composition of osmium in rock samples from the boundary strata. “We have found that the rocks all carry isotope signatures consistent with that of extraterrestrial material,” Bauer says. This gives credence to the theory that the demise of the dinosaurs may be traced to an impact of either a comet or an asteroid, thought to have occurred in the area of the Yucatan.

“Ben was looking to do work in a lab over the last summer when I wanted to have a procedure developed to quantitatively separate less than a milligram of magnetic grains locked up in rocks from the K-Pg boundary,” says Sharma. “I also wanted to find a mineral precipitated from melted ejecta resulting from the K-Pg impact. Ben figured out the best procedure to separate grains by applying strong magnetic field to gravitationally fed slurry of K-Pg rock powder.”

“Professor Sharma helped me to become proficient in both the laboratory and scientific writing,” he says. “He also helped me understand geochemical techniques that are complex and involved, but very powerful in terms of what they reveal about Earth’s past.”

Bauer will be working as a geochemistry lab technician with a gold mining company in Denver after graduation. “I plan on doing this for at least a year or so. After that, I plan to attend graduate school in preparation for a career in the mineral resources sector.”