Evan Griffith ’15 came to Dartmouth from New York City to pursue a double major in music and psychology “and to learn from the amazing faculty,” he says. “Being able to pursue music in so many different ways here has been incredible for me. 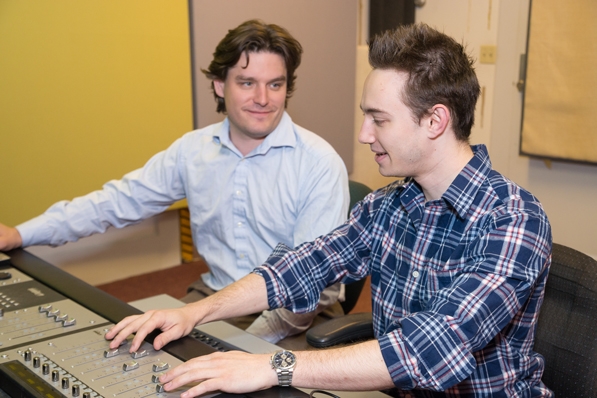 “Research has allowed me access to eye-opening bodies of work while at the undergraduate level,” says Evan Griffith ’15, right, photographed with his adviser, Assistant Professor of Music Spencer Topel. (Photo by Eli Burakian ’00)

“Being a Jewish organist, composer, and conductor, the intersection of music and my religion has always fascinated me,” says Griffith. This artistic and spiritual crossroad has played a crucial role in Griffith’s Dartmouth experience, from founding and directing the Dartmouth Hillel Choir to writing a sacred service of Jewish music.

“Research is crucial to exploring your personal intellectual curiosity while also expanding the knowledge of those around you,” he says. As an undergraduate, he participated in the Sophomore Science Scholars and Presidential Scholars programs. “Research has allowed me access to eye-opening bodies of work while at the undergraduate level,” says Griffith.

“For my thesis, I explored the history and current state of music in Reform Jewish worship. My project had two components. I first researched the history of Jewish music online, by examining music and prayer books, and then by visiting temples. I conducted firsthand interviews with cantors and music directors,” he says.

“I then produced my own Jewish music in our recording studio, in an effort to create music that is in line with historical trends while also being contemporary and accessible in style.”

Griffith says that his adviser, Assistant Professor of Music Spencer Topel, guided him in carrying out research and constructing a thesis, as well as assisting in the selection of singers and repertoire to be recorded. “He gave me crucial advice on both the investigation itself and on musical considerations in my own writing,” says Griffith.

“Focused mentorship in the honors thesis process really offers Dartmouth seniors a distinct advantage over other institutions,” says Topel. “In the case of Evan’s work, the close supervision by both myself and my colleague and mastering engineer Sunny Nam resulted in a truly unique learning experience—one that simultaneously reinforced the scholarship and practice of music production in the specific context of Reform Judaism.”

As to his plans after graduation, Griffith says he has “no idea yet, but hopefully something musical!”