Rohina Malik, a playwright, actor, and solo performer whose first play, Unveiled, opened to wide acclaim in Chicago and New York, will be the keynote speaker for Dartmouth’s 2016 Martin Luther King Jr. Celebration, focused this year on the theme “Develop a World Perspective.” 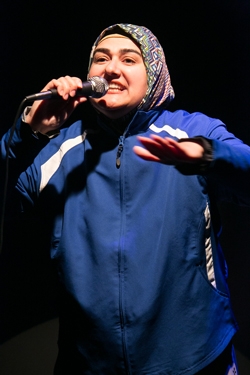 The announcement comes as the MLK celebration committee is issuing a call to the broad Dartmouth community to nominate candidates for the Social Justice Awards, presented during the MLK celebration at the end of January. The deadline for submissions is Nov. 6.

This year, the MLK event organizers want to emphasize that institutional diversity is about much more than race and gender representation, says Evelynn Ellis, vice president for Institutional Diversity and Equity.

“Diversity for us has many, many components. Our concern with social justice reaches across the world.” Ellis says. “What we are trying to do every year with the celebration is to reach out so that more and more people can experience the power behind engaging a world perspective and being actively, intellectually involved.”

Malik’s work offers a strong example of the combination of social activism, intellectual and artistic engagement, and a commitment to dialogue and education, Ellis says.

Malik was born and raised in London, and now lives in the Chicago area. She builds her work on the themes of women and men who practice Islam and the ways in which they define their identity within Western culture.

Nominations are open for Dartmouth’s Social Justice Awards, established to recognize members of the College community—including alumni, current and former faculty, staff, student groups, and others with ties to the College—who have contributed significantly to peace, civil rights, education, public health, environmental justice, or social justice.

The awards are given in four categories: Emerging Leadership, Ongoing Commitment and Lifetime Achievement, and Student Organization.

In addition, the College presents two commemorative awards, The Lester B. Granger 1918 Award for Lifetime Achievement, presented to a Dartmouth College graduate or graduates whose lifelong commitment to public service has been exemplary; and The Holly Fell Sateia Award, recognizing a faculty or staff member at Dartmouth who is an enthusiastic and effective leader in advancing diversity and community.

To read detailed descriptions of the awards and to submit a nomination, the Social Justice Awards website.

As part of her MLK address, Malik will perform excerpts from her plays and will follow up with a question-and-answer session, which will be moderated by Ellis.

Ellis saw Malik perform Unveiled in April, when the playwright and civil rights activist was at Dartmouth for Islam Awareness Week. In the one-woman performance piece, Malik portrays five Muslim women from different backgrounds—all of whom wear the hijab headscarf—talking about their lives in the post-9/11 world.

“It’s stunning,” Ellis says. “Her one-woman show covers more issues in 20 to 30 minutes than most seminars or discussions can cover in three days.”

The early announcement of Malik’s keynote address presents an opportunity to increase outreach and encourage nominations for the Social Justice Awards, says Gail Gentes, a member of the MLK celebration committee. It is important that people know that anyone can submit a nomination or receive an award, as long as the nominees have a connection to the Dartmouth community, she says.

Ellis says it is easy to get discouraged about our world when we read the news, or simply because of the incremental nature of working for social justice.

“I always look forward to the Social Justice Awards because I know I am going to get a shot in the arm. It is a reminder for all of us to help us keep going,” Ellis says.

The nominating process encourages people not only to honor high-profile activists, but also to look around them and recognize the crucial, often quiet work of friends and colleagues in the struggle for social justice, Ellis says.

“I bet our Dartmouth colleagues are sitting by someone right now, or spent the summer with someone, who really should be nominated for one of our awards,” she says.