As we read about the looting and destruction of cultural heritage sites in Syria, ISIS tends to make the headlines. Yet, a recent Dartmouth led study published in Near Eastern Archaeology analyzing satellite imagery of nearly 1,300 archaeological sites in Syria reveals that the Kurdish YPG, opposition forces and the Syrian regime have also been major players accounting for this devastation.

According to the study, war-related looting is most widespread in areas where centralized authority is the weakest, as in regions held by the Kurdish YPG and other opposition forces where more than 26 percent of sites have been looted since the war began. In contrast, 21.4 percent of sites have been looted in ISIS-controlled areas, and only 16.5 percent in Syrian regime areas. Led by Jesse Casana, a specialist in the archaeology of the Middle East, an associate professor of Anthropology at Dartmouth and director for site databases and remote sensing at ASOR’s Cultural Heritage Initiatives, the study reports that more than 25 percent of archaeological sites in Syria have experienced looting since the war began in 2011.

“Most media attention has focused on the spectacles of destruction that ISIS has orchestrated and posted online, and this has led to a widespread misunderstanding that ISIS is the main culprit when it comes to looting of archaeological sites and damage to monuments,” says Casana. “Using satellite imagery, our research is able to demonstrate that looting is actually very common across all parts of Syria, and that instances of severe, state-sanctioned looting are occurring in both ISIS-held and Syrian regime areas.”

For the first time ever, researchers assessed damage to sites in near real-time by comparing satellite data from Digital Globe’s vast archive (from 2007 to the present) to older imagery including declassified CORONA satellite imagery from the 1960s. While the destruction of buildings and monuments in Syria is often recognizable from the ground, satellite imagery is especially effective at revealing locations where looting, earthmoving and construction in non-urban areas has taken place. Rather than having to rely on Google Earth and other open-access mapping platforms, which may not be up to date, through ASOR’s Syrian Heritage Initiative, researchers secured access to Digital Globe’s satellite imagery, which is updated almost daily. The study evaluated nearly 1,300 sites in Syria, including 700 “priority sites” that had already been excavated.

Researchers catalogued the type of destruction to the archaeological sites by using a damage assessment protocol, which compared pre-war images to the most current images available. Even though looting was illegal before the Syrian war, it was still common, yet, with the breakdown of civil authority and the desperate living conditions, looting has been significantly on the rise. The scope of the looting was classified into three categories: minor looting with 15 or fewer looting holes in one area made by pickaxes; moderate, with more than 15 holes but still only impacting a relatively small part of the site; and severe looting, which could only have been accomplished by a small army of laborers often with the use of heavy machinery.

While minor incidents of looting are most common in Kurdish YPG and opposition-held areas, the study found that 42.7 percent of looting in ISIS-held areas was classified as severe and moderate, whereas this kind of heavy looting accounts for 22.9 percent in Syrian regime areas, 14.3 percent in opposition force-held areas, and only 9.4 percent in areas held by the Kurdish YPG (See table below from the paper). According to researchers, these results indicate a pattern of widespread but small-scale subsistence looting in opposition-held and Kurdish YPG areas, but more intensive, potentially state-sanctioned looting in Syrian regime and ISIS-held regions 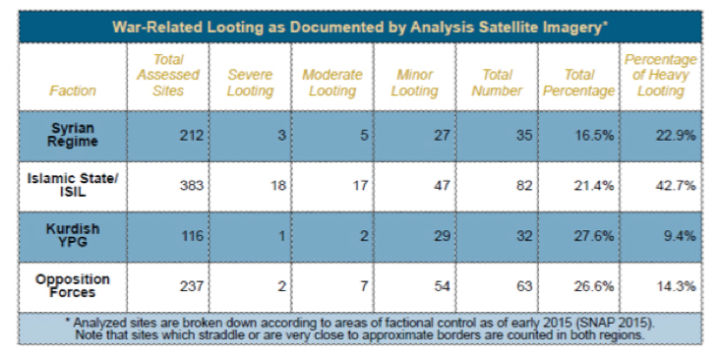 One of the most well-known incidents of looting occurred at Apamea, a massive Roman city in western Syria. The satellite images indicate that looting began in the start of 2012, after Syrian forces invaded the area, and continued during the Syrian occupation of the site through at least the fall of 2013. However, the most extreme phase of looting was conducted in the government-administered portion of the site with privately held fields remaining untouched until several months later when looting holes made by heavy machinery encroached into nearby areas on a systematic block by block basis with Syrian soldiers only 200 meters away.

Through the study, broader patterns in the severity, scope, and timing of the damage to numerous archaeological sites have been revealed, providing an analysis of the looting and damage at a much broader scale, especially to areas for which access has become restricted due to the ongoing conflict. As the research team continues to monitor sites, especially in northern ISIS-held areas of Syria, the study’s findings can serve as a valuable resource to heritage officials and archaeologists, especially after the war is over.

Associate Professor of Anthropology Jesse Casana is available for comment at jesse.j.casana@dartmouth.edu.