Settling the Controversy Over Photo of Lee Harvey Oswald

A new study by Dartmouth researchers helps to refute one of the most famous conspiracy theories in U.S. history. 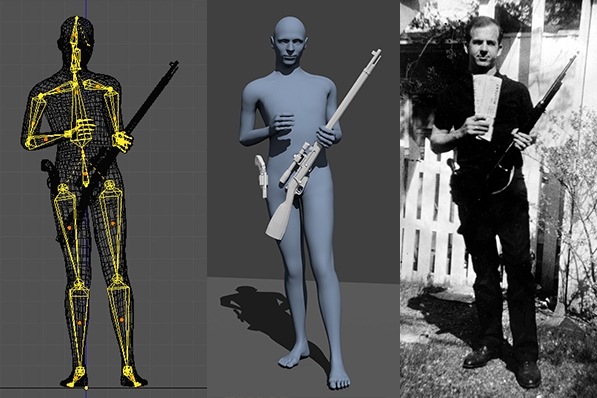 Dartmouth researchers built and posed a physiologically plausible 3-D model of Lee Harvey Oswald to match his appearance in the famous photo. By adding the appropriate mass to each part of the 3-D model, they were able to perform a balance analysis that revealed that although Oswald appears off-balance, his pose is stable. (Computer images courtesy of Hany Farid; Photo of Oswald from the Warren Commission)

Whether Lee Harvey Oswald acted alone to assassinate President John F. Kennedy has been the subject of countless articles, books, and movies. Conspiracy theories point to purported inconsistencies in the events of Nov. 22, 1963, and in the evidence collected against Oswald. One such example is a photograph of Oswald in his backyard holding a rifle in one hand and Marxist newspapers in the other. The photo was particularly damning because it showed Oswald holding the same type of rifle that was used to assassinate Kennedy.

But research led by Hany Farid, a professor of computer science, uses a new digital image forensics technique and a 3-D model of Oswald to show that the photo is authentic.

“Our detailed analysis of Oswald’s pose, the lighting and shadows, and the rifle in his hands refutes the argument of photo tampering,” Farid says. A pioneering researcher in digital forensics whose team develops mathematical and computational techniques to detect tampering in photos, videos, audio recordings, and other documents, Farid has examined the photo closely before in studies in 2009 and 2010, but these studies did not address questions about Oswald’s pose. In the new study, Farid and his team conducted a 3-D stability analysis, concluding that, in fact, Oswald’s stance does not support claims of photo-tampering. The study appears in the Journal of Digital Forensics, Security and Law.

Farid teamed with Assistant Professor Emily Whiting, who specializes in architectural geometry, computer-aided design, and 3-D fabrication. With the help of graduate student Srivamshi Pittala, they built a 3-D model of Oswald and posed this model to match his appearance in the backyard photo. By adding the appropriate mass to each part of the 3-D model, they were able to perform a balance analysis, revealing that although Oswald appears off-balance, his pose is stable. The analysis also showed that the lighting and shadows are physically plausible and that the length of the rifle is consistent with the length of the rifle used to kill the president.

“Our analysis refutes purported evidence of manipulation in the Oswald photo, but more generally, we believe that the type of detailed 3-D modeling performed here can be a powerful forensic tool in reasoning about the physical plausibility of an image,” Farid says. “With a simple adjustment to the height and weight, the 3-D human model that we created can be used to forensically analyze the pose, stability, and shadows in any image of people.”