Examining Health and Wellness at the Ends of the Earth

Be’sha Blondin, a Sahtu Dene elder, came to Dartmouth for the conference. (Photo by Robert Gill)

Indigenous youth and elders in the Arctic must work together to advance their communities’ wellness as the region’s importance on the world stage grows.

That’s one of the themes discussed at the Fulbright Arctic Initiative Consensus Seminar on Community Health and Wellness in the Arctic, held at Dartmouth this week. The three-day workshop, which started Monday, was hosted by the Institute of Arctic Studies at the John Sloan Dickey Center for International Understanding.

The U.S. State Department’s Fulbright Arctic research program funds interdisciplinary work for 16 scholars from the eight countries on the Arctic Council, an intergovernmental forum of the eight member states that border the Arctic Circle. The Fulbright scholars, who come from a variety of disciplines, are charged with finding solutions to international policy questions presented by changes in the polar region, including depletion of sea ice, opening of oil and mineral rights, regulating new shipping routes, protecting the environment, and maintaining the rights of indigenous people and other populations in the Arctic.

The Fulbright workshop was coordinated by Ross Virginia, Myers Family Professor of Environmental Science, director of Dartmouth’s Arctic Institute and co-lead scholar for the Fulbright Arctic Initiative, and Susan Chatwood, a Fulbright Arctic Scholar and executive and scientific director of the Institute for Circumpolar Health Research in Canada. The program’s 16 researchers are working on collaborative studies for 18 months in 2015-2017, coinciding with the United States’ chairmanship of the Arctic Council.

“This week’s seminar came about because the Fulbright scholars realized that to do their job well, they needed to expand the range of shareholders and bring together a wide range of voices in a community-based, consensus-building way,” says Virginia, whose work in polar ecosystem ecology and policy issues has put Dartmouth at the convergence of historic challenges being addressed under U.S. leadership of the Arctic Council.” They need to ask better research questions that generate knowledge and build networks that improve community wellness and help policy makers.” 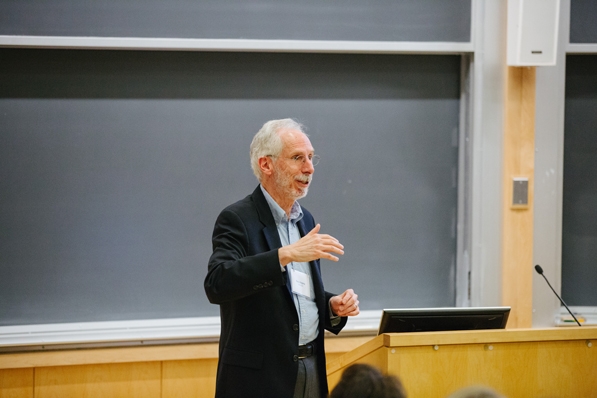 Ross Virginia, the director of Dartmouth’s Institute of Arctic Studies, was one of the organizers of the event. (Photo by Robert Gill)

The workshop engaged Arctic researchers, indigenous leaders, and youth and government officials in holistic approaches that improve community wellness in the circumpolar region. The participants addressed key issues involved in community health and wellness, such as physical, environmental, social, and economic factors.

In Monday’s plenary session, Inuit leader Sheila Watt-Cloutier moderated a discussion on socioeconomic issues related to natural resource development, traditional frameworks for wellness, and indigenous conceptions of health and well being. “The kind of strategizing that needs to happen is absolutely key to moving forward,” she says. “As indigenous peoples, we do have to be taking part in research areas that need to be addressed.”

Natasha Mablick-Simonee, a youth group member from Pond Inlet, a predominantly Inuit community in Nunavut on northern Baffin Island in Canada, told participants that mining, shipping, offshore seismic activity, oil, gas, and the government’s treatment of indigenous people are key issues. Nunavut is the largest, northernmost, and least populous territory of Canada. It is one of the most remote, sparsely settled regions in the world, with a population of about 32,000, mostly Inuit. “Sixty percent of Nunavut’s population is under age 30, so the involvement of youth is important,” Mablick-Simonee says. “The youth serve as a connection between older generations and modern issues.”

Be’sha Blondin is a Sahtu Dene elder and founder of the Northern Integrated Cultures with the Environment, a nonprofit group that helps elders pass on the way of life of the First Nations to youth in an effort to build strong communities grounded in ancestral teachings with a healthy environment. “If we don’t have the environment in a safe place, we won’t have anything for the future,” says Blondin, a traditional healer from the Northwest Territories. “We have to fight for the water, the land, and animals because they provide us with everything we need. If you’re damaging Mother Earth, the damage will be forever.”

Blondin says many of the problems in Canada’s indigenous communities stem from abuses in the government’s former system of church-run residential schools. From 1876 until 1996, more than 150,000 aboriginal children were forced to attend Christian schools that attempted to assimilate them into Canadian society. Canada’s Truth and Reconciliation Commission concluded last year that the residential schools policy was an attempt at “cultural genocide” of aboriginal people in Canada.

She says aboriginal elders and traditional healers are critical to improving their communities, offering wisdom and powers that modern medicine and outside experts do not possess. “If we don’t start training our youth now to become medicine people, there soon won’t be elders to train them,” she says. “We need to take more pride in our cultural and traditional ways.”

Kyle Wark, an indigenous researcher and policy analyst at First Alaskans Institute, told participants that the Arctic’s aboriginal people are “refugees in our own land,” in part because of the “historic trauma” that boarding school survivors pass to the next generations. He notes that differences between Western and indigenous concepts of medicine, healing, health, well being and risk factors aren’t recognized. “Too often, Western concepts are the default, but we need to navigate that reality to successfully work with aboriginal people,” he says.

“We need a connection to our ancestors who give us strength,” Wark says, adding that aboriginal people consider the human body to be merely a physical shell that holds “our true self,” or a person’s spirit and its connection to spirits of his or her ancestors and environment.