Dartmouth will be site of an international summit that will assess the response to the devastating April 25, 2015, earthquake in Nepal. 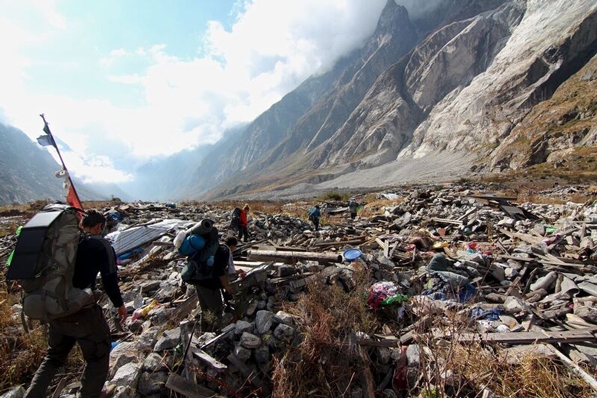 Western observers walk through the debris of Langtang Village in the Langtang Valley of Nepal in the days following the April 2015 earthquake. (Photo by Austin Lord ’06)

Representatives from the worlds of technology innovation, medical relief, anthropological scholarship, and the visual arts, as well as members of the Nepalese government, will gather in Hanover for the Nepal Earthquake Summit hosted by the John Sloan Dickey Center for International Understanding.

“One objective for Dartmouth is to walk our walk in terms of being multidisciplinary, spanning boundaries, and getting a full representation of disciplines and approaches to the problem of disaster relief and redevelopment,” says Kenneth Bauer, program manager in human development at the Dickey Center.

“So we have people from a remarkably broad spectrum of perspectives converging here on campus to both represent and talk about the disaster, to talk about what they have done individually or as organizations, and to make connections and look forward to the future,” Bauer says.

The majority of the proceedings will be broadcast through social media and the Internet to Nepalese activists, scholars, and interested parties around the globe, Bauer says.

“We’re having a live stream of all the panels and all the major speeches. We’ll have Instagram. We’ll have Twitter. We’ll have Facebook. So there will be a very interactive online international and national community that is also paying attention. It’s a unique community that’s gathering around for the summit,” he says. 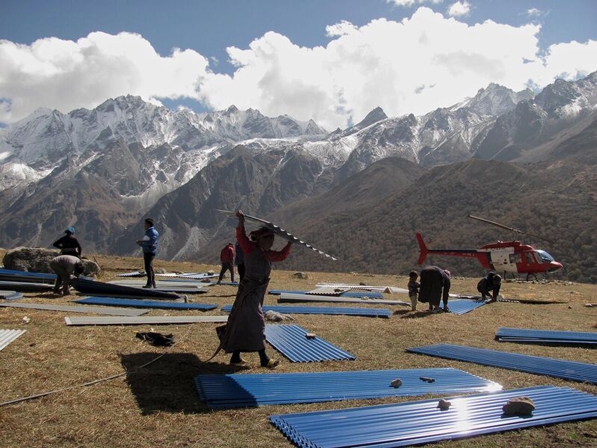 Helicopters drop sheets of tin to earthquake survivors in anticipation of the monsoon season during relief operation in Langtang Valley after the April 2015 earthquake. (Photo by Austin Lord ’06)

Since the 2015 earthquake, which killed more than 8,000 people, injured tens of thousands, and leveled whole villages in many remote regions of Nepal, Dartmouth has taken a leadership role in relief and rebuilding efforts, which will be the subject of panel discussions throughout the summit.

Participants will hear reports from a task force led by Nepalese Dartmouth students and from a College committee that includes representatives from the student body, the Office of the Provost, Geisel School of Medicine, Thayer School of Engineering, the Department of Anthropology, and the Dickey Center, which facilitated distribution of temporary shelter kits, set up medical camps, provided medicine and supplies, and helped with redevelopment logistics after the disaster.

There will also be presentations from Dartmouth students who developed phone apps and participated in coding projects to help map the devastation and connect people caught in the disaster with family and relief organizations.

Associate Professor of Anthropology Sienna Craig, a leading scholar on Himalayan and Central Asian culture, advised relief efforts and traveled to Nepal to record personal accounts of the disaster; her trip was funded by a National Science Foundation RAPID grant. She will present her findings with her co-authors at a panel discussion.

The proceedings will begin with a round-table discussion about the “Narratives of Disaster“ exhibit at the Hood Museum of Art, featuring photographers James Nachtwey ’70 and Kevin Bubriski. It closes with a town hall meeting; one of the participants will be Mahendra Shrestha, chief of policy, planning, and international cooperation for Nepal’s ministry of health.

In addition to the Dickey Center, which oversees the Straus 1960 Family Symposium, the Department of Anthropology, Asian and Middle Eastern Studies Program (AMES), Linguistics Program, Office of the Provost, and Dean of the Faculty are contributing to the Nepal Earthquake Summit.