Alumni and Students Create Theater Together for VoxFest

“It’s been an incredible experience, being part of a new work,” says Jaclyn Pageau ’18. 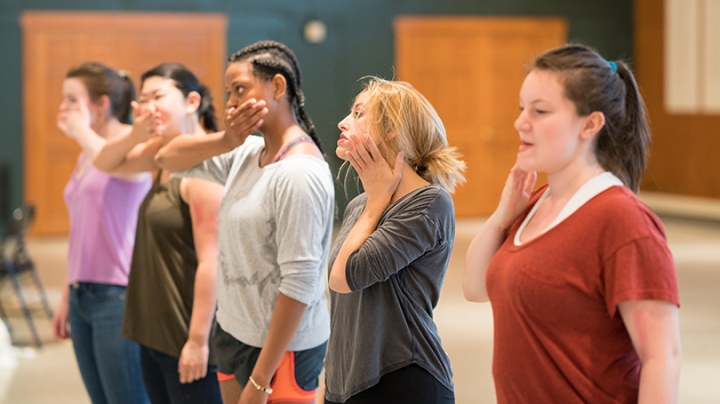 Some of the actors for VoxFest productions are professionals in residence for the week and some are students. (Photo by Eli Burakian ’00)
7/14/2016
Body

Graduates of Dartmouth’s theater program have forged successful careers on stage and screen all over the world. Each July, a cadre of alumni return to campus for VoxFest, a weeklong showcase of innovative new projects, and current drama students work alongside the pros.

“In 2012 we really wanted to start our own theater company, but rehearsal space in New York is way too expensive, so we approached Dartmouth’s theater department and asked for a few rehearsal rooms so we could work on one of my plays during the summer,” Mulley, a playwright, recalls. The department let them use the 180-seat Warner Bentley Theater. Additional support for VoxFest is provided by the offices of alumni relations, the dean of faculty, the provost, the president, and the Monahon Family Fund and other donors.

Some of the actors in VoxFest productions are professionals in residence for the week.  Students can join casts and crews if they enroll in Associate Professor Jamie Horton’s summer course, “New Plays in Production.”

VoxFest began this year with an improvisational performance of a collage of new works curated by Olivia Gilliatt ’08.

“It’s wonderful to be back in this theater,” Gilliatt said. “There’s something so special about coming to Hanover in the summer, to go swimming and be part of nature while at the same time working with peers who have had professional experience.”

With other alumni and a few students, Gilliatt, performed in Mulley’s play Grey Lady. Set on Nantucket during the Civil War, the production combines music, dance, poetry, letters, and dialogue to tell the fictional story of Cady Hood, whose husband is killed at the battle of Antietam. Unwilling to spend three years in mourning for her husband—and wanting action—Hood disguises herself as a man and goes off to war.

“We know of 400 women who actually did that during the Civil War,” says Mulley, who has done extensive research for her play. “I wanted to invent a character who finds herself as she learns how to perform field medicine on the battlefield.”

Carol Brown ’12 portrayed Hood as a women shattered by her husband’s death, yet unwilling to let grief overwhelm her. The play also features a sort of Greek chorus of women, who blend singing and movement to tell a story that asks provocative questions about war and gender. The chorus included Jaclyn Pageau ’18, Claire Feuille ’18, and Celeste Jennings ’18.

“It’s been an incredible experience, being part of a new work,” Pageau said during a rehearsal. “To have the playwright in the room as you rehearse and to work with alums in the professional world who have been so willing to share what they’ve learned.”

In addition to Grey Lady, VoxFest presented Grab the Land, billed as “a devised theater piece that examines identity, privilege, and what it means to grow up American.” Clif Campbell ’04 directed.  Another project in progress, Macbeth in Rhythm, explores Shakespeare’s text through rhythm and song. It was directed by Hannah Chodos ’06, and featured Ben Weaver ’03.

One play returned to VoxFest for the second summer of development. Tear a Root From the Earth is a folk opera about a family in war-torn Afghanistan, written by John Bair ’06 with music and lyrics by Americana and folk artist Johnny Walsh. Director Marina McClure ’04 says the project started as a collection of songs that Walsh wrote for his band, Gramophonic, while he was living in Kandahar, Afghanistan.

“We have since adapted the concept album into a full-length musical and begun a partnership with Qais Essar, a leading rabab player, who is collaborating with Johnny on the music as well as performing,” McClure says.

A rabab is a bowed string instrument dating back to the 8th century.

“Last week was our first opportunity to fully integrate the rabab with Western instruments and create the fusion of Afghan and American sounds and hear our actors sing the songs in act two. So it was a pretty thrilling week,” says McClure.

Tear a Root From the Earth will be performed as a staged concert this fall at the Afghanistan Embassy in Washington, D.C.

Summing up VoxFest 2016, Mulley says “by the end of the four performances I was really struck by how each of the projects is on the pulse of American theater, each telling a story that needs to be told, and each with a sense of urgency.”

This summer’s festival, she believes, was the most successful so far.

“The students were well integrated—necessary, in fact—to each project, and the artists were given all the space and support they needed to explore, to play, and then come together and share their work.”