Biologist Sharon Bickel says her team’s discovery is “the most important work of my career.” 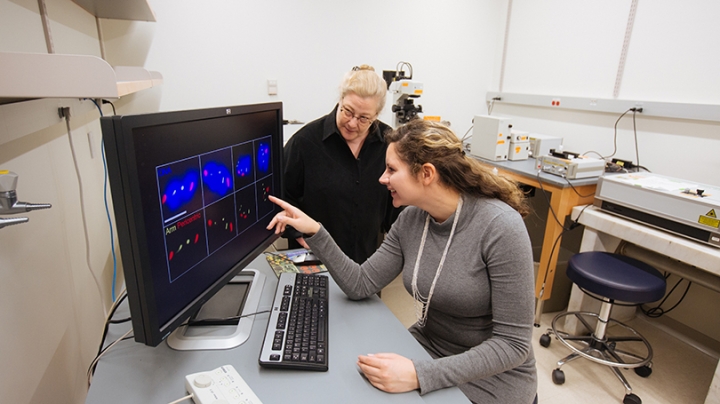 Associate Professor of Biological Sciences Sharon Bickel and her students have made a breakthrough in the understanding of age-related genetic anomalies that can lead to miscarriages and Down syndrome.

“These age-related outcomes are caused primarily because of mistakes in chromosome segregation that occur during the specialized cell division called meiosis that gives rise to the egg,” Bickel says. “For a woman in her 30s, the probability of these errors increases dramatically, and by the time she reaches her early 40s, the risk is 1 in 3.”

One hallmark of aging cells is an increase in the damage of cellular components due to reactive oxygen species (ROS), oxygen molecules that have picked up an extra electron that makes them highly reactive and damaging. Bickel’s team has demonstrated for the first time that increasing the levels of ROS in oocytes (the female cells that undergo meiosis) causes a significant increase in chromosome segregation errors.

“These results have allowed us to gain insight into a phenomenon that represents a major reproductive health issue for women in their 30s and 40s,” says Bickel.

During meiosis, chromosome pairs do an elaborate dance in which they come together and then move apart, resulting in the formation of an egg. An overabundance of ROS in oocytes could disrupt the accuracy of this process, causing an egg to receive too many or too few chromosomes. Such a mistake could lead to Down syndrome, in which the egg receives an extra copy of chromosome 21.

For more than 20 years, researchers have hypothesized that the accumulation of oxidative damage could cause segregation errors during meiosis, but the work conducted in Bickel’s lab has now demonstrated this. The team’s findings appear in a paper published online in PNAS (Proceedings of the National Academy of Sciences).

One prerequisite for accurate chromosome segregation is something called sister chromatid cohesion, Bickel explains. Cohesion refers to protein-mediated physical linkages that hold sister chromatids together. In meiotic cells, cohesion between sisters also holds a chromosome pair (recombinant homologs) together and helps to ensure that the pair segregates accurately during the first meiotic division. If cohesion is lost prematurely, the probability that chromosomes will undergo segregation errors is much higher. The work conducted at Dartmouth has now shown for the first time that increased levels of ROS in the oocyte result in premature loss of meiotic cohesion, which then leads to segregation errors.

“Not only does our work provide insight into a phenomenon that negatively affects pregnancy outcomes, it also raises the exciting possibility that there may be approaches to slow down the accumulation of oxidative damage, lowering the incidence of chromosome segregation errors in older women,” says Bickel.

“This is the most important work of my career,” she says.

As generations of geneticists have done, Bickel and her team used the fruit fly for their experiments. “In fruit flies we can use genetic techniques to decrease the proteins that normally neutralize ROS and therefore experimentally increase ROS levels within the oocytes of a living female fruit fly,” Bickel says. “Then, by looking at her offspring, we can quantitatively measure how often chromosome segregation errors occur within her oocytes.  These are the first experiments to look at the effect of ROS on chromosome segregation in vivo—using live organisms.”

Based on these findings, one possibility is that a diet rich in antioxidants may be able to slow the age-related demise of meiotic cohesion. Bickel’s lab is going to test this hypothesis by feeding fruit flies antioxidants and measuring whether the increase in segregation errors that they have previously observed in “aged” oocytes can be suppressed by dietary interventions.  This work is part of the larger focus of her lab, which is aimed at “defining the pathway of events necessary for chromosomes to ‘do the right thing’ during meiosis.”

Bickel credits graduate student Adrienne Perkins with doing most of the actual experimental work—“95 percent of what is in the paper we just published.”

The paper’s authors include Perkins as first author, Thomas Das ’13, graduate student Lauren Panzera, and Bickel. “Tommy Das is the one I convinced to start all this, and he did the initial experiments,” says Bickel. “Lauren Panzera is a second-year grad student who did a rotation in my lab last year. The project on which she was working turned out to be critical for us to address one of the reviewer’s comments.”