“We are very excited to return to the NCAA championships,” says Coach Barry Harwick ’77. 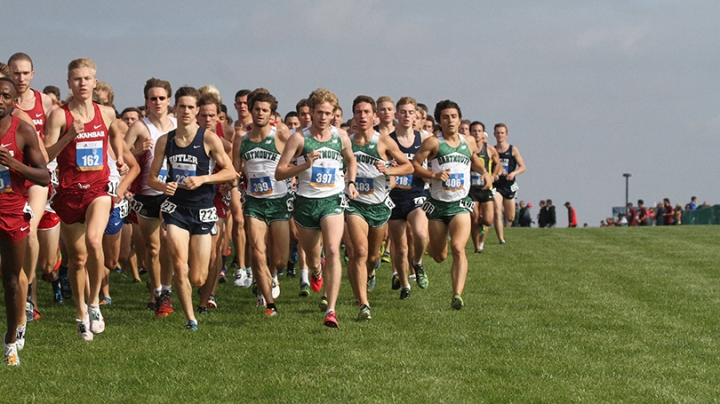 The Big Green was one of 13 teams from across the nation to earn an at-large berth following Friday’s regional meets. (Photo courtesy of Dartmouth Athletics)
11/15/2016
Body

The Dartmouth men’s cross-country team is headed back to the NCAA Championship for an Ivy League-record 19th time.

The Big Green was one of 13 teams from across the nation to earn an at-large berth following Friday’s regional meets. In all, 31 teams will be competing at nationals on Saturday, Nov. 19, at the LaVern Gibson Championship Course at Wabash Valley Family Sport Center located in Terre Haute, Ind. Of those 31 teams, 18 earned automatic berths by virtue of finishing either first or second at one of the nine respective regionals held across the country.

Dartmouth earned one of the 13 at-large bids thanks to a third-place finish Friday at Van Cortlandt Park in the Bronx at the Northeast Regional. Beating out Providence by a single point most likely helped the Green and White qualify as the highly ranked Friars pushed Dartmouth into the field.

“We are very excited to return to the NCAA championships,” says Barry Harwick ’77, the Marjorie and Herbert Chase ’30 Director of Track & Field and Cross Country. “It took a tremendous amount of hard work by the entire squad, particularly our five seniors, to earn the trip. We had our best race of the year at the regional meet and we look forward to carrying that momentum on to the nationals.”