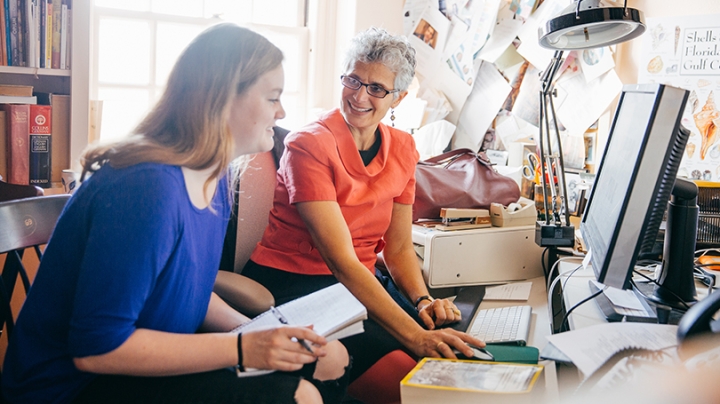 Early on in her Dartmouth experience, German studies major Veronica Williamson ’17 did a research internship that turned out to be less fulfilling than she had hoped. “I was sort of just drilling down into this dark hole in the internet, and I felt very isolated in that,” she says.

In her lecture Saturday, Professor Irene Kacandes will use a variety of historical examples to argue that it is not enough simply to say “never again” to the Holocaust and other traumatic events. (Photo by Robert Gill)

But Williamson didn’t lose her interest in research. Fortunately, she found a mentor in Irene Kacandes, the Dartmouth Professor of German Studies and Comparative Literature—and was able to contribute to a project that is making connections between history and urgent present-day events.

Kacandes, an expert on the Holocaust and traumatic memory, hired undergraduate research assistants, including Williamson, to help her prepare for an address she delivered in San Diego this fall at the 40th annual conference of the German Studies Association (GSA)—an interdisciplinary organization of international German-speaking scholars, for which Kacandes serves as president.

The theme of her talk: how to apply lessons from the Holocaust to the crises of the 21st century—including refugee resettlement in Europe.

Williamson says her research with Kacandes “was much more collaborative” than her first experience. “We were working toward a goal, and that made me like research. It changed my perspective of how I approach my own research projects, which has been very valuable.”

Kacandes will be giving a version of this lecture—“Seven Lessons I Learned from Studying the Holocaust and How They Can Help Us Cope with the Disgrace of Our Times”—at Dartmouth this weekend as the annual Zantop Memorial Lecture, given this year as part of a conference celebrating the 20th anniversary of Dartmouth’s comparative literature master’s program.

The talk, co-sponsored by the Leslie Center for the Humanities, starts at 6 p.m., Saturday, Nov. 5, in Moore Hall’s room B03, and is free and open to the public.

Kacandes will use a variety of historical examples to argue that it is not enough simply to say “never again” to the Holocaust and other traumatic events; we must actively use “post-memory,” she says, using a term coined by her colleague Marianne Hirsch to refer to how children of Holocaust survivors psychologically integrate their parents’ traumas—as Art Spiegelman famously attempts to do in his graphic novel Maus.

“One lesson is that we can post-remember, but it takes work,” Kacandes says. Part of that work can be accomplished by using objects as artifacts that transmit memory across generations. She tells the story of a grand piano bought by a German-Jewish musician in 1930. The pianist converted to Catholicism in 1933, but her German fiancé, under pressure from the Nazi party, broke off their engagement, and she was expelled from the German state music association and fled to South Africa, taking the piano with her. She kept her Jewish heritage secret for the rest of her life until her daughter, also a pianist, discovered documents that told the story and decided to return the piano to Berlin.

“I was able to find an image of the daughter playing the piano with the mother’s picture on it”—a photo Kacandes included in her presentation to the GSA, says Williamson. “That was really cool because it was such a tangible insight into how these objects are meaningful across time, even if they’ve had these crazy histories.”

Because objects can’t speak for themselves, Kacandes stresses that there is often a gap in post-memory. “There needs to be recognition that I am not the other person” who has experienced trauma, she says, “and I can’t be sure that the work I’ve done to understand their suffering equals historical reality.”

While those who have not directly suffered trauma cannot know exactly what victims and survivors experienced, the work of post-memory allows for empathy, and the possibility of what Kacandes calls “co-witnessing”—a key component, she says, of the ally movement in the U.S., which encourages bystanders not to be silent in the face of injustice. During the Holocaust, too many people “were too afraid to say anything about what was happening. I think we have to be careful that we don’t do the same thing,” Kacandes says.

This term, Williamson is doing an independent study in preparation for her senior thesis, comparing how the media referred to refugees and migrants in Europe after the fall of Berlin Wall and how they refer to them today. “Now I’m doing my own research and it’s like exploring,” she says.

Kacandes’ own experience of becoming a scholar shapes how she works with undergraduates like Williamson. “My first research-assistant job was a disaster,” she says. Her professor handed her a lengthy bibliography and told her to read it and report back. “I should have asked more questions, but her attitude was that I must know what to do. I didn’t—and she was dissatisfied and I found the experience very intimidating.”

Now, Kacandes says, she thinks of her students as apprentices. “I always say to my students, there’s no reason you should already know this. It’s OK to make mistakes—that’s how we learn.”

In a sense, the opportunity to deliver the Zantop lecture—named for Susanne Zantop, a professor of comparative literature and German studies who, with her husband, earth sciences professor Half Zantop, was murdered in 2001—is enacting the work of post-memory Kacandes will discuss in her talk on Saturday.

“It’s an opportunity to honor Susanne, who was an amazing colleague,” Kacandes says. “I feel honored to be able to give it.”