The engineering professor has won the Queen Elizabeth Prize for his camera-on-a-chip. 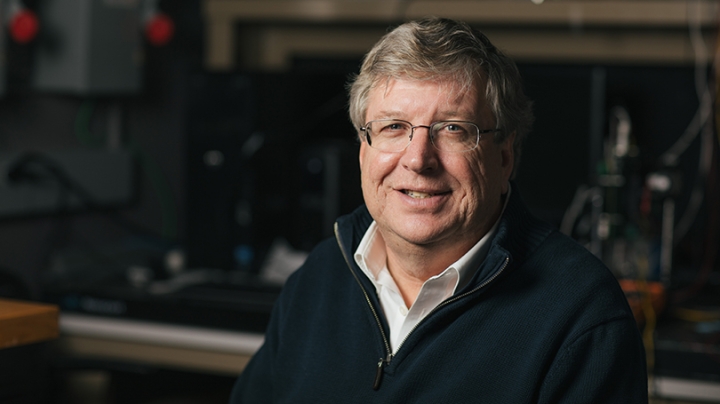 Thayer’s Eric Fossum has won the 2017 Queen Elizabeth Prize for Engineering for his invention of the CMOS image sensor, which revolutionized digital imaging. (Photo by Robert Gill)
1/31/2017
Body

Next time you take a selfie, thank Eric Fossum, inventor of the CMOS image sensor that makes it possible for a high-powered camera to fit inside your smart phone.

For that now-ubiquitous invention, Fossum—a professor at Thayer School of Engineering, director of Thayer’s PhD innovation program, and associate provost for entrepreneurship and technology transfer—has been awarded the largest international prize in his field, the Queen Elizabeth Prize for Engineering.

“The Queen Elizabeth Prize honors individuals whose innovations have quite literally changed the world, and that is exactly what Eric Fossum has done,” says President Phil Hanlon ’77. “His CMOS image sensor has brought us everything from medical advances to pictures from Mars to cameras in our pockets. And he continues to innovate here at Dartmouth, where he is committed to teaching the next generation of engineers. This is a proud moment for the entire Dartmouth community.”

Fossum will share the 1 million-pound prize with three others: Nobukazu Teranishi, a research professor at University of Hyogo and Shizuoka University, Japan, who developed the pinned photodiode (PPD), a device incorporated into most CMOS image sensors; and retired Bell Lab scientists Michael Tompsett and George Smith, who were among the inventors of the CCD image sensor that preceded CMOS. (In 2009, Smith shared the Nobel Prize for physics with the late William Boyd, also of Bell Labs.)

“This prize really honors a string of inventors and engineers, and we stand on the shoulders of the giants who came before us,” Fossum says.

“I can’t imagine anyone more deserving of this honor, in many ways the engineering equivalent of the Nobel Prize,” says Joseph Helble, dean of Thayer. “Eric brings inspiration to our campus, teaches students to use creativity to solve global problems, and mentors students in his lab—all contributing to the development of the future innovators of our country.”

“Eric is a tremendous colleague—a researcher at the top of his field who at the same time is deeply committed to teaching and sharing his expertise with students and faculty. In his new role leading our entrepreneurial and tech transfer efforts, Eric will be paying his remarkable experience forward on behalf of Dartmouth’s faculty and students,” says Provost Carolyn Dever. “It is thrilling to see his achievements recognized internationally and at the highest level.”

A Camera on a Chip

The complementary metal-oxide-semiconductor, or CMOS (pronounced “see-moss”) image sensor wasn’t originally developed to proliferate selfies. In the early 1990s, when Fossum worked at NASA’s Jet Propulsion Laboratory (JPL), the challenge was to put a camera in space.

The charge-coupled device, or CCD, technology then in use was too large, used too much power, and was too susceptible to damage from radiation. It required specially fabricated electronics that were hard to integrate with other components, and relied on a clumsy “bucket-brigade operation” to relay information, Fossum says.

The breakthrough of the CMOS image sensor was that it could measure light where it landed. “If we don’t need to do the big bucket brigade, that means we don’t have to use that specialized CCD fabrication process, and we can integrate all the electronics on the same chip using a mainstream consumer electronics technology,” Fossum says. “The trick was figuring out how to make that measuring stick inside the pixel itself. Once we were able to do that, we were able to integrate everything on the chip fairly readily, and the rest is history.”

Or almost. The next challenge was convincing businesses of the commercial applications. “The initial chips didn’t have the same quality of performance as CCDs,” says Fossum, “so the motivation to change was not compelling. People wanted to keep working with the thing they knew.” Fossum left JPL to launch a startup, Photobit, to produce the new technology for digital cameras and laptops. But it wasn’t until the advent of cell phones in the early 2000s that the CMOS sensors went mainstream.

“As I teach my students at Thayer, having a good idea that’s slightly better than existing technology usually is not enough,” Fossum says. “You have to have something that is better in a very compelling way before it can displace an incumbent technology.”

Fossum sold Photobit and retired—for the first time—in 2001. But a few years later he launched another successful company, Siimpel, which made auto-focus systems for cell phone cameras. He retired again in 2010, and moved to New Hampshire.

“I have to say retirement was great—I got to do all the things I always wanted to do,” he says. “And then when I got down to the bottom of my bucket list, I started to wonder, what is the best thing to do with the rest of my life? I decided to try to give back. I knew from experience that academic life could offer that, teaching the next generation of students and passing that knowledge on.”

He approached Helble, offering to teach a course or two at Thayer. “I became happily reengaged with the process of educating students,” he says. “Now it’s become a more than a full-time job, with a full teaching load and a full research load and administrative duties.”

Fossum has not stopped innovating. With graduate students in his lab at Thayer, he is developing pixels for the new Quanta image sensor, which counts individual photons as they hit the sensor chip. The technology “should open up new areas for scientific imaging and defense applications, and it may find its way to consumer electronics down the road,” he says. The idea “was completely unexpected for me, and has been tremendously exciting and motivating.”

Of the impact of the CMOS image sensor, he says, “When you’re sitting in your armchair daydreaming about why the technology you’ve invented is going to be everywhere, you have to realize that you could just be daydreaming. So I always maintained this sense of disbelief that it would actually work out. But now when I travel around the world to cities, national parks, or attend a conference, or look at Facebook and see everyone using this technology, it’s really just incredible that it actually all worked.”

Awarded every two years, the Queen Elizabeth Prize for Engineering is “an international £1 million prize that celebrates engineers responsible for an innovation that has been of global benefit to humanity,” according to the foundation’s website.

The first prize was awarded in 2013 to Robert Kahn, Vinton Cerf, and Louis Pouzin, who developed the foundational architecture of the internet, and Tim Berners-Lee and Marc Andreessen, who made the Web accessible. In 2015, Robert Langer won the prize for engineering polymers that have revolutionized the delivery of drugs that treat major diseases.

In the coming year, Fossum says, he will have the opportunity to go to Buckingham Palace to receive the prize trophy from Queen Elizabeth II herself. “That’s pretty exciting,” he says.