Each term, the public competition for entrepreneurs offers cash prizes and technical assistance. 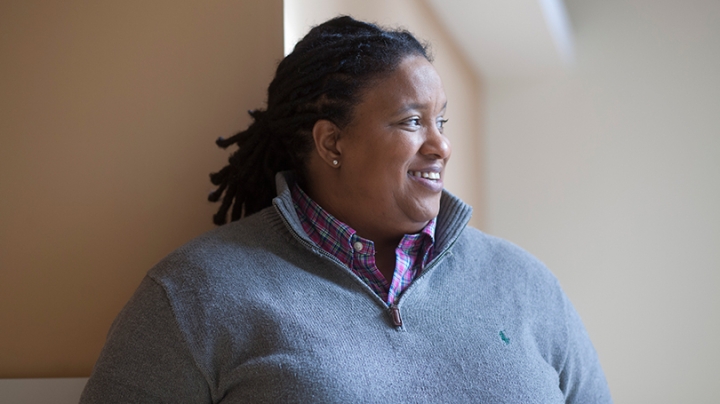 Pitch winner Dia Draper, director of strategic initiatives for the MBA Program at the Tuck School of Business, created her product to help people who, like her, have survived cancer. (Photo courtesy of Dia Draper)
3/15/2017
Body

Two top winners at this winter’s The Pitch, Dartmouth’s competition for aspiring entrepreneurs, are aiming to solve starkly different problems. One is developing a customized gift basket for people battling cancer, and another is inventing a machine that improves turf on athletic fields.

Co-sponsored by The DEN, The Dartmouth Entrepreneurial Network, and DALI, the Digital Arts, Leadership, and Innovation Lab, The Pitch is a public forum where inventors—students, faculty, and staff— make two-minute pitches for products they want to bring to market. DALI winners get technical assistance with software and websites. DEN’s first prize is $2,000, and second is $1,500. The People’s Choice winner, selected by the audience, gets $1,000.

DEN’s first prize this year went to Dia Draper, director of strategic initiatives for the MBA Program at the Tuck School of Business, who has started a gift basket company.  Second prize went to Michael Wade, a Dartmouth staffer who’s inventing a machine to improve turf on athletic fields.

Draper created her product to help people who, like her, have survived cancer. “In August 2011, I was diagnosed with late-stage colon cancer,” she explains. “During my treatment, I received over 300 pieces of mail, goodies, and gifts.” As she was recovering, Draper’s friends asked her to help them figure out what to send to other people battling cancer.

“Speaking just for myself,” Draper says, “I didn’t want something all tied up in a ribbon. That just reminded me that I was sick. I didn’t need anything to tell me that I was in a fight for my life. I was terrified. So this box, if you get it, doesn’t scream, ‘You’re sick.’”

Instead, she says, a thoughtful care package should overflow with fun but practical items to make hospital rooms more livable, and to help cope with the side effects of chemotherapy and radiation, such as dehydration, nausea, and nerve problems. Possible gifts include colorful, soft blankets and towels; ginger candies to settle uneasy stomachs; a plastic-clad, glass-lined water bottle that’s easy for a nerve-damaged hand to hold; card games; adult coloring books; and a box of Red Kite Candy, made by a local company that is owned by a cancer survivor.

“This basket is for survivors by survivors,” says Draper. She says she and her partner will use the $2,000 Pitch award to start building an e-commerce system—“We’re just selling these through word of mouth right now”—and pay for professional product photography. She’s grateful to The DEN for offering a pre-contest clinic to help contestants prepare to win over the judges. “You really learn to tell your story well in two minutes,” she says.

Michael Wade says he also benefited from DEN’s help with his product pitch. He’s developing a new and improved way to aerate turf on athletic fields—which happens to be part of his grounds-keeping job at Dartmouth. Equipment currently in use penetrates the soil vertically. But Wade wants to build a machine that slices into the soil horizontally, which, he speculates, would allow more water and nutrients to reach the roots of grass, over larger areas.

He made this discovery somewhat by accident.

“I had used a sod cutter to cut a whole bunch of sod on the side of a field, about an inch thick, and didn’t end up using all of it,” he recalls. “I left the sod where it was, and three days later, we needed sod. When I tried to pull the grass up it had started to re-root. The roots were really healthy and phenomenal looking.”

Wade, who has a bachelor’s degree in plant and soil science, will use the cash prize to buy materials for a prototype, and test it. He says DEN helped him get a provisional patent, so he could unveil his idea in public without fear of being copied. As a staff member, he says he was amazed to be a winner.

“We were going up against arguably some of the smartest students in the country,” he says.

Dartmouth students also did well at The Pitch. The People’s Choice award went to Shawn Li, Tuck ’18, whose team is developing a home health monitoring system for people with heart disease.

One DALI award went to Nathan Yu ’19, for AlertDrive, a system of fatigue sensors and mechanisms that alerts drivers when they get drowsy. Another went to a team including Charlotte Blanc ’17, Angela Zhu ’17, Byrne Hollander ’17, Peter Loomis ’17, Mark Erwin ’17, and Wesley Thompson ’17. They created a tool called Notist that lets people annotate Internet sites and share them in groups or keep them in personal notebooks.