Dartmouth’s Yenching Scholars to Study in China Next Year 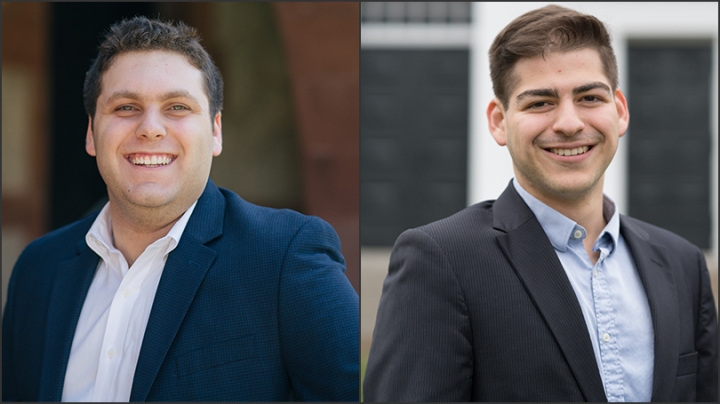 “I want to pursue a career in U.S. national security and foreign policy with an East Asia focus,” says Josh Tupler ’16, left. José Burnes Garza ’17, right, says the chance to study in China is “a great gateway for me to work on international affairs and diplomacy.” (Photos by Robert Gill and Eli Burakian ’00)
4/06/2017
Body

A Dartmouth student and a recent alumnus have been selected as Yenching Scholars. Josh Tupler ’16 and José Burnes Garza ’17 will join the third cohort of exceptional students from around the world in a yearlong master’s of China studies program at Yenching Academy of Peking University in Beijing.

The highly competitive English-language program combines humanities and social sciences “to incorporate the diverse backgrounds and experiences of program participants into the study of ancient, modern, and contemporary China, effectively acting as an incubator for innovative approaches to past, present, and future Chinese transformations,” notes the Yenching Academy website. The program began in 2015.

“I’m delighted that José and Josh’s accomplishments and interests have been recognized in this way,” says Jessica Smolin, assistant dean for scholarship advising. “There are a growing number of opportunities for postgraduate study in China, and Dartmouth students are well prepared to take advantage of them.”

For more information about applying for the Yenching Scholarship and other international and national programs, visit Dartmouth’s National Scholarships/Fellowships website.

“I’ve always been interested in traveling and in diplomatic work, and going to China will give me the opportunity to delve deeper into understanding China’s economic development policies, especially towards Latin America,” says José Burnes Garza, a government major from Monterrey, Mexico.

As a participant in the government department’s off-campus program in Washington, D.C., Burnes Garza interned at the Council of the Americas. Through funding from the John Sloan Dickey Center for International Understanding, he spent last summer interning at the Organization of American States, where he worked on labor and employment policy and assisted with an inter-American ministerial conference on labor. “I got to experience what diplomacy looks like firsthand,” he says. “Seeing how countries negotiate was amazing.”

More recently, with funding from the Nelson A. Rockefeller Center for Public Policy and the office of Undergraduate Advising and Research, he traveled to Mexico City and Guatemala to sit in on special sessions of the Inter-American Court of Human Rights and conduct interviews for his thesis, which focuses on how the court is affecting human rights practices in Mexico. He also participated in the French language study abroad program in Lyon, works as a Spanish drill instructor for the Department of Spanish and Portuguese, and has served a research assistant for three members of the government department.

“Being selected as a Yenching Scholar is a great honor and a great opportunity, and will give José the chance to strengthen the already impressive social science skills he has learned here at Dartmouth,” says Professor of Government Lisa Baldez, who is Burnes Garza’s major adviser. “I’m delighted that José will be representing Dartmouth at Peking University next year.”

Burnes Garza took “Acting 1” with James Rice, a senior lecturer in the theater department. “I had never done theater before,” he says, but he enjoyed it enough to take two other acting classes, perform in two productions with the Displaced Theater Company, and deliver a monologue on Latino masculinity at a recent Upstaging Stereotypes event. Performance has helped him discover his own voice, he says. “It’s been a hugely influential part of my life.”

Burnes Garza has also been deeply involved in the Dartmouth community. He is founder and former president of the Dartmouth Latin American Student Association, a social hub and academic forum for students from Latin America and others interested in the region. In his house community, Allen House, he serves as external relations coordinator and member of the leadership council, and coordinates the Allen House Professional Fellows Program, a pilot project that matches students with mentors from Dartmouth’s Osher Lifelong Learning Institute. He also serves on the Guarini Institute Off-Campus Programs Student Advisory Board and on the Center for Service’s Social Impact Design Committee, which is developing a program for first-year students interested in social service and community engagement work.

Of receiving the Yenching Scholarship, Burnes Garza says, “I’m very excited, because this is a great gateway for me to work on international affairs and diplomacy.”

“Through my Fulbright experience I’ve learned the importance of understanding history and culture, and having perspective and dialogue,” he says—an understanding he hopes to gain in China next year.

The Yenching Scholarship will help him shift his focus from military strategy to diplomacy, he says. “I’m especially excited to learn about Chinese history, culture, foreign policy, and philosophy at one of the most prestigious schools in China,” he says. “Such study is tremendously valuable for me because I want to pursue a career in U.S. national security and foreign policy with an East Asia focus. That background in history and culture is key to understanding and to being able to find areas for mutual cooperation.”

Tupler’s interest in China began in a course with Associate Professor of Government Jennifer Lind. As a presidential scholar, he worked with Lind as a research assistant, studying crisis management in U.S.-China relations. His honors thesis on U.S. power projection and military capabilities over Taiwan and the South China Sea, which he worked on with Associate Professor Daryl Press, won the Nelson A. Rockefeller Memorial Prize and Fellowship, the government department’s highest undergraduate award to encourage publication.

At Dartmouth, he says, “the small class size and the direct interaction with and accessibility of professors let you actually build a genuine and meaningful relationship with professors in a way that I couldn’t even imagine before I came. I’m immensely grateful for that.”

Tupler participated in the Management in Leadership Development program and the Global Leadership program offered through the Nelson A. Rockefeller Center for Public Policy, served as a student ambassador for the Dartmouth Ethics Institute, was president of Dartmouth Students for Israel, and treasurer of Kappa Kappa Kappa fraternity. He also founded the Dartmouth chapter of Physicians for Social Responsibility and serves on that organization’s national board of directors.

In addition, he spent a term as an intern at the U.S. House of Representatives, completed internships with Morgan Stanley and Bridgewater Associates, was a fellow for the Carnegie Council for Ethics in International Affairs, and traveled to London on the government department’s foreign study program. He also fenced and played rugby and Ultimate Frisbee with club teams.

Tupler says he is grateful for the assistance the scholarship advising office has given him as he has applied for both the Fulbright and the Yenching Scholarship. “Dr. Smolin in particular has been tremendously helpful in the application process, and I want to say thank you to her and all the other excellent resources Dartmouth provides.”