The course explores the work of “the great freedom fighter of the 20th century.” 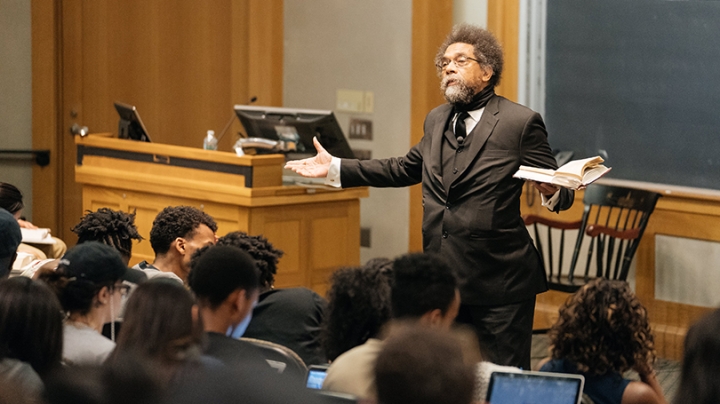 “I’ve never taught a summer school in my life. I want to thank you all for allowing me to do something new,” Cornel West told the class. (Photo by Eli Burakian ’00)
7/26/2017
Body

Cornel West walked down the aisle of Filene Auditorium for the first session of his summer-term course, “The Historical Philosophy of W.E.B. Du Bois,” shaking hands with everyone he passed and looking every bit himself in what he once described to The New York Times as his “cemetery clothes.” (“I drop dead, I am coffin-ready. I got my tie, my white shirt, everything. Just fix my Afro nice in the coffin.”)

“I want to express my gratitude to each and every one of you for your willingness to spend this summer with each other reading W.E.B Du Bois, on this magnificent campus in the summertime,” he said in welcome to more than 160 students and auditors. “I’ve never taught a summer school in my life. I want to thank you all for allowing me to do something new.”

From there, the famous activist, social critic, and professor of the practice of public philosophy at Harvard Divinity School held forth for nearly three hours, tracing Du Bois’ intellectual influences from ancient Athens and Jerusalem to the German modernist philosophers of the 19th century and African American traditions shaped by the catastrophic traumas of slavery and systematic racism.

Three hours is a long time for a lecture, but it’s hard to imagine anyone sleeping through West’s disquisition, which featured, amid a growing chalkboard web of thematic connections, asides about Beyoncé and Kendrick Lamar; impressions of Malcolm X, Martin Luther King Jr., and Fanny Lou Hamer; and a respectable basso rendition of a few bars of “Nobody Knows the Trouble I’ve Seen.”

“We want to try to constitute a seminar-like spirit in terms of give and take, our call and response,” West said.

“I don’t think I’ve laughed this much throughout a class or thought so deeply about things,” said Erika Johnson ’17, who is finishing up her undergraduate requirements this summer. “Given that Dartmouth was able to get Cornel West for the summer, it’s worth staying an extra term.”

West described Du Bois—a co-founder of the NAACP and the first African American to earn a Harvard PhD—as an “intellectual giant and spiritual titan and freedom fighter” whose efforts to bring the experience of African Americans to the moral and intellectual attention of a society set on dehumanizing them spanned more than half the 20th century. Du Bois lived from 1868 to 1963.

At the center of Du Bois’ worldview was the ancient Greek concept of paideia—deep, transformative education characterized by self-interrogation and fearless speech, West said. “The formation of attention. Attending to the things that matter. Life and death and joy and sorrow and friendship.”

Du Bois, he said, “wants to exemplify paideia. And that’s part of what we want to do in this class—in our own lives.”

Trained as a sociologist, Du Bois, who was raised in the predominantly white town of Great Barrington, Mass., pursued his education first at the historically black Fisk University, then at Harvard, then at the University of Berlin. “There is no one who can claim to be more cosmopolitan in the 20th century,” West said.

The two seminal Du Bois works around which the course is organized, The Souls of Black Folk and Dusk of Dawn, were written 37 years apart, in 1903 and 1940, respectively, and reflect, West said, the rigorous application of paideia to Du Bois’ own thinking. “By 1940, Du Bois has gone through some very deep changes,” he said. “He gets more and more radical as he gets older. Usually it’s the opposite way, isn’t it?”

During the class session, students asked questions that ranged from how Du Bois reconciled his admiration for Charles Darwin with the destructive way Social Darwinists had applied his ideas (“what Du Bois is saying is you cannot have a commitment to paideia unless you are conversant with some of the most challenging theories of the day”) to what Du Bois might think of our contemporary discourse on race (“It’s a big leap from 1903 to 2017 in terms of the ways in which black people, white people, and others interact, class-wise, geographically-wise, and what have you”).

Afterward, West stayed to talk with more than a dozen students. Throughout the term, he will be offering office hours by appointment, and meeting with students formally and informally. James Dobson, a lecturer in the English department and for the Masters of Arts in Liberal Studies program, and Chante Kinyon, a lecturer in African and African American studies, are serving as teaching assistants for the course.

Celeste Kearney ’19 says West’s presence at Dartmouth “blows my mind. The fact that he’s here teaching a course and holding office hours and talking to students after class and just trying to be engaged—like the way at the beginning of class he was shaking hands with students around the room to kind of break that barrier, even though it’s such a large lecture class—it says a lot about his character.”

Camilo Toruno ’20 called the opportunity to take a course with West “inspirational.”

“I’m not a humanities major—I want to study bioengineering—but I think there’s something that transcends any one academic discipline,” Toruno said. “When you’re around someone who excels in their field, you can learn a lot about how they approach issues and embrace complexity. That’s impressive. I’m just really excited to be in this class.”

Torrance Johnson ’19 said he’s glad to be able to get philosophy credit for the course, which is also cross-listed in English and African and African American studies. “I’ve always been interested in Cornel West’s philosophy, and also the philosophy of W.E.B. Du Bois. I’m a philosophy major, so I was very happy to be able to take the course and be able to focus on a specific area of study within my major.”

West has spoken at Dartmouth twice in the past, most recently this spring as part of the lecture series “Why the Humanities Matter in the 21st Century.”