Changes Are Coming to the College’s Meal Plan Options

The goal is to make dining more flexible. 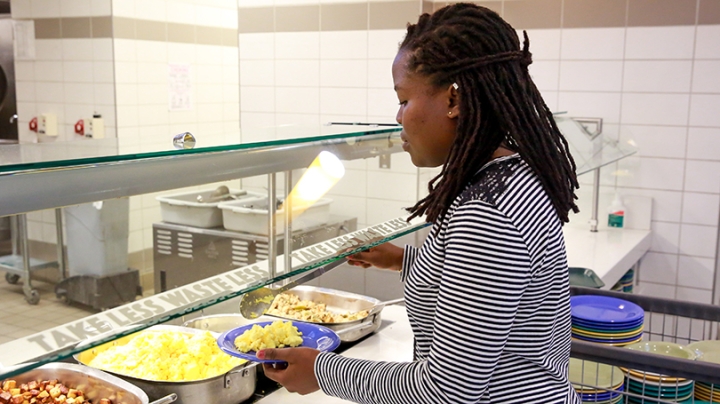 Jon Plodzik, who took the helm of Dartmouth Dining Services a little over a year ago, thinks a meal plan should be kind of like a gym membership. “You can use it whenever you want, and the more you use it, the more you get out of it.”

Dartmouth, he says, is moving toward that goal: a universal access meal card, which would allow the holder to eat at the Class of 1953 Commons just about any time.

“If all goes as planned,” Plodzik says, biting into a freshly made burrito at ’53 Commons, “our first step in that direction will be what we call an ‘All Access’ Plan. Next fall, it will replace what is now the Smart Choice 20 and offer more value for the same amount of money.”

The new plan would feature a meal at four periods—breakfast, lunch, dinner, and nighttime—the equivalent of 28 per week (instead of the current 20 meals). Instead of the usual $200 deposited by the College in the declining balance account (DBA), which supplements the meal card, there would be $250.

Why add meals and cash to the card? Plodzik want to reduce dependence on retail venues like Collis and the Courtyard Café, which can drain students’ DBA. “They were designed just to grab a sandwich or salad on the go, not for whole meals. But students tell me they go there when they have run out of swipes on their meal card. Or they run into friends and want to join them, but have already eaten their allotted meal at ’53 Commons.” Too often, Plodzik says, even before the end of the term, the DBA card is maxed out. “We want dining at Dartmouth to be a lot more flexible, so whenever you are hungry, you can use your card to eat pretty much what you want, when you want.”

In case you’re wondering if that would cause students to eat too much, Plodzik says, in schools with universal access food cards, the opposite is true. “If you know you can eat at just about any time,” he says, “you’re not as likely to overfill your plate at any one meal.”

The goal behind all these changes, says Plodzik, is to move away from plans that charge per meal, and to make ’53 Commons a gathering place, not just three times a day, but all day long, for fellowship.

“For breakfast, there’s a new scrambled egg bar, and, on Fridays, a brownie bar with toppings, and Wednesday nights now feature rotisserie chicken.

Plodzik wants to make sure that Dartmouth’s food is culturally inclusive. “We already have Kosher and Halal items, and we hope to set up a special Halal station before Ramadan,” he says.

On the second floor of ’53 Commons, there’s a TV lounge—new soft chairs are on the way. Plans for improving the ambience in the dining hall may also include different table arrangements and student art on the walls. “We see mealtimes—even in-between meal times—as great chances to build community on campus,” says Plodzik. Students perform live music most Friday nights.”

Plodzik came to Dartmouth from the dining service at the University of New Hampshire, where introducing an unlimited access meal plan was a success, he says. “It’s very important that all students, whatever their financial circumstances, have enough to eat and never feel short on cash to pay for it.”

The ultimate way to achieve that goal, in Plodzik’s view, is to remove meal periods all together, replacing cards allowing a limited number of swipes with biometric recognition. By the fall of 2019, he hopes that meal plan subscribers will check themselves in at the door by waving their hands in front of a scanner.

“Dartmouth has a great program,” says Plodzik, “but my job is to make it better. We will build on tradition, but I am also determined to tear down barriers of access to good food.”