The sophomore has received a Newman Civic Fellowship to advance social justice work. 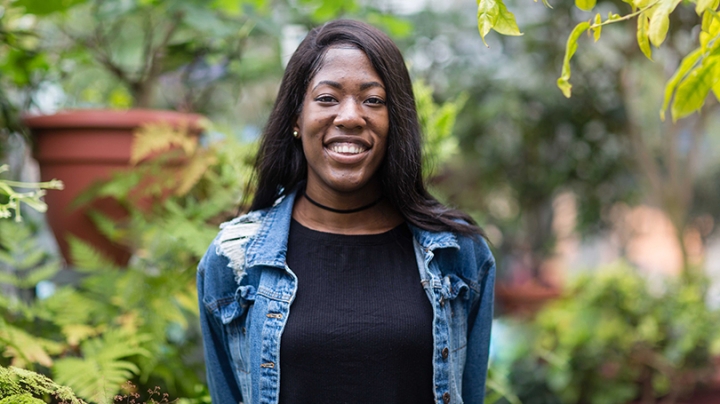 Sabyne Pierre ’20 has been awarded a 2018 Newman Civic Fellowship, which will provide her with training and resources to advance social change. (Photo by Kevin Yang ’20)
4/18/2018
Body

Sabyne Pierre ’20 has been awarded a 2018 Newman Civic Fellowship by Campus Compact, which will provide her with training and resources to advance social change.

She is already immersed in that kind of work at Dartmouth, both on and off campus. Through Summer Enrichment at Dartmouth (SEAD), Pierre mentored 10 high school students at the Bronx School of Science and Mathematics, whose administrators describe her as “a bundle of intellectual energy.” Through Dartmouth’s Center for Social Impact, Pierre interned with Lava Mae, a nonprofit organization in San Francisco that provides mobile showers to the homeless population.

“They renovate trucks and retrofit them with showers,” she says. “It’s such a simple idea, and it dignifies people.”

Pierre says her mother taught all her children to share what little they had with others in need. “My mother was a hard worker,” she says, “raising six children on her own. She held down three jobs, but still, sometimes we couldn’t afford food, and we relied on a food pantry. That’s why, whenever I can, I volunteer in food pantries.”

When Haiti was struck by an earthquake in 2010, Pierre’s mother took her and her brother to the island nation to help people in crisis. “Our family came from Haiti,” she says, “and my mother wanted us to see what had happened to their home, so we would know how lucky we were to have a place to live in Newark, N.J. We filled huge containers with items from our local food pantry, and from our home, and we spent the summer just giving things out. My mother was huge on giving back, and would literally give the clothes off her back to someone else who needed them more.”

Her mother died when Pierre was a sophomore in high school. She wants to honor her memory by making the most of her Dartmouth education and the Newman fellowship.

“I think the fellowship will help me internalize my accomplishments,” she says. “Sometimes I worry that I am not doing enough, or didn’t get something right, but my mentors at OPAL (Office of Pluralism and Leadership) want me to focus more on the fact that someone has given me an award, and that I should accept the opportunity to do something with it.”

“Sabyne has a remarkable, effervescent energy, deep compassion for others, an insatiable curiosity, and a conviction that she will leave things—and people—better than she found them,” says Davis.

“She combines ebullience with seriousness of purpose—a rare and powerful mixture. Our community is fortunate to have her special blend of empathy, creativity, and fierce commitment to issues of social justice.”

Description
The Dodecaphonics, Dartmouth’s oldest coed a cappella group, sing part of the Alma Mater on the Green for a segment on the return of tourists and students to New Hampshire.
Logo
Image