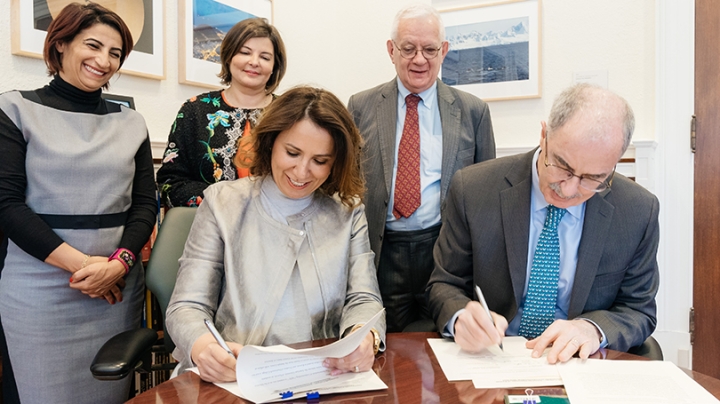 Sheikha Dana Nasser Sabah Al Ahmed Al Sabah, chair of the AUK board of trustees, and President Phil Hanlon ’77 sign a new MOU as, from left, Amal Albinali of AUK; Aseel al-Awadhi of the Kuwaiti Embassy; and Dale Eickelman ’64, look on. (Photo by Eli Burakian ’00)
5/08/2018
Body

Leaders from Dartmouth and the American University of Kuwait (AUK), the Gulf nation’s first and only liberal arts university, met at the College last month to extend their institutional partnership for another five years with an agreement that deepens and expands the academic experience on both campuses.

Sheikha Dana Nasser Sabah Al Ahmed Al Sabah, the founder and chair of the board of trustees of AUK, signed a memorandum of understanding with Dartmouth in an April 23 ceremony hosted by President Phil Hanlon ’77. It was the fourth such agreement between the College and AUK, which has had a 15-year partnership.

Amal Albinali, vice president for admissions and public affairs at AUK, and Aseel al-Awadhi, director of the Kuwait Cultural Office of the Kuwaiti Embassy in Washington, D.C. and one of the first women elected to Kuwait’s parliament, participated in the ceremony.

“We recognize that the young people at our institutions—the world’s future leaders—face unprecedented challenges and unlimited opportunities,” said Hanlon. “The liberal arts training they receive at Dartmouth and at AUK will prepare them to meet those challenges and boldly pursue those opportunities as they work to advance knowledge for the betterment of humankind.”

Established in 2003 as an independent, private, coeducational institution, AUK offers a liberal arts education based on an American model developed as a result of AUK’s long-standing collaboration with Dartmouth.

“We are really proud to be associated with Dartmouth and honored to have your commitment to our growing liberal arts university halfway across the globe,” said Al Sabah. “Our biggest challenge is to lead and not to follow as we adapt to the inevitable changes in our societies.”

In the 15-year partnership between the two institutions, Dartmouth has provided advice on curriculum planning, faculty hiring, and research collaboration, said Al Sabah, who was awarded an honorary doctor of humane letters degree from Dartmouth in 2017 in recognition of her commitment to liberal arts education.

“We look forward to continuing our cooperation with Dartmouth, a partner in our evolution and in our ongoing efforts to establish a liberal arts culture in Kuwait’s higher education. Dartmouth has educated us and has educated our community in the meaning of the liberal arts,” she said.

Hanlon and Al Sabah acknowledged Dale Eickelman ’64, the Ralph and Richard Lazarus Professor of Anthropology and Human Relations emeritus, as the driving force in establishing the partnership. Eickelman participated in the ceremony as the relationship coordinator of the Dartmouth-AUK partnership, a position he has held since the program’s start in 2003.

“I want to extend my special thanks to Dale Eickelman for his 15 years of collaboration in developing the partnership,” Al Sabah said. “His insight into our reciprocal complex cultures has been instrumental in creating a common ground on which we’ve shared our liberal arts vision and built our partnership.”

In the last decade and a half, Dartmouth and AUK faculty and students have traveled between campuses to participate in cross-cultural internships, fellowships, and research. Dartmouth and AUK are now developing a for-credit academic exchange to complement the existing non-credit, experiential learning internship, says Eickelman.

Before the signing ceremony in the president’s office, Al Sabah and the AUK delegation met with Daniel Benjamin, the Norman E. McCulloch Jr. Director of the John Sloan Dickey Center for International Understanding, and Dickey program directors to discuss collaborative opportunities, including the development of a Center for Gulf Studies.