“You try to live your life to be an example,” says the author and social activist. 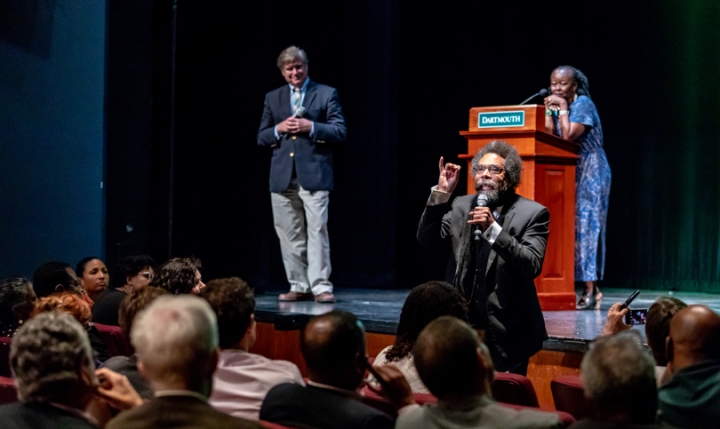 Over the weekend, more than 20 scholars from all over the country gathered at Dartmouth to exchange ideas about the past and future of race relations in America. The conference, Race Matters @ 25, celebrated the groundbreaking 1993 book Race Matters, by Cornel West, Professor of the Practice of Public Philosophy at Harvard and a Montgomery fellow who has taught at the College.

West’s searing analysis of the color line in American history and culture has just been published in a 25th-anniversary edition.

“We live in one of the darkest moments in American history—a bleak time of spiritual blackout and imperial meltdown,” writes West in his new introduction.

“Spiritual blackout—what a phrase,” Barbara Will, associate dean of Arts and Humanities and the A. and R. Newbury Professor of English, said as she opened the conference Friday evening in Moore Theater in the Hopkins Center for the Arts. “It’s balanced only by the continued hope and belief that we’re stronger when we recognize our commonality across differences.”

The conference audience included Dartmouth faculty, staff, and students, attendees from other colleges and universities, and members of the public.

In her keynote address, Farah Jasmine Griffin, the William B. Ransford Professor of English and Comparative Literature and African-American Studies at Columbia University, set in motion a pendulum that would swing, throughout the weekend, between despair and hope.

“Every day there’s some new outrage either to keep us on edge or numb us. The television, which in a rush for ratings and profit helped to create this moment, keeps us captive with daily reports of new outrages: images of babies torn from their mothers, families separated, entire countries banned, white supremacists marching through the streets.”

But, Griffin said, citing passages from West’s writings, “to think about Cornel is to be brought back from the brink of despair.”

Later, at a roundtable discussion, Reggie Williams ’76, a former linebacker for the Cincinnati Bengals, told his own story of resilience. Williams has endured racism in the locker room, serious knee injuries, and a life-threatening stroke. Devastated and speechless after the stroke, he regained his voice by reciting, in the hospital, William Ernest Henley’s “Invictus,” a poem he memorized as a student at Dartmouth. He recited it again for the audience, getting a round of applause after the final lines, “I am the master of my fate/I am the captain of my soul.

Scholarly presentations often prompted challenging responses. “My question concerns black solidarity,” Chris Rowan ’19 said to Tommie Shelby, the Caldwell Titcomb Professor of African and African American Studies and of Philosophy at Harvard. “The economic prosperity of the black elite is dependent on capitalism, which necessitates the exploitation of low-income black people. What is your analysis of how to move forward in building black solidarity, being conscious of the fact that the elite class—yes, they’re black—depends for their very existence on the exploitation of those at the bottom?”

Shelby answered, “Even though social standing and incomes do depend on features of the status quo, under the right conditions they have to be willing to sacrifice something to bring about something more just. I wouldn’t want to write people off simply because they have a stake in the status quo. And alliances can shift.”

“No matter how bleak and dark things are, you ought to expect the darkness and bleakness because that’s the kind of human beings we are,” said West in his closing remarks. “But we always have the capacity to spread some form of steadfast love, some form of lovingkindness to the vulnerable, and do it in such a way that we still can have smiles on our faces.” 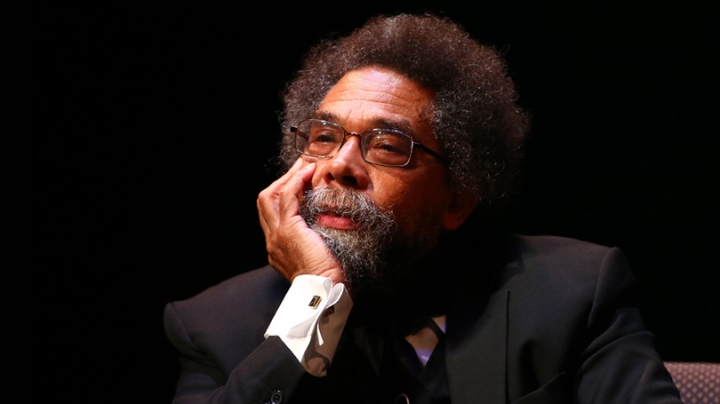 Cornel West has taught at Dartmouth as a Montgomery Fellow. (Photo by Herb Swanson)

Will and the other organizers of the conference are already discussing where the community can go from here. “After such a successful conference, we are eager to harness the energy and good will to develop further initiatives and deepen the dialogue on campus around race and inclusion,” says Will.