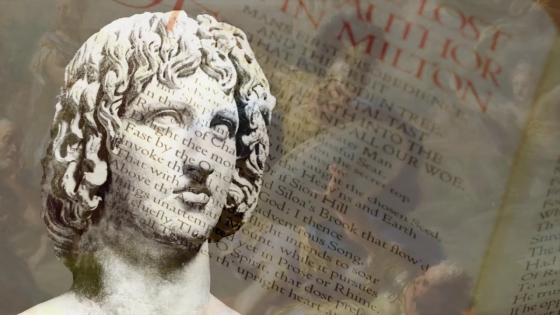 In “John Milton: Paradise Lost”—Dartmouth’s newest massive open online course, or MOOC—participants are taking a deep dive into one of the seminal works of English literature: Milton’s 17th-century blank verse epic, in which the poet chronicles the expulsion of Adam and Eve from Eden and promises, along the way, to “justifie the wayes of God to men.”

Led by Milton expert and Professor of English Thomas Luxon, the course is the most recent addition to DartmouthX, a growing collection of MOOCs that Dartmouth has been creating since 2014 in partnership with the nonprofit online learning consortium edX.

It’s also the natural extension of the John Milton Reading Room, an online project Luxon began more than 20 years ago with the goal of making Milton’s writings—and the scholarly conversation around them—accessible to a wider audience.

In 2014, the Milton Reading Room was redesigned by students and staff at Dartmouth’s Digital Arts Leadership and Innovation Lab (DALI). Now visitors can find the bulk of Milton’s prolific writings: all of his verse in four languages, prose selections, and scholarly annotations.

Still, Luxon says, the text of Paradise Lost is challenging to navigate independently. “The Milton Reading Room attracts between 8,000 and 12,000 users a month, from more than 90 countries. It occurred to me that some of those users—those not using it for a course, for example—might like a little professional help with their reading and study.” Through the MOOC, he hopes to provide just that.

Why study a 350-year-old poem in the 21st century? Luxon hopes readers will find Milton’s work relevant to the political culture of our time.

“Milton was one of the pioneers of liberal republicanism in early modern England,” he says. “By republicanism here I mean government without a monarch. By liberal, I mean broadly informed. Today we may be witnessing the end of the era that he helped begin. And it is possible to detect the seeds of the republic’s demise in Milton’s own pioneering work.”

The four-week online course is self-paced; students may enroll and join the conversation at any time. Through reading the text, viewing Luxon’s short video lectures, and using online social-annotation tools, participants will create a community of learners around Paradise Lost, working directly on the reading room website.

Instructional designer Michael Goudzwaard collaborated with Luxon to implement the interactive platform, which lets readers highlight text sections and share their own commentary and discussion questions. The approach of integrating student discussion within the online text grew out of Goudzwaard’s experience developing an earlier literary DartmouthX course—The American Renaissance: Classic Literature of the 19th Century, co-taught by Donald Pease and James Dobson. In that course, Goudzwaard says, “we found that learners engaged differently and more deeply within the text than if the discussion took place solely in separate discussion forums.”

Luxon hopes the course will help participants increase their enjoyment and understanding of Paradise Lost, and he’s also excited about giving them the opportunity to contribute to the Milton Reading Room. “I hope that some of the annotations people make during the course will be useful as permanent additions to the site,” he says. “For me, this is an experiment in crowd-sourced scholarship.”

The mission of the DartmouthX program is to “expand access to learning for everyone, including Dartmouth lifelong learners,” says Joshua Kim, director of digital learning initiatives.

“We can’t stand still when it comes to learning at Dartmouth,” Kim says. “We need to experiment, try new things, and take advantage of the tools new digital technologies provide, while at the same time remaining committed to our core model of an intimate and rigorous liberal arts education. DartmouthX is one piece of the puzzle.”

To date, Kim says, Dartmouth created more than a dozen DartmouthX courses in subjects ranging from Italian opera to primate evolution to business management. Together, these courses have enrolled more than 140,000 students, nearly 70 percent of whom live outside the United States.

Past courses have included

In October, DartmouthX will launch seven courses in C Programming with Linux, an effort jointly developed with IMT from the Grandes Écoles in France. Students enrolled in these courses will have the option of earning a professional certificate—a new alternative credential from edX. Two other DartmouthX courses in business, developed by the Tuck School of Business—Omnichannel Strategy and Management and Leading Innovation—also offer a professional certificate option.