Plenty of events to come, from symposia to exhibits to football in Yankee Stadium. 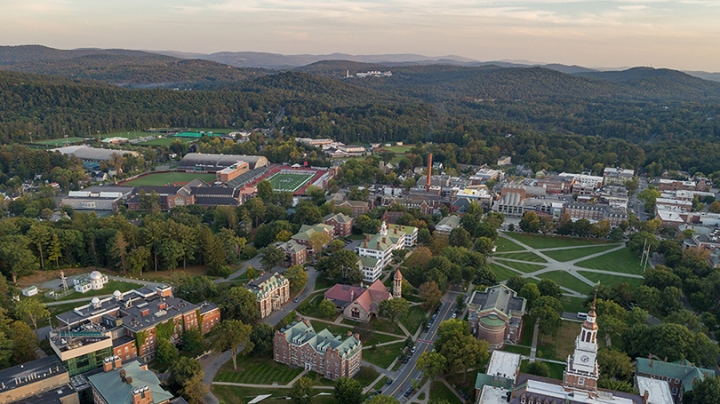 “Summer and fall will be filled with wonderful ways for the Dartmouth community to continue coming together to commemorate our past, share pride in current accomplishments, and plan for a future that will keep the College in the forefront of higher education,” says Cheryl Bascomb ’82, vice president for alumni relations and co-chair of Dartmouth 250.

The Call to Serve, through which Dartmouth community members find and document their volunteer work during the sestercentennial year, is well over halfway to its goal of 250,000 hours logged online. On the map showing volunteers’ locations, 49 out of 50 U.S. states are represented so far, as well as 15 countries, from Canada to China.

“This is terrific progress,” says Bascomb. “We know that Dartmouth people are already active in making their communities stronger, and that they are doing even more this year to make our 250th anniversary meaningful in their communities.

Fifty years ago—Dartmouth’s bicentennial year—the nation was in turmoil and American studies curricula were in flux. “1969: The Afterlives of ‘The Year Everything Changed’ ” will bring to campus for an Aug. 14-15 symposium scholars from the U.S., Germany, Italy, and Trinidad. Michael Denning ’77, the William R. Kenan Jr. Professor of Professor of American Studies at Yale, will deliver the keynote address. Symposium organizer and 250th Anniversary Co-Chair Donald Pease, the Ted and Helen Geisel Third Century Professor in the Humanities, says, “It will be a splendid event, and at the same time there will be a course taught by Randall Balmer, called ‘The Sixties.’ ”

Pease is also planning a symposium sponsored by Dartmouth’s Master of Arts in Liberal Studies Program “in which international students will speculate on the relationship between the aspirations of 1969 and what’s happening in their home countries.”

Two hundred and fifty years ago, worldwide events had ripple effects at Dartmouth. A Sept. 27-28 conference will look at how 18th-century global political economy shaped the founding of the College.

Over the past two-and-a-half centuries, Dartmouth’s community has become increasingly diverse. On Oct. 4, a symposium will invite alumni of color who have pursued academic careers over the past 50 years to discuss challenges they have faced.

On Nov. 8, “Women on the Faculty: A Dartmouth Centennial” will explore how women have broken glass ceilings in academia.

The legacy of Hispanic studies pioneer George Ticknor, Class of 1807, will be explored during a Nov. 1 symposium in his honor.

Veterans Day, Nov. 11, will be observed with a symposium, “Dartmouth’s History with the Military,” tracing milestones in the College’s relationship with the armed forces.

The “Celebration of Sciences” lecture series continues this fall, featuring guest alumni Paul Matsudaira, Guarini ’81 and the Distinguished Professor in the Department of Biological Sciences at the National University of Singapore; Fiona Harrison ’84, the Bernard M. Rosen Professor of Physics at California Institute of Technology; and K. Barry Sharpless ’63, the W.M. Keck Professor of Chemistry at the Scripps Research Institute and recipient of the 2001 Nobel Prize in chemistry.

On November 20, science faculty celebrate advances in scientific imaging made possible by Charles Young’s 1869 discovery of coronium, which led to the first x-ray being taken at Dartmouth and to advances in our understanding of the cosmos.

Planning is underway for a symposium, “Dartmouth’s Vexed Relationship to the Institution of Slavery,” to be held in conjunction with Associate Professor Deborah King’s sociology course, “Lest We Forget: History, Collective Memory, and Slavery at Dartmouth.”

From July 3-Sept. 18, the main hall of Dartmouth Library’s Baker-Berry Library will display a commemorative exhibit called “Generations of Community.” From Oct. 23-Dec.18, another anniversary exhibit, “Adventuresome Spirit,” will go up.

The Hood Museum of Art’s exhibition, “Art for Dartmouth: Celebrating the 250th,” is slated for September through December, and an October conference, “The New Now: Art, History, and Museums,” will feature Dartmouth graduates who have made important contributions to the art world.

The Orozco Murals, which have already been celebrated with a world premiere of a piece by the Dartmouth Symphony Orchestra, are getting their own computer app, which is still in development. A viewer will point the app at a mural to receive explanatory notes and commentaries about it.

The Green will be the place to be July 27, for a public party highlighting community and the arts. Celebrating the College’s ongoing relationship with Upper Valley communities, townspeople and families visiting for Sophomore Parents’ weekend will find concerts, films, food trucks, and information tables featuring a wide range of community organizations.

On Nov. 9, fans can head to New York to see Dartmouth face off against Princeton, as part of the 150th anniversary of football at Dartmouth. Tickets are on sale now.

Celebrations will continue off campus, including “Dartmouth on Location 250” events in Minneapolis and Philadelphia, culminating on Dec. 13—Charter Day—with a skating party and program in Cambridge, Mass. On that same day, around the world, the 250th Anniversary Celebration will end as it began, with landmarks lighting up in green.

For details on other forthcoming activities, check the 250 calendar of events listing, and connect with the Dartmouth community through Dartmouth Alumni, as well as on Facebook and Instagram. Tag your photos #Dartmouth250 to share your favorite Dartmouth memories and ways to celebrate.