More Rain Yet Less Water Predicted for Millions Along Nile 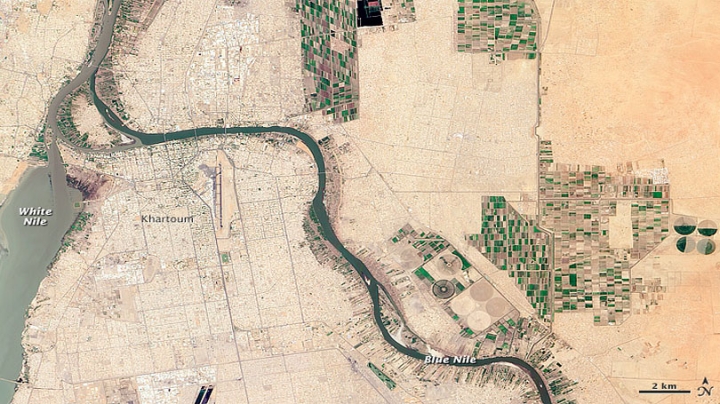 The main tributaries of the Nile River—the White Nile and the Blue Nile—meet in Khartoum, Sudan, a rain-poor city of nearly 2 million residents that relies on the Nile for irrigation. NASA Earth Observatory image by Jesse Allen and Robert Simmon, using EO-1 ALI data from the NASA EO-1 team.
9/05/2019
Body

In the coming decades, hot and dry conditions coupled with a rising population along the Nile River will reduce the amount of water available for residential, agricultural, and ecological uses. That’s the troubling conclusion of a new study led by Ethan Coffel, a fellow at the Neukom Institute for Computational Science.

“Climate extremes impact people,” says Coffel. “This study looks not only at high-level changes in temperature or rainfall, it also explains how those conditions will change life for real people.”

And those changes could alter the course of the Nile’s history in the not-too-distant future, according to findings by Coffel and Justin Mankin, an assistant professor of geography and senior researcher for the project, and colleagues. “The Nile has served as an oasis for water, food, commerce, transportation, and energy for thousands of years. But we show that the river won’t be able to consistently provide all of those competing services in the future,” says Mankin.

The Dartmouth research focused on the Upper Nile Basin, the chronically water-stressed region that includes western Ethiopia, South Sudan, and Uganda. Nearly all of the rain that feeds the Nile’s northward flow to Egypt and the Mediterranean Sea falls in this area.

The problem is that the Upper Nile Basin is being affected by two seemingly contradictory effects of climate change. On the one hand, using a mix of available climate models, the study predicts an increase in regional precipitation for the remainder of this century. The projected upward trend in precipitation comes as a result of increased atmospheric moisture normally associated with warming.

At the same time, however, the study finds that hot and dry years in the region have become more frequent over the past four decades. This trend is projected to continue throughout the century with the frequency of hot and dry years as much as tripling.

Further complicating conditions, population in the region is projected to nearly double by 2080, which will impose additional demands on water resources.

As a result, the study finds, increased evaporation from higher temperatures combined with the doubling of runoff demand from a larger population will counteract any projected increase in rainfall. The trend of increased precipitation will simply be too slow to result in significant changes in runoff over the time periods studied.

“At first glance you would expect more rain to reduce scarcity, but not on the Nile. The dice are loaded for additional hot and dry years in the future, meaning increasing shocks to households because of crop yield declines, and less water available to make households resilient against warming temperatures,” says Mankin.

According to the study, annual demand for water runoff from the Nile will regularly exceed supply by 2030, causing the percentage of the Upper Nile population expected to suffer from water scarcity to rise sharply. By 2080, the study estimates that as much as 65 percent of the regional population—250 million people—could face chronic water scarcity during excessively hot and dry years.

“The Nile Basin is one of several fast-growing, predominantly agricultural regions that are really on the brink of severe water scarcity,” says Coffel. “Environmental stresses could easily contribute to migration—and even conflict.”