Kull, the Rodgers Professor of Chemistry, will serve another four-year term. 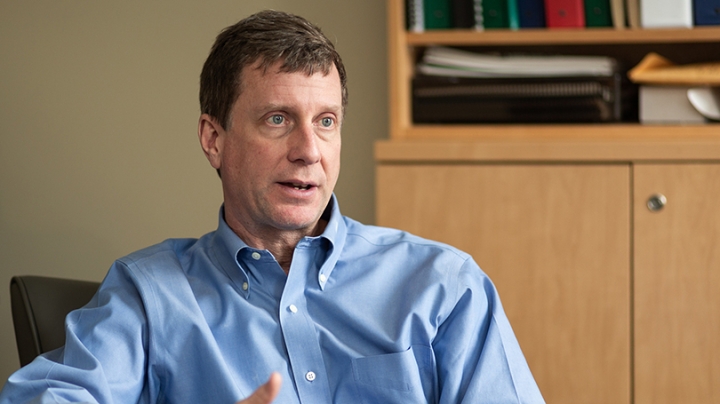 “It’s been a privilege to work with the president, the board of trustees, and senior leadership to help the school get established and take shape,” says Jon Kull ’88, who has been reappointed dean of the Guarini School. (Photo by Rob Strong ’04)
5/06/2020
Body

Jon Kull ’88, the inaugural dean of the Frank J. Guarini School of Graduate and Advanced Studies, has been reappointed to a four-year term, Provost Joseph Helble announced today.

“In his tenure, Jon has brought the experience of an accomplished research scientist, the vision of an entrepreneur, and a deep love for his alma mater to the project of launching the Guarini School—Dartmouth’s first new school in over a century,” says Helble. “I look forward to continuing to work with Jon as he builds on this strong foundation in his next term.”

Kull, a structural biologist and the Rodgers Professor of Chemistry, was appointed dean of graduate studies in 2012. He oversaw the transition from a graduate program to the creation of the School of Graduate and Advanced Studies in 2016. Two years later, in 2018, the school received a naming gift from former New Jersey congressman and U.S. representative to the United Nations Frank J. Guarini ’46.

The Guarini School supports more than 1,000 graduate students, doctoral candidates, and postdoctoral scholars in 35 programs throughout the arts and sciences and Thayer School of Engineering.

In December, the school hosted the first meeting of its advisory board, and in January moved into its new home in Anonymous Hall, the renovated former site of the Dana Biomedical Library.

“It’s been a privilege to work with the president, the board of trustees, and senior leadership to help the school get established and take shape,” Kull says. “The past four years have about getting the school up and running, securing the naming gift, and forming an advisory board. Now we can start to really shape Dartmouth’s vision for the Guarini School.”

The Vision for Guarini

That vision includes working with the Graduate Student Council and the Campus Climate and Culture Initiative to increase mentorship training and support for faculty advisers; serving as a platform for any new graduate programs developed by the faculty; and expanding supplemental curricular offerings, such as the PhD Innovation Program, which lets PhD candidates interested in entrepreneurship take courses at Thayer and the Tuck School of Business while working on their PhD. Similar ideas are being discussed for programs to help graduate students in the sciences learn the ins and outs of public policy.

“One of our strengths—and this builds on Dartmouth’s historic strength in the liberal arts—is to provide graduate students with training customized to what they want to do,” Kull says. “If you want to go into academia, we can get you connected to DCAL and they can help you learn to make your classroom more interactive. If you’re interested in going into industry, Guarini can help you find internships and expertise from our alumni. If you’re interested in entrepreneurship, we’ve got the PhD Innovation Program.”

Significantly, Guarini is the home to a growing community of postdoctoral scholars, including, among others, members of the interdisciplinary Society of Fellows and The Provost’s Fellowship Program, geared toward fostering diversity in the professoriate.

“Dartmouth has more than 200 postdocs doing research across many disciplines,” Kull says. “Over the past four years, we’ve established a position of assistant dean for postdoctoral affairs, and we’ve been able to significantly expand support of postdocs, as well as programs for their professional development and training.”

Another Guarini strength: its scale. “Dartmouth’s research groups are comparatively small, which means students have more access to their advisers than they might at a large research university. We want to maintain that tightknit community,” he says. “Because Guarini overlaps with Arts and Sciences, Thayer, Geisel, and Tuck, it’s easy for us to foster collaborations. That’s one of Dartmouth’s great strengths, our ability to get a bunch of researchers from different departments and schools all working on similar questions.”

Kull’s own research into the structure and function of proteins benefited profoundly from a long-term research partnership with the late Ron Taylor, a professor of microbiology and immunology at Geisel.

“Ron studied cholera, and he had some proteins critical for causing virulence that we wanted to look at on the structural level in order to figure out how they worked,” Kull says. “We had a productive collaboration for years. I’m still collaborating with people from his research group.”

Kull’s reappointment comes in the midst of the COVID-19 pandemic that has ramped down research activities in most laboratories.

“This is an unusually difficult and stressful time for everyone,” says Kull. “There are nearly 1,000 graduate and professional students living in the Upper Valley, and the Guarini staff is trying to keep in touch with them to help with issues they might be dealing with,” from connecting students with health and counseling resources to supporting those who may need to extend their studies.

“This is a good time for students to look at their data, plan future experiments, and write that paper or grant application they’ve been thinking about. I know students are eager to get back into the lab, and once on-campus research ramps back up, I expect we will be able to get things running again quickly.”