The biology professor has been recognized for his research on plant hormones. 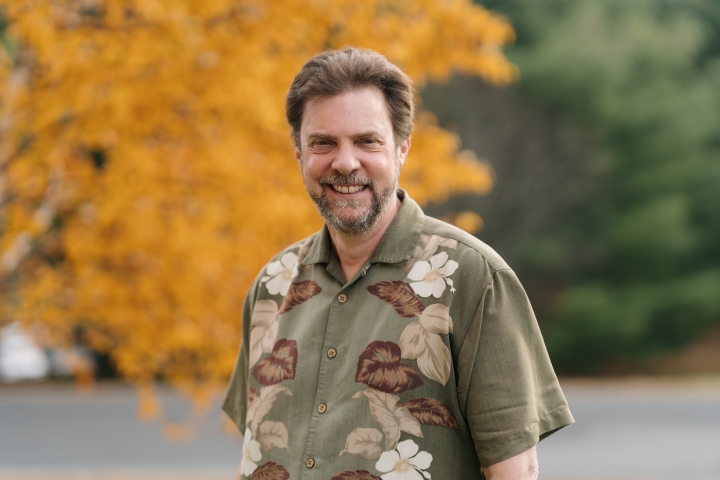 Professor G. Eric Schaller, a professor of biological sciences and of molecular and cellular biology, is among 489 scholars awarded the honor this year. (Photo by Eli Burakian ’00)
11/23/2020
Body

Citing his “distinguished contributions to the field of plant signaling, particularly for novel insights into plant hormone biology,” the American Association for the Advancement of Science has named G. Eric Schaller an AAAS Fellow.

Schaller, a professor of biological sciences and of molecular and cellular biology, is among 489 scholars awarded the honor this year for “scientifically or socially distinguished efforts to advance science or its applications,” according to an announcement from AAAS, the world’s largest general scientific society and the publisher of the journal Science.

“This is a well-deserved recognition,” says Provost Joseph Helble, who was named an AAAS Fellow in 2017. “Eric is an innovative scholar and teacher and a leader of collaborative and interdisciplinary approaches to questions of how plant hormones function.”

Schaller’s research group focuses on the study of plant hormones such as ethylene and cytokinin, which have critical applications in agriculture and other industries. For instance, ethylene stimulates ripening and rotting in fruit, and is a key chemical in plastics such as polyethylene, while cytokinin regulates grain yields.

Schaller and his team have been using genomic techniques to help understand how mutations in the genes that regulate hormone signaling affect plants at the level of a single cell.

“It’s amazing what new technologies are bringing to what are in some ways older questions,” he says. “There are methods that have just been developed in the past few years where you can basically separate out a single cell, figure out exactly what genes are being expressed, and determine developmental patterns among cells. It gets to a level of fineness that almost seems impossible to believe, but it’s happening.”

A collaboration with Associate Professor of Computer Science Gevorg Grigoryan is shedding light on ethylene receptors—the proteins that bind ethylene in a plant. Schaller says that understanding the binding site may ultimately have commercial applications—for instance, helping to develop nanosensors to detect the hormone’s presence.

“One of the reasons I like Dartmouth is the possibility for collaboration,” Schaller says. “We’re still trying to figure out what the binding site actually looks like, which I find fascinating.”

Schaller grew up immersed in scientific research as he traveled the world with his father, renowned conservationist and wildlife biologist George Schaller.

“Growing up, we’d be out in the field taking notes in our own little notebooks as kids, so I was always around science,” Schaller says. “But I always liked molecular projects; that was a natural affinity for me. And I developed an affinity for communication networks, which is really what hormones do—they’re a signal that communicates downstream to somewhere else in the organism. It’s a little like science fiction exploration when you’re trying to figure out who’s talking to whom in this little alien environment of the cell.”

When he’s not in the lab, Schaller applies his scientific knowledge to a different creative pursuit—writing short fiction. One of the stories in his debut collection Meet Me in the Middle of the Air (which earned a starred review from Publisher’s Weekly in 2016) features a parasite that takes over a character’s tongue, based on a fish parasite Schaller had read about in a biology book.

Writing fiction “is like breathing a different type of air,” Schaller says.

“In science there’s a certain level of detail and trying to figure out how things work, which in some ways translates to writing, because you’re trying to find a way that communicates well. But you’re allowed to make things up, which we try not to do in science,” he says, laughing. “And fiction is more character-based, whereas in science intentionally you’re supposed to take the person out of the story you’re telling.”

Of being named a AAAS Fellow, Schaller says, “It’s a wonderful honor and a validation of how the scientific community sees the research that’s been going on with the group I have collaborating with me in the lab. I see it as not just recognizing me so much as the body of research and the people as a group who have been involved in it.”