The scholar of Russian cultural memory will spend three years at the University of Helsinki. 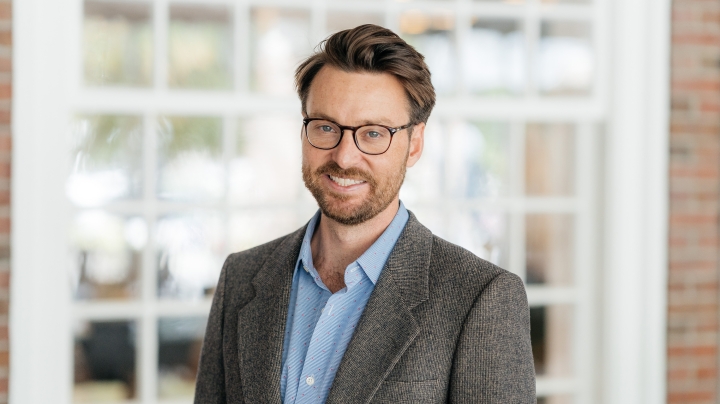 Sean Griffin, a lecturer in Russian, religion, and MALS, came to Dartmouth as a postdoctoral fellow in the Society of Fellows. (Photo by Eli Burakian ’00)
4/07/2021
Body

Sean Griffin, a lecturer in Russian, religion, and the Master of Liberal Studies (MALS) Program, has received a Luce/ACLS Fellowship from the American Council of Learned Societies and a fellowship from the Helsinki Collegium for Advanced Studies at the University of Helsinki.

The awards will permit him to spend the next three years in Finland researching and writing his second book, The Second Baptism of Rus: Cultural Memory after Communism, which is under contract with Cornell University Press.

“It’s such a gift—the gift of time, to be able to devote yourself entirely to research and writing,” says Griffin. “To have fellowship foundations like Luce/ACLS and the Collegium for Advanced Studies invest in me and say they think this project is important—I’m just so grateful. Without this kind of support, the book might never see the light of day.”

Griffin came to Dartmouth in 2017 as a postdoctoral fellow of the interdisciplinary Society of Fellows—an experience that gave him time to complete his first book, The Liturgical Past in Byzantium and Early Rus, which won the 2020 W. Bruce Lincoln Book Prize from the Association for Slavic, East European, and Eurasian Studies, and the 2021 Ecclesiastical Society Book Prize.

“The Society of Fellows is giving young scholars the opportunity to mature, to develop, to emerge,” Griffin says. “Without it, I don’t know that I would still be in academia, or that I would have published my book.”

His current research—into more recent developments in Russian cultural memory—grew out of that first project, which focused on the medieval period of the Russian Orthodox Church.

“I was studying the most ancient Russian/Ukrainian/Belarusian historical text—what’s known as the Rus Primary Chronicle—and I was able to show that what I call the origin myth of Christian Rus actually originated in the liturgical services of the Byzantine empire,” Griffin says. “The key figure in that is Prince Vladimir”—the 10th-century ruler who Christianized that region of the world.

While in Europe to research that project, Griffin happened to see a news broadcast about Russian president Vladimir Putin and the Russian Orthodox Patriarch Kirill. “They were consecrating this gigantic new monument to Prince Vladimir the Great right outside the walls of the Kremlin,” Griffin says. He wanted to understand why.

“I’m a historian of the Russian Orthodox Church and I’m a scholar of cultural memory, so I was very curious about the background story of this monument. And that led me down this incredible rabbit hole where I find out that for the Russians, Prince Vladimir is basically the symbol of a new post-Soviet political ideology aimed at preserving the former dimensions of the Russian empire and the Soviet Union.”

But in Ukraine, Vladimir is likewise seen as a national symbol. “For the Ukrainians, Vladimir is supposedly the man who baptized Ukraine in 988 so that it could enter into the European Union—even though the modern nation state of Ukraine did not exist then. So they basically make Vladimir a Ukrainian nationalist.”

In The Second Baptism of Rus, Griffin will explore the transforming cultural memories of Prince Vladimir; of the Russian Revolution of 1918 and the continuing legacy of the Romanovs, the deposed Russian imperial family; and of the Stalinist era and World War II.

“What is it when a group has a cultural memory?” Griffin asks. “We remember in order to belong. This is how we create the imagined political community of the nation—we tell ourselves a shared story about the past. It doesn’t matter whether that story is factually true when it comes to the politics of memory. What matters is that it binds a group of people into a coherent political entity.”

Of his time at Dartmouth, Griffin says, “I love living in Europe, and my family is very excited, but we’re leaving with real sadness. My two kids were born here. I’ve enjoyed being a part of the Russian department and the religion department. Dartmouth and the Hanover community have become our home, and we will miss being here.”